Is this generation of fresh graduates too cocky? Or are we refusing to acknowledge our country’s flawed job market?

On this week’s edition of controversial online discourse, Filipinos on social media are unpacking capitalism and modern day exploitation. It was sparked after Twitter user Kume expressed his frustrations with an applicant from Ateneo who declined his job offer because of a disagreement on her starting salary. 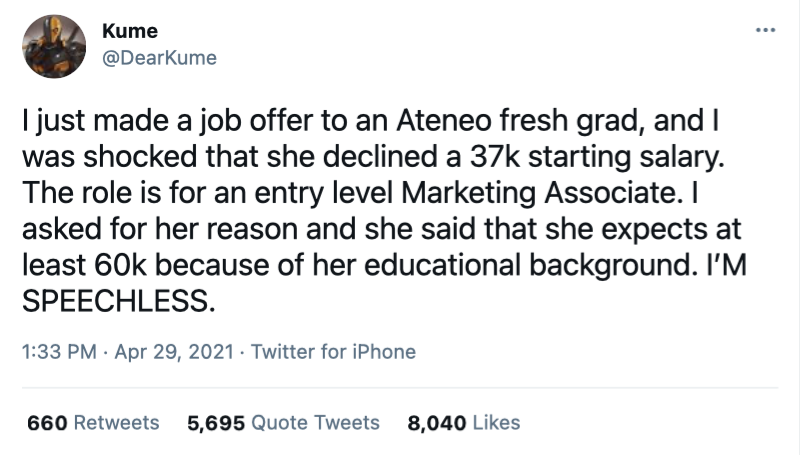 Kume added to his thread to explain that his sentiments weren’t meant to pin Ateneo graduates per se, but rather he was shocked to encounter an applicant who rejected a salary that was considered high for an entry-level job by his standards.

“What kind of mindset do kids have these days? Are they simply out of touch with reality, or were they brought up to think they deserve such huge salaries right off the bat?” he tweeted.

While it doesn’t make sense to single out this applicant to reflect all fresh grads, and we are especially in no place to criticize a newly minted adult and how they choose to start their career — perhaps this thread reveals more about the job market in the Philippines than we think.

As expected, the tweet elicited mixed responses from other Twitter users. Many argued that 37k isn’t enough to cover the cost of living in Manila. While some replied to Kume sharing that their starting salary was even lower than what he offered.

But even if she’s neither of these things, living in Manila is expensive. This tweet was obviously meant to highlight the fact she’s from Ateneo. https://t.co/W3x3tA8tjU

The responses certainly paint a bigger picture than we anticipated from the original tweet. Whether you believe she should’ve taken the job or not, most Filipino professionals (regardless of experience) are not being paid a livable wage — or just barely getting by.

There are a lot of other factors to take into consideration when accepting a job offer. Will the work stated in the job description fairly amount to your compensation? Is another company offering a higher salary? Do you see yourself growing with the company? Most importantly, does your household depend on you to survive?

Students of top universities like Ateneo don’t all come from well-off families. Despite the high tuition, parents will choose to invest in their child’s education because they believe it will help propel their future — ultimately improving their way of life. So when these students study hard and graduate with high distinctions, of course they’ll expect for their parent’s investment to be rewarded.

However, not everyone is as lucky to even be given the option to choose. It all comes down to one thing — privilege.

Graduates from low-income families have no choice but to accept the first offer they get, even if it’s lower than what they asked for, because people are counting on them. They don’t have the privilege to wait for another offer.

Depending on your line of work, the minimum wage for your industry may just be too low to begin with. In turn, they also don’t have the privilege to negotiate.

If there’s anything that Filipinos should get out of Kume’s thread, it’s that our job market is so flawed that we’ve normalized exploitation in the labor force. Fresh grads are expected to abide by these salaries because it’s “realistic” and standardized. 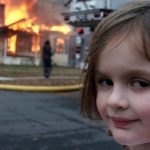 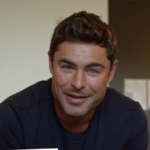