Hotel bans all bloggers from business and ends up with more social media attention!

The feud started after Darby reached out to the owner of White Moose Cafe asking for a possible collaboration. She asked if she can feature their hotel on her YouTube and Instagram accounts to drive traffic in exchange for a free stay. But instead of just replying to the email, the owner, Paul Stenson, posted on their Facebook page a lengthy response to Darby that has gone viral with over 28K reactions, 4.2 comments, and 3.6K shares. 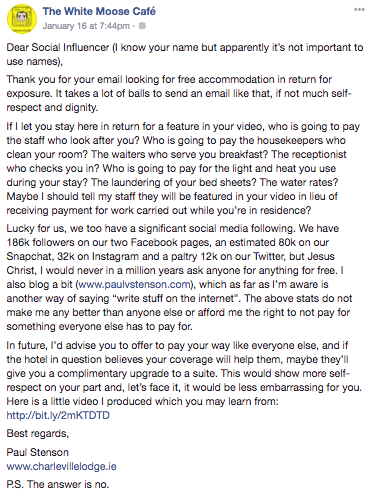 Though Darby wasn’t named in their post, people were quick to figure out that it was her and criticized her for what she did. Due to the negative backlash, Darby couldn’t help but speak her mind about the issue. She uploaded a video on her official YouTube account explaining that she has never received such a rude response after sending a business proposal with nothing but “the purest intention.” And she further added that she doesn’t know why the hotel owner decided to post on public the email she sent in confidence.

After Darby explained her side of the story, the hotel had to deal with the negative comments and bad reviews as well. So Stenson decided to ban all bloggers in their hotel. In their Facebook page, Stenson made an official announcement in all caps that: “ALL BLOGGERS BANNED FROM BUSINESS” followed by an explanation: I know I haven’t spoken about it much but I just wanted to finish off this weird week with a little message. x

And ever since the issue came out online, people have voiced mixed responses about it. Some were sarcastic and criticized Darby for what she did. 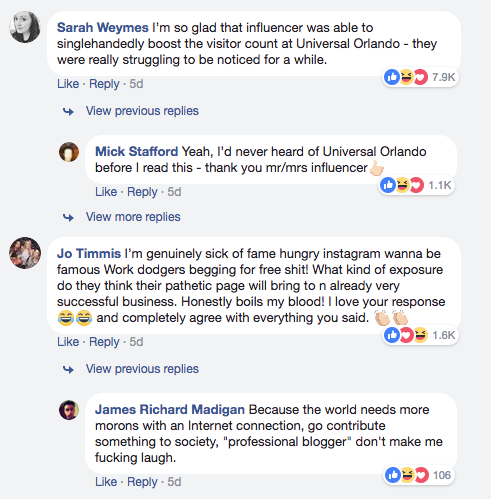 While others bashed the hotel for being “unprofessional.”

But what’s ironic and hilarious about this controversy is that the hotel even gained more social media attention because of it without spending a single cent.

And their social media manager is perfectly aware of that!

Two thumbs up for turning the odds in your favor!