A young couple in South Korea took “interpretive art” a little too literally when they mistakenly vandalized a canvas painting by American graffiti artist JonOne.

The abstract piece was part of a mall exhibit in Seoul. A number of brushes and jars of paint were scattered in front of the canvas as part of the display, which led the couple to assume that they were free to add to the artwork. The gallery staff noticed new dark green brush strokes on the painting and alerted security to check the surveillance footage.

Upon inspection, they were able to spot the suspects and the couple was immediately arrested by the police for investigation.

Kang Wook, the co-organizer of the exhibit, released the couple without charges as they explained to the agency that their actions were not done in malice.

“We are currently in discussions with the artist about whether to restore it. But as the agency in charge, we will do best to minimize the harm to the couple who unintentionally vandalized the work,” said Kang Wook.

Since the incident, the gallery added a barrier and “do not touch” sign in front of it in order to prevent the painting from getting vandalized again.

A representative of JonOne shared that the artist “does not plan to respond to the incident.” 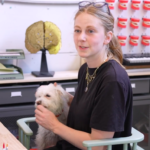 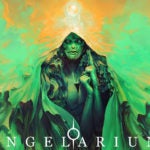 Biblically accurate angels made right: The art of Peter Mohrbacher