Follow us:
"Street Scene in Montmartre" by Vincent van Gogh. Image: courtesy of Sotheby's via ETX Daily Up

One of the few paintings by Vincent Van Gogh still in private hands sold for more than 13 million euros at auction Thursday, Sotheby’s said.

“Street Scene in Montmartre,” on public display for the first time since its creation in 1887, after a century in the same collection, fetched 13.09 million euros ($15.4 million), the auction house said.

At well above the estimate of 5 to 8 million euros, the sale price was a record for the artist in France, it added.

The painting was the highlight of an auction of 33 works from masters including Degas, Magritte, Modigliani, Klee, Rodin and his muse Camille Claudel sold in an auction live-streamed by Sotheby’s in Paris.

The painting was re-offered at the end of the sale in Paris, after the auction house scrapped its initial sale earlier in the afternoon, where it fetched a slightly higher sale price, due to problems with online bidding.

Other highlights included the sale of a recently restored work by Camille Pissarro, “La Recolte des pois,” which fetched 3.38 million euros. It had been originally commissioned by Van Gogh’s brother, Theo.

The 1887 Van Gogh, one of more than 200 paintings produced by the Dutch post-Impressionist master during two years spent in Paris, portrays one of the windmills that dotted Montmartre when it was just a village on the northern outskirts of the capital.

A couple stroll and two children play in front of a wooden fence and leafless trees depicted in the characteristic tan and brown tones of his “Dutch palette,” punctuated by a bright red flag blowing above the mill.

The period marked a turning point in Van Gogh’s career as he began exploring expressionist techniques and new uses of colour in the final years of his life, before his suicide in 1890 at the age of 37.

It is not considered one of his best works.

Specialists knew of the work but it was only catalogued as a black-and-white photograph and was acquired by a French family around 1920.

This week it was placed on public display for the very first time since it was painted 135 years ago.

“Paintings from the Montmartre series are rare: It’s very likely to garner a lot of interest from private buyers, the major Van Gogh collectors all around the world, and probably from institutions as well,” Aurelie Vandevoorde, Sotheby’s head of Impressionist and modern art in Paris, told AFP ahead of the sale. 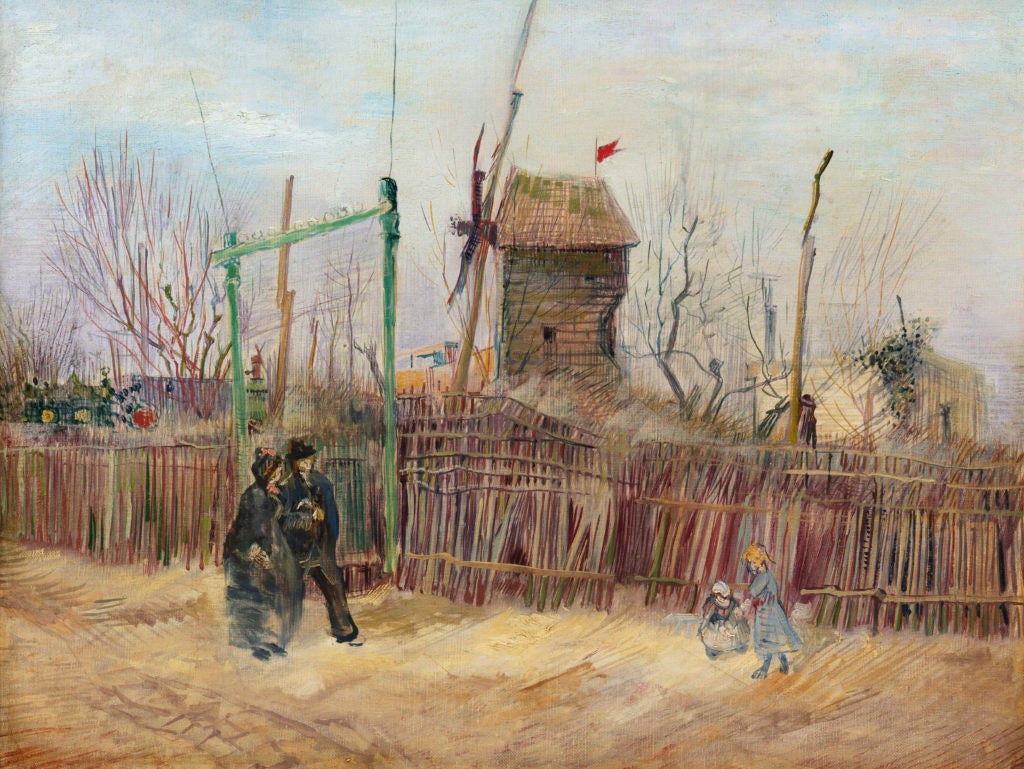 “Street Scene in Montmartre” by Vincent Van Gogh. Image: courtesy of Sotheby’s via ETX Daily Up

The identity of the buyer has not been divulged, but Claudia Mercier, an auctioneer at the Mirabaud Mercier auction house that was hired by the painting’s owners, said it had been examined by the Van Gogh museum in Amsterdam, “which has shown serious interest in the work.”

Among other landmark works auctioned at the double sale of impressionist and modern art at Sotheby’s in Paris and London was a pastel by Edgar Degas called “Dancer” sold for 2.6 million euros ($3 million).

In the British capital, a portrait of the photographer Dora Maar by Pablo Picasso went for 9.3 million pounds ($12.7 million).

A triptych in spring tones by British painter David Hockney, one of the most expensive living artists in the world, did not exceed 6.1 million pounds in final bidding, below initial estimates.

A bigger success, in contrast, was for “Embrace on the beach” by Norwegian painter Edvard Munch, which sold for 16.2 million pounds ($22.2 million).

The painting was briefly owned by top Nazi official Hermann Goring, despite Munch’s official designation as a “degenerate” artist by the Third Reich.

A self-portrait by the mercurial Norwegian painter also sold for 3.1 million pounds, lower than estimates. JB