Facebook user discovers the ‘Law of Classroom’ book, claims Kim Chiu was ‘right all along’

Last May 5, the National Telecommunications Commission (NTC) issued an order to stop the nationwide broadcasting of the media network, ABS-CBN due to the absence of a “valid Congressional Franchise required by law”.

Because of the NTC’s decision, which shocked the public, celebrities like Coco Martin, Kathryn Bernardo, and Daniel Padilla bravely expressed their opinions online regarding the issue.

But one of the most controversial statements is from Kapamilya actress, Kim Chiu. In fact, a snippet from her interview went viral after she had used an analogy of “classroom law”, which confused a lot of viewers. Later on, her statement spawned a plethora of memes, songs, and even a TikTok dance craze.

The actress quickly apologized for her mistake and admitted that she also got confused upon watching her interview—unfortunately, the bashing continues.

Recently, Facebook user John Patrick Pineda shared a post about the “Law of Classroom” book in a public group Narinig Ko Sa UP (Overheard at UP). According to Pineda, Chiu’s analogy was “right all along”.

It was a thick book with an old cover that says Modern Philippine Legal Forms, Volume 1. This prompted online users to ask whether there are succeeding volumes of the said book and what page they can check out the “bawal lumabas” context. 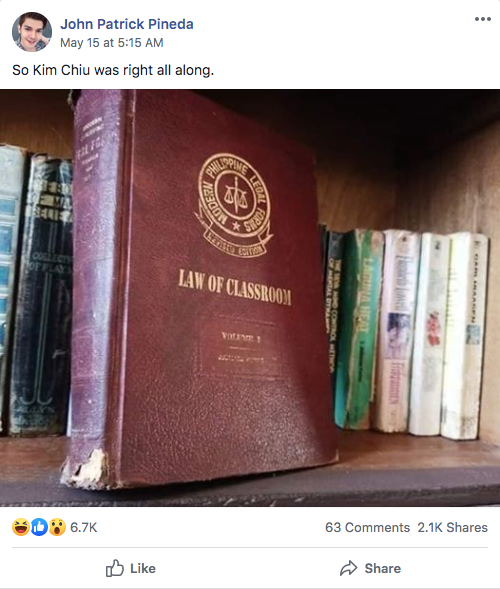 Pineda’s post has gone viral with more than 6,000 reactions and 2,000 comments, as of this writing.

Instead of becoming a laughing stock, Chiu decided to just complete the song and make it sound more inspirational. Together with Adrian Cristanto (songwriter) and DJ Squammy (beat producer), the actress released the full version of Bawal Lumabas (The Classroom Song).

Facebook user gets bored, decides to fly a large ‘underwear’ kite in the sky

ABSCBN
Bawal Lumabas (The Classroom Song)
Kim Chiu
Law of Classroom
INQPOP! Stories we think you might also like: