There’s no denying that Cherie Gil is one of the most powerful actresses in the country. She’s best known for her kontrabida roles, especially the iconic Lavinia Arguelles in the hit 1986 film “Bituing Walang Ningning”.

In the movie, she plays a famous singer who got overshadowed by her number one fan Dorina Pineda, portrayed by Megastar Sharon Cuneta. The scene where she delivered the famous line “You’re nothing but a second-rate, trying hard copycat!” and threw wine across Sharon’s face became one of the best references of today’s generation of kontrabidas. The scene proved to be timeless and iconic even for people who weren’t even born when the film premiered.

Recently, Cherie Gil dedicated an Instagram account to her villainous character Lavinia and is now on a mission “to arrive to 100 victims of this 1986 iconic scene with every relevant person I meet now in the 21st century.” 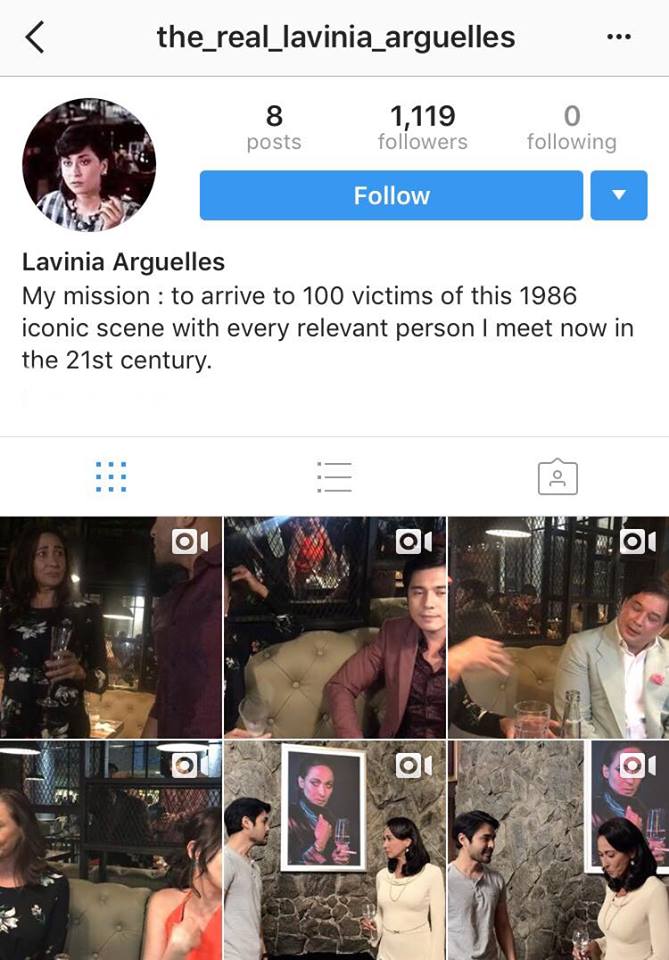 The account shows videos of her recreating that iconic scene with several notable personalities and it’s just perfect! We stan an iconic KWEEN!

This take one with Atom Araullo a.k.a “the man with the force field” is just hilarious!

Bea Alonzo also gladly volunteered to be one of the “victims” and honestly, who wouldn’t want to recreate this scene with the legendary actress that is Cherie Gil!

This video with Ricky Davao started out as a typical “inuman scene” and took a surprising turn.

Her “Kasal” co-star Paulo Avelino also wasn’t spared from Lavinia’s drink-throwing skills! We are one with those who screamed at the end of the video.

Derek Ramsay also had a taste of this “copycat” scene—only, there’s a plot twist!

If Cherie Gil is still looking for more victims to complete her quest, we can all gladly say: WE VOLUNTEER AS TRIBUTE!