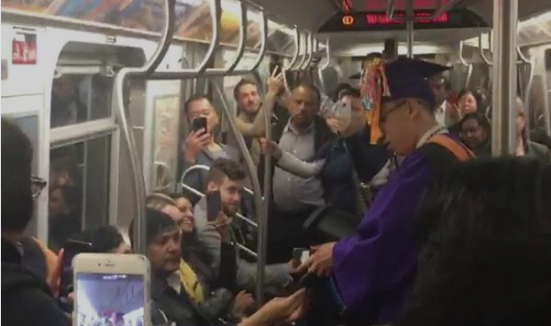 Almost everyday, Filipinos experience the struggles of commuting in the country: the endless heavy traffic, long lines that prove forever does exist, and in some horrendous cases, getting stuck on a train for hours. We all know how our trains beat us up whenever technical malfunctions happen—making us miss work, classes, and scheduled appointments for the day.

But if you ever think you have it bad, you’re not alone. There’s a student in New York City (NYC) who missed his graduation ceremony because he got stuck on the subway for two hours.

On the day of his graduation, Jerich Marco Alcantara took the NYC subway to make it to Hunter-Bellevue School of Nursing. But instead of accepting his diploma onstage, his friends and other passengers threw him a “subway graduation.”

Poor kid missed his graduation because of the train delay this morning….so we threw him a graduation on the train.

According to his comment on a Facebook post, he and his friends left early; they could’ve been 40-60 minutes early for graduation if the train never had a problem. But the emergency brakes on the train went off—leaving them and other passengers stuck for two hours until a rescue train came.

NYC subway passengers held a ceremony for student who missed his graduation because of a delayed train. @MTA WYD? https://t.co/aaJ8NbQY2H pic.twitter.com/SLHA7OF3x6

Knowing that they’re already late for the commencement, his friends decided to create him a “diploma” and give him a graduation experience on the train. Someone also blasted “Good Riddance (Time of Your Life)” by Green Day and the passengers applauded and congratulated him.

When he and his friends got to his school, Alcantara told Select All that the auditorium was already cleared out so his friends threw him his own little graduation. He missed the actual ceremony but he got to experience two “cooler” graduations that day.

“I think it ended up so much better than if I was on time. I would have probably fell asleep if I was at commencement,” Alcantara told WABC.

Who would’ve thought that missing his graduation would still be a great day for him? With a little help from his friends and other passengers on that train, Jerich still had one of the best days of his life.

See, THIS is what friends are for and why our faith in humanity lives on. 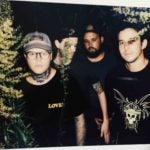 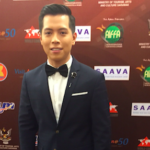