Follow us:
About 200 young girls spent the night aboard the USS Midway Museum to learn how to be Navy pilots in celebration of Girls in Aviation Day. Image: Facebook/WAI San Diego 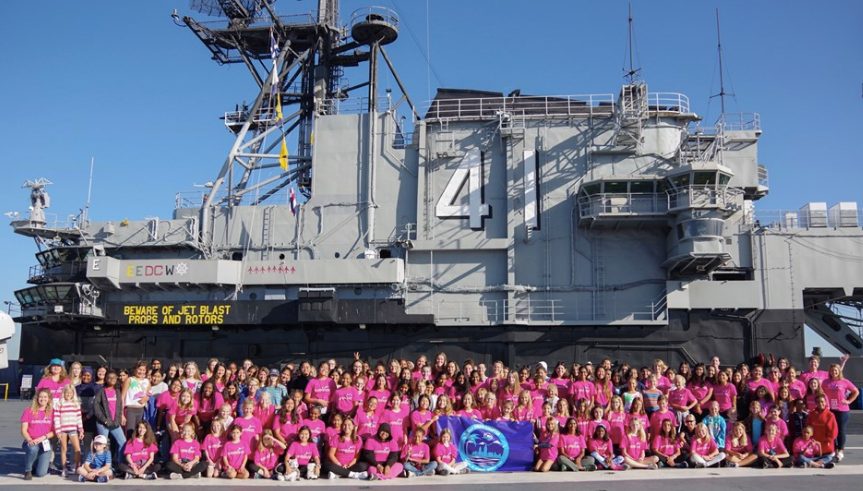 About 200 young girls spent the night aboard the USS Midway Museum to learn how to be Navy pilots in celebration of Girls in Aviation Day.  Image: Facebook/WAI San Diego

About 200 young girls spent the night aboard the USS Midway Museum in San Diego, California, USA, where they experienced what it is like to work in aviation, in celebration of Girls in Aviation Day on Oct. 5.

The USS Midway is known as the longest-serving aircraft carrier in the 20th century and played key roles in the Cold War and the Vietnam War. It was decommissioned in San Diego in April 1992 and was turned into the USS Midway Museum in 2004.

Hordes of young girls aged 8 to 17 years took to the museum for their overnight adventure, as per NBC San Diego on Oct. 6, where they learned how to be a landing signal officer and be a part of a flight deck crew. The young girls also had the chance to meet women who worked in the field, such as air traffic controllers, pilots and flight school instructors.

“The purpose is to inspire young girls to learn about careers in aviation, to know that they can be anything they want to be,” said Jill Meyers, Women in Aviation San Diego Chapter president, in the report. “Getting them exposed to people, women in the field that they may be in and getting to talk to them, I think, is going to be one of the most inspiring things.”

One of the speakers in the event was US Navy Capt. Tamara “T’Lo” Graham, as per the Women in Aviation (WAI) San Diego Chapter’s Facebook post on Oct. 9. Graham is an H-60 Seahawk naval helicopter pilot and has been deployed in the Middle East. She also served for three years as chief of staff and vice president of the US Naval War College in Newport, Rhode Island, among many achievements.

“Her presentation was inspiring to all, and the girls were still talking about it the next day, as were the Midway staff!” said WAI San Diego. “T’Lo has been a partner of our chapter since 2015 and we so appreciate all of her assistance, guidance, leadership and passion for inspiring young girls to be all they can be.”

All of us at WAI San Diego want to express a very special THANK YOU to U.S. Navy Captain Tamara "T'Lo" Graham, who came…

Posted by WAISanDiego on Wednesday, October 9, 2019

Raising awareness for gender equality and women empowerment in the global aviation industry has been one of the goals of the International Aviation Women’s Association (IAWA) and the International Civil Aviation Organization (ICAO). As per their joint statement during a forum on gender equality in aviation in Montreal, Canada, in October 2016, IAWA and ICAO recalled their partnership to focus on the next generation of aviation professionals by encouraging girls to pursue careers in the field.  Cody Cepeda /ra