MANILA, Philippines – In the digital age, finding an audience for your craft has become convenient. And though there’s far from a lack of a potential audience online, it would still take a lot to build your following. The question remains: What would it take to stand out? Creativity is the obvious answer, but it’s not something that easily comes whenever you need it. Which is why it’s great that something like SCOUT Creative Talks exists.

On Oct. 12, professionals from different creative fields will be gathered at Samsung Hall, SM Aura Premier, from 9 a.m. to 6 p.m., to help fellow creatives out of their creative rut. 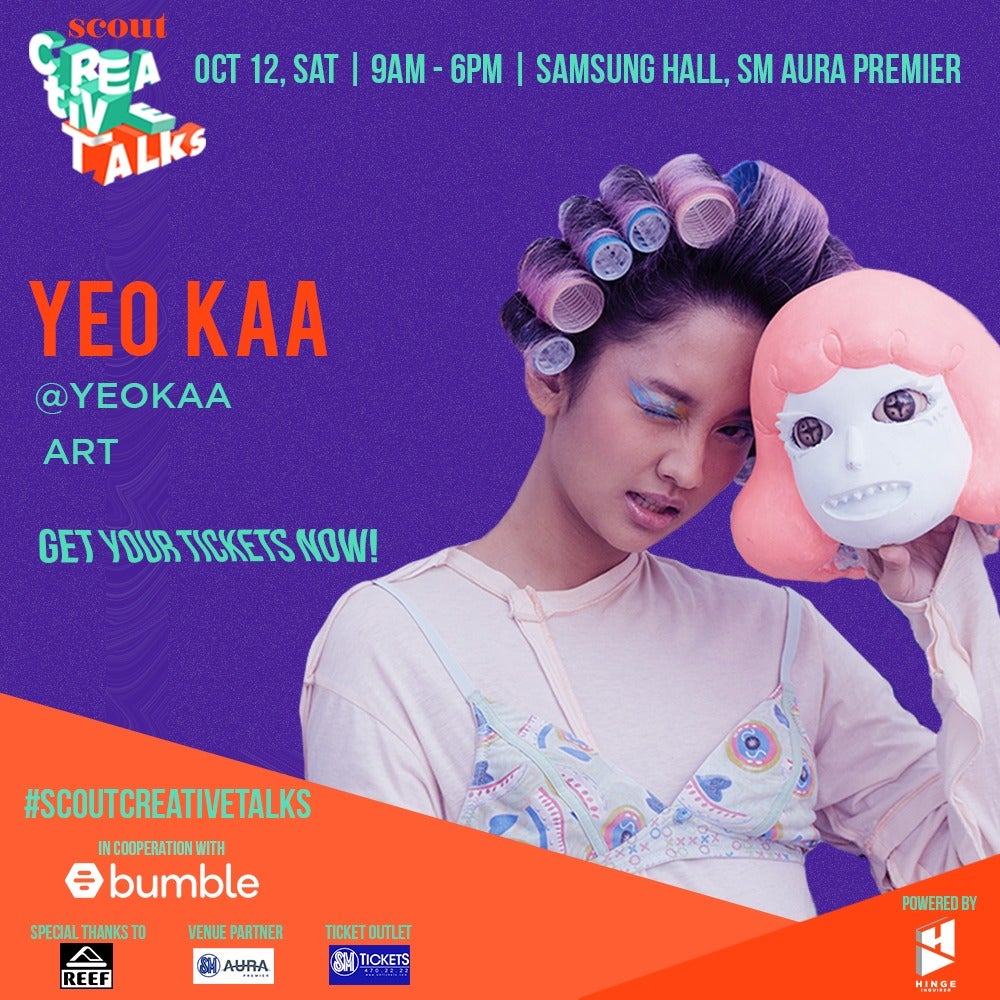 YEO KAA is an artist whose style uses bright colors that address themes like mental health and crime. Her artworks feature an iconic doll that has been exhibited locally and internationally, including Art Fair Philippines, Art021, and Sydney Contemporary. 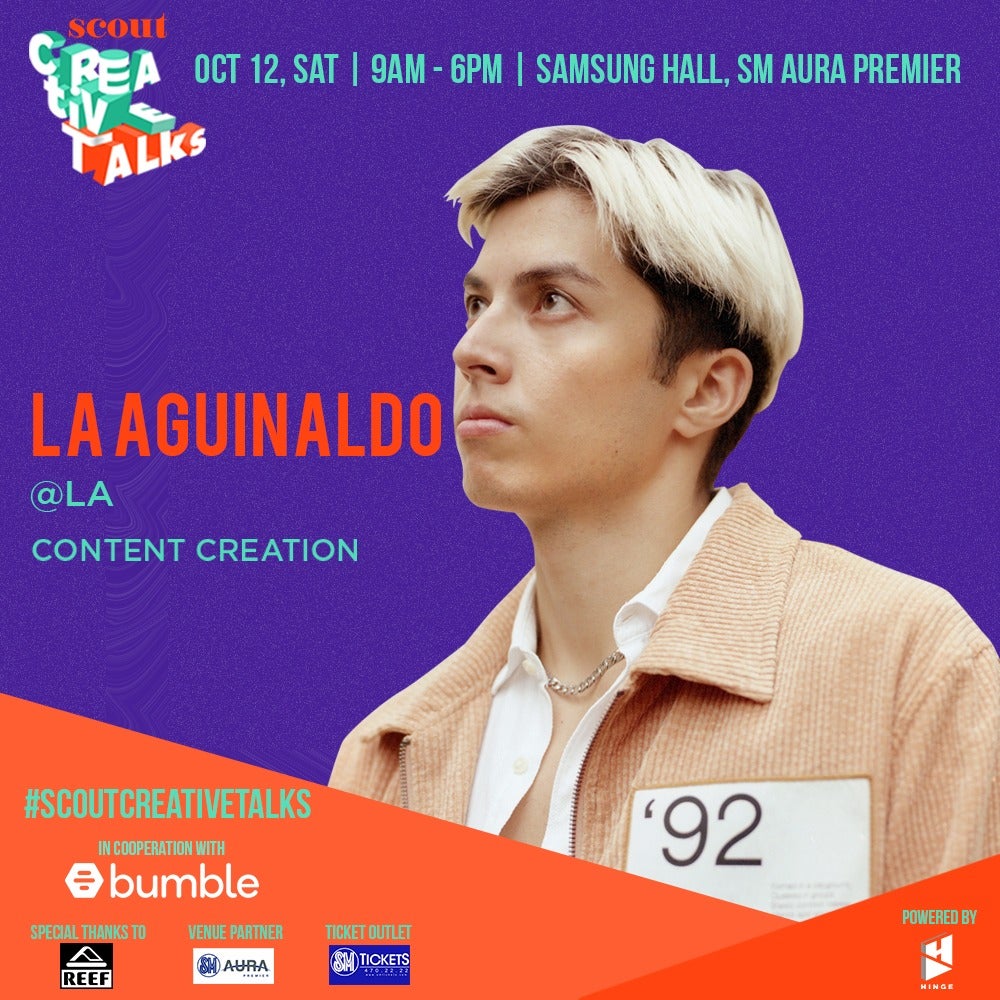 LA AGUINALDO is a rising YouTuber best known for his “LA All Day” video blogs. Through his YouTube channel, he connects with the millennial audience by producing content like exclusive interviews and travel vlogs. 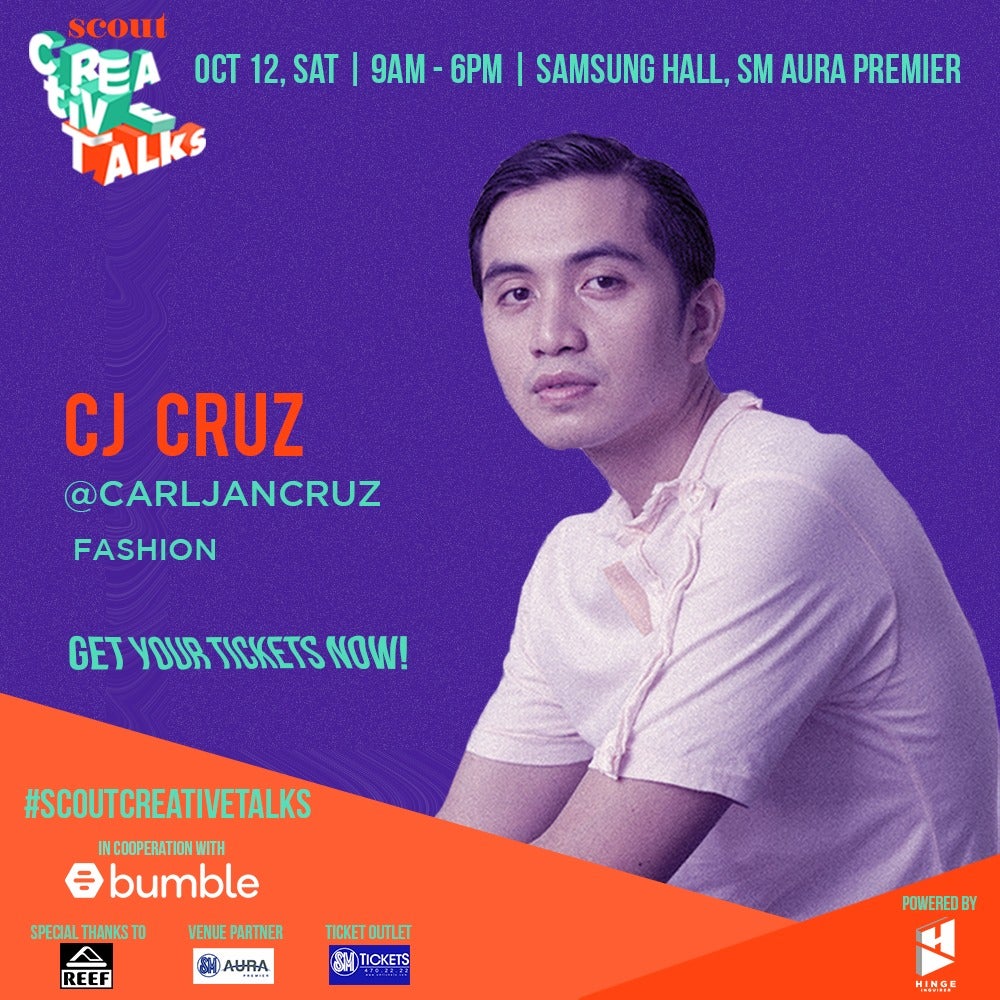 CJ CRUZ is a fashion designer who earned his degree in fashion design technology menswear in the London College of Fashion. He describes his brand, Carl Jan Cruz, as “his visual autobiography that aims to represent an honest dialogue between past, present and future.” Drawing heavily from Cruz’s Filipino roots, the collection is stocked at Manila’s Tropa Store, MNZ Store in New York, Esmeralda Serviced Department in Tokyo, and 100% Silk Shop in Toronto. 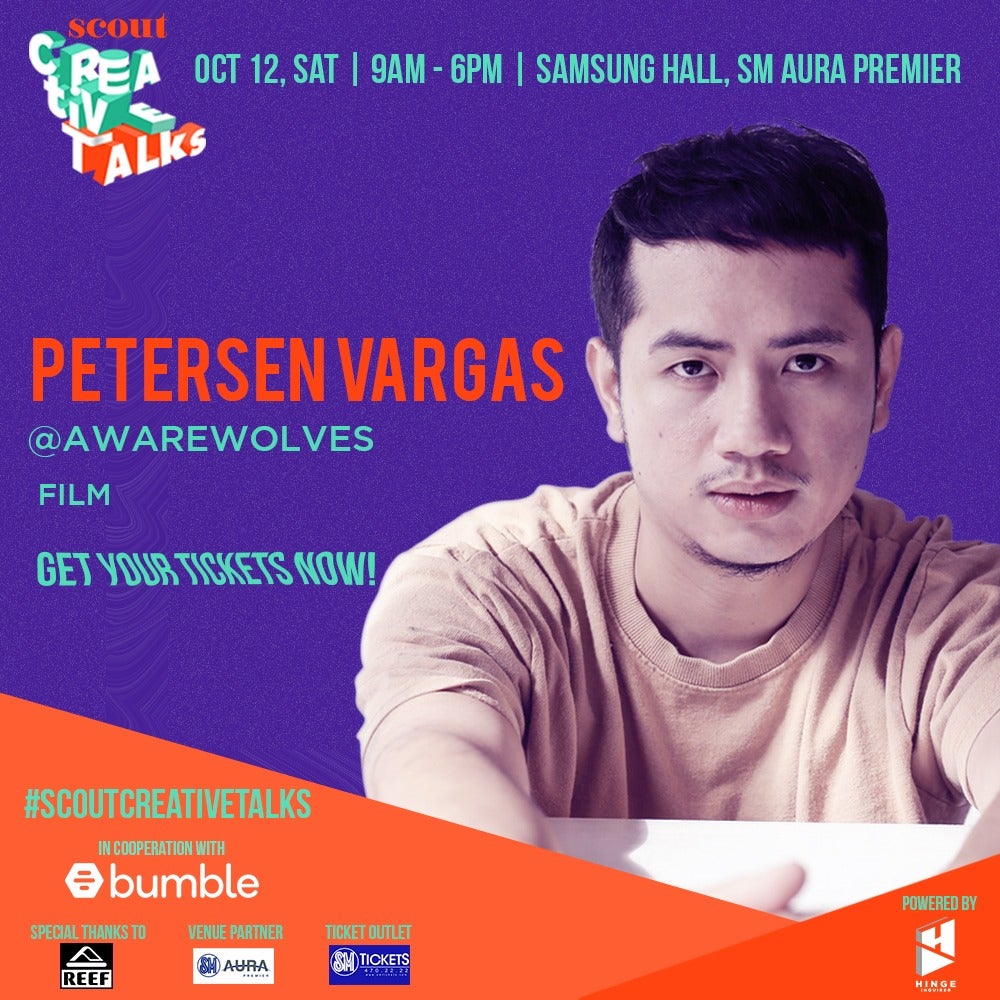 PETERSEN VARGAS is an award-winning filmmaker known for telling stories through a queer and regional lens. His works vary from short films, webseries, and full feature films, all of which have gained critical acclaim. Aside from being a filmmaker, Petersen is also the creative manager for an independent film studio, T-Rex Entertainment. 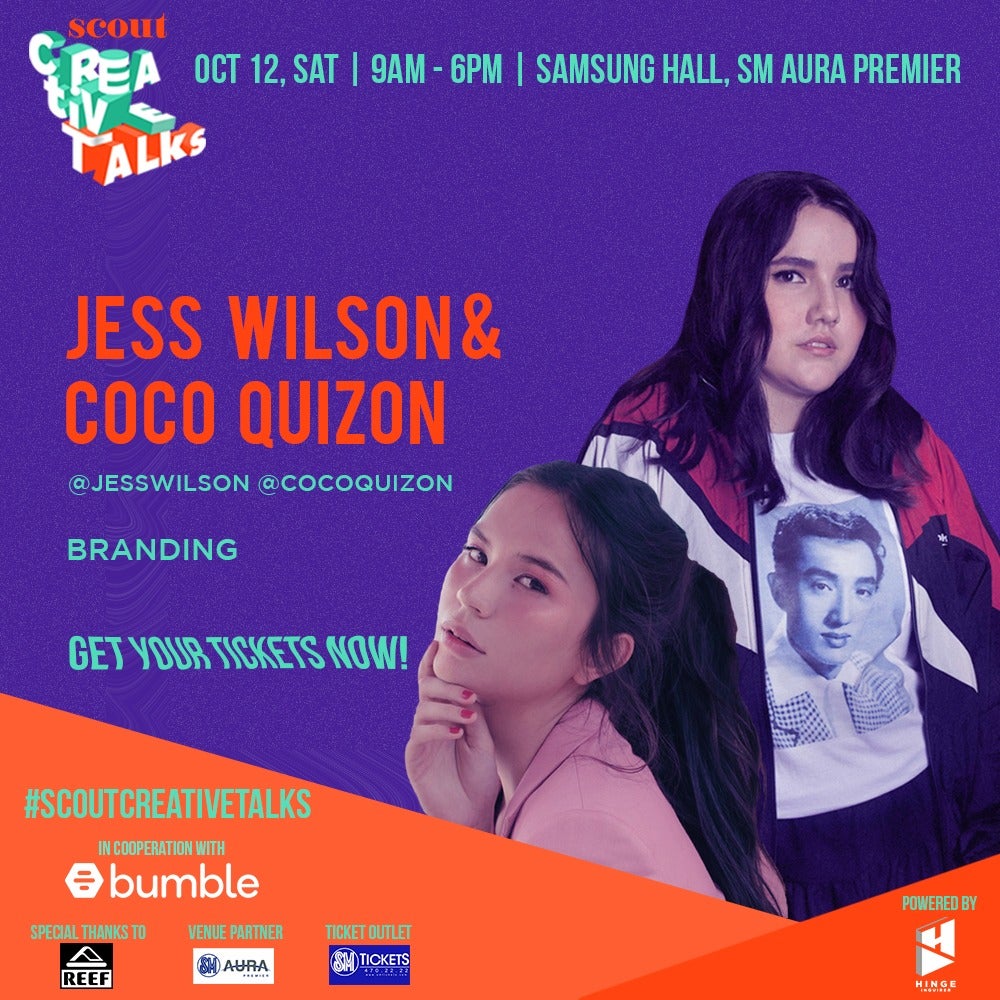 JESS WILSON is a co-founder of Sunnies Face, where she also works as the brand manager. Wilson has worked with brands like Harvey Nichols, L’Orèal, and Lancôme.

COCO QUIZON is Sunnies Specs’ brand manager. She’s also a co-founder of the digital marketing firm Get Social Digital, worked as an online strategy director for Bridges PR, and collaborated with the likes of Axe, Unilever, and San Miguel. 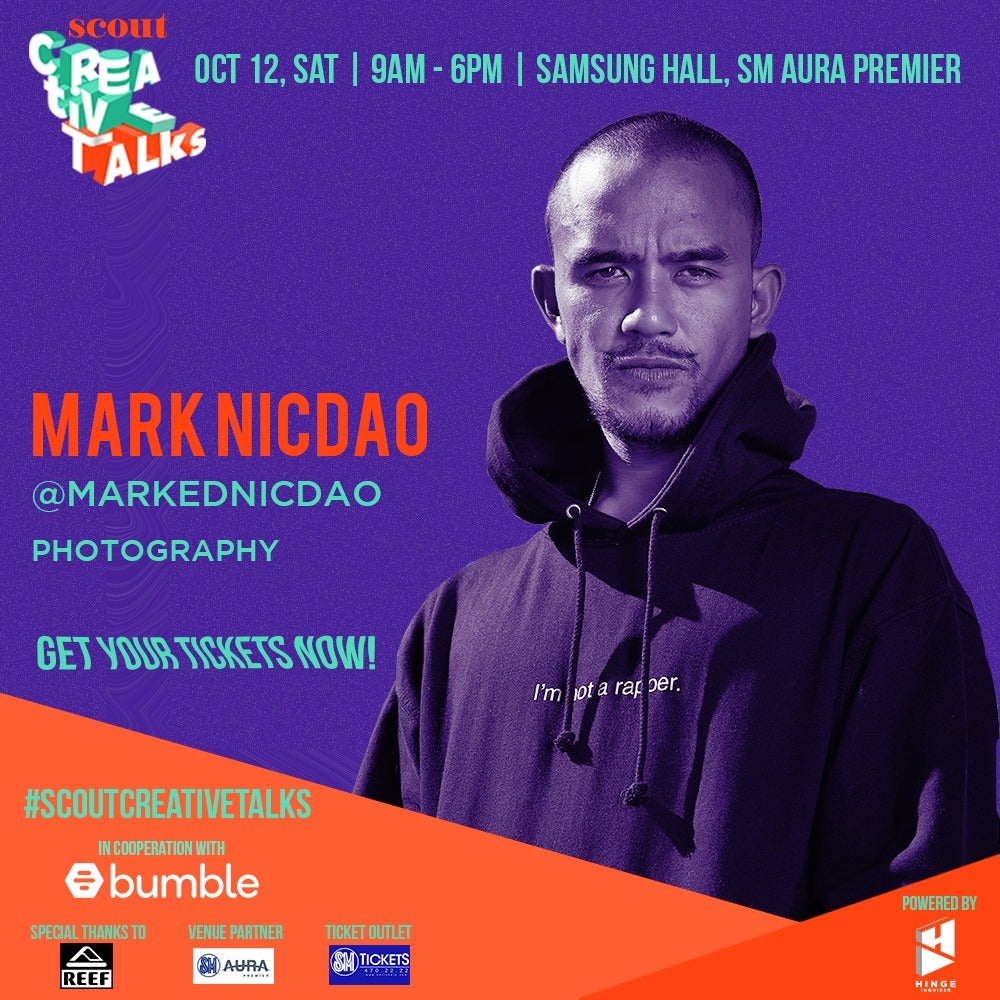 MARK NICDAO is a photographer who has built his reputation locally and internationally, with most of his works showcased on magazine covers and billboards. He has worked with local celebrities and international icons like Paris Hilton, Adam Levine, and Kylie Jenner.

Attendees of SCOUT Creative Talks will have the chance to ask the speakers everything they want to know to kickstart their career. Plus, everyone will receive a certificate and exclusive SCOUT merchandise! Get your tickets at https://bit.ly/2YLnXlR or visit any SM Ticket outlets nationwide. This event is produced in cooperation with Bumble. Powered by Hinge Inquirer Publications with special thanks to Reef and Jansport. /SCOUT