Unlike other countries, the Philippines only experiences two seasons: the wet season and the dry season.  The latter season lasts 2 months longer as compared to the former, therefore Filipinos are known to be more adept to the hot weather.

By the time the wet season comes, what keeps the Filipinos balanced for the weather?

Aside from the fleece blankets and the thick hoodie jackets, Filipinos also utilize the use of food to comfort themselves for the cold weather.

An example would be the famous Pork Sinigang, Arrozcaldo, Bulalo, Lomi, and a lot more to mention. However, as these recipes take time and effort to prepare, an alternative that Filipinos resort to are instant noodles.

According to a survey conducted by the World Instant Noodles Association (WINA), the Philippines ranked 7th among the countries with the most instant noodles consumption in the last five years.

Filipinos put a twist to this recipe by adding egg, dried vegetables, and chicharon to give the soup more flavor. In addition, Filipinos love indulging in instant noodles since it is very easy to prepare and quite affordable. They would just add the hot water, and add the seasonings after. And in two minutes, voilà, you’re served with delicious comfort food.

Some instant noodles even come in cups, so it also saves water and effort in washing the dishes. This is beneficial especially for Filipinos who often come home late from a long day of work. Moreover, it’s accessible—these goods are commonly available in groceries near you. And lastly, it’s cheap. Who wouldn’t love to fill in your appetite with noodles worth just 15 Pesos?

As mentioned earlier, Filipinos work long hours to earn money, and the arrival of this price-friendly meal to our culture aided vastly. Also, because the Philippines is known to be a disaster-prone country, the Filipinos would rather save their hard-earned money for future calamities.

With all the productivities of instant noodles, could there be other uses to this invention?

The answer is Yes.

A video of a man fixing a bathroom sink with the use of instant noodles was posted by a London based @riamichaelss on Twitter. The post was captioned “Okay I’ve really seen it all now.” The post made rounds on Twitter and has reached a total of 12.1 Million views, 218,631 likes and 69,189 retweets.

The video was originally posted in Douyin– the Chinese version of TikTok, both owned by the company ByteDance – and made by the user Xiubandrng.

In the video, Xiubandrng glues several blocks of instant noodles to fill the broken porcelain sink. He adds the seasoning as well and sands it down until the surface is smooth. Finally, he spray-paints the sanded part to white to unveil a perfectly repaired sink.

In his personal Douyin page, he makes use of the instant noodles to repair car dents, chairs, broken tiles, and, etc. 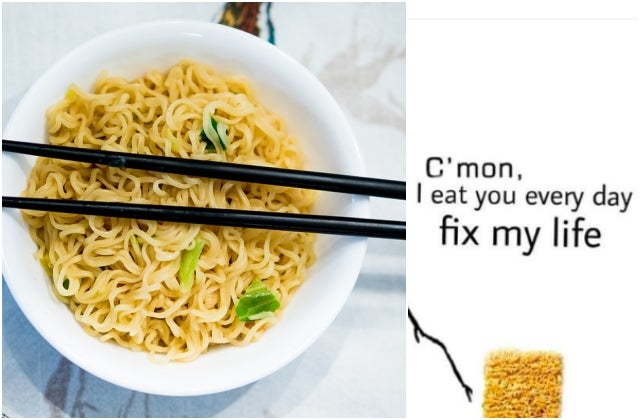 Instant noodles are made from wheat flour, water, salt, kansui, oil, starches, polyphosphates, and hydrocolloids. Every ingredient of instant noodles functions contains physical-chemical properties. The ingredients mentioned were all crucial to make it possible to construct cosmetic repairs in the videos.

A meme posted by a Facebook user Kyle Casilan included a picture of a sad character asking instant noodles to fix his life. The said post has reached about 8,100 reactions and about 1,100 comments. 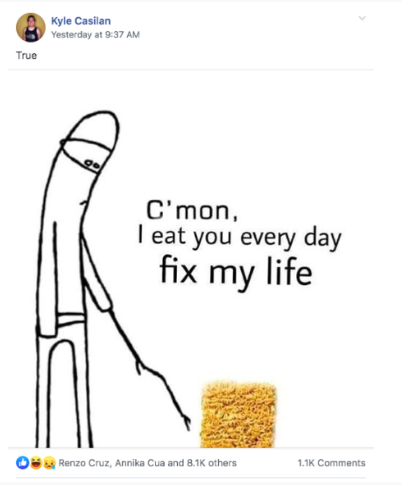 Another meme by private Instagram account @memezar about how he tried to use instant noodles to fix his grades was reposted by online user Inez Chong. The reshared post garnered about 11,000 reactions and about 1,800 comments on Facebook. 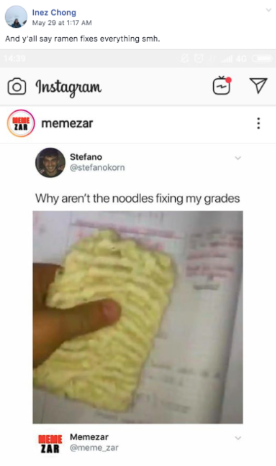 Whether you like it or not, using instant noodles as memes is a trend that will likely stay in the online world. So, tell us in the comments below, what do you think about instant noodles? TV/GL/FM