The official teaser trailer for Paramount Pictures’ Gemini Man has just been unveiled. Will Smith stars as Henry Brogan, an elite assassin in the epic action-thriller, directed by Academy Award-winning filmmaker Ang Lee.

Gemini Man is an innovative action-thriller starring Will Smith as Henry Brogan, an elite assassin, who is suddenly targeted and pursued by a mysterious young operative that seemingly can predict his every move. 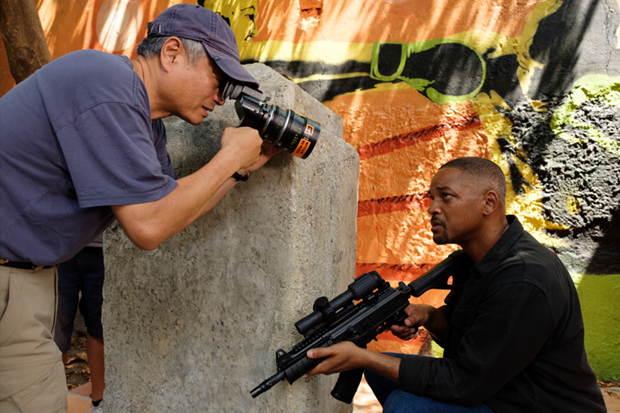 “This story is not one that could have been told with cinema as we know it,” shares Ang Lee. “However, thanks to incredible new digital technology, not only can we finally see both younger and older Will Smith embodied together on screen, but we can also experience the story in a deeply immersive way. It is my great fortune to be able to experiment and test the limits of what new digital cinema has to offer us. No less so to be able to work with two Will Smiths – One beautifully sophisticated, the other exuberantly honest. In my opinion, this is Will at his very best, and when the two come together, it is something truly magical. Further, the immense effort and technical skill of the crew in creating a new aesthetic, between the cinematography, art department, visual effects, and technical team, was both inspiring and heartwarming. I truly hope that this movie delivers a completely new theatrical cinematic experience to audiences across the world.”

“The emotional and physical challenges of making this film have been the most demanding of my career,” says Will Smith. “Ang is pushing the limits to give people an experience in the movie theater that you can’t get anywhere else. This is not only an action film, but an exploration of what one’s younger self can ultimately teach one’s older self. I’m 50-years-old now, and the irony of becoming 23-year-old Junior in this film is that 23-year-old me wouldn’t have been ready for this experience or to take on this role. Our hope is that this story provides something for everyone — never before seen cinematic wizardry, nuanced, relatable characters and next-level action.”

Check out the trailer below and watch Gemini Man in Philippine cinemas October 2019.