Last week’s event put Indians in a roller coaster ride of emotions as the Supreme Court finally struck down a colonial-era law which criminalized homosexuality. To celebrate the end of this “cultural war,” Nazariya — the LGBTQ-straight youth alliance — organized “Free Hugs for Humanity,” a campaign that would run across Delhi. 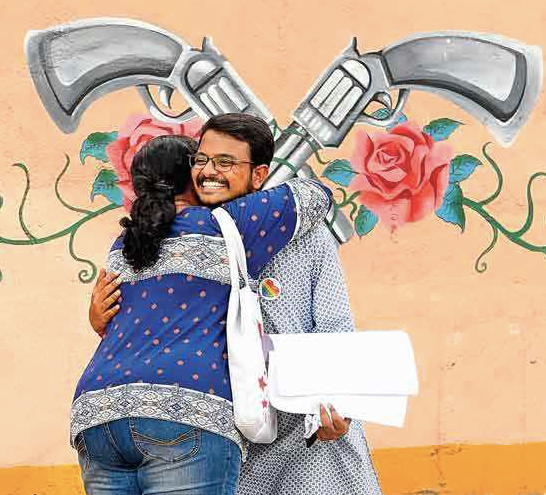 On Sunday, the group started with a mini-parade from Hudson Lane and Hauz Khas Village in Delhi. Supporters of the campaign marched and offered free hugs to strangers while carrying a slogan that read:

More than just giving free hugs, the main purpose of the said campaign is to sensitize people and assert their identity.

In an interview with Scroll, Nazariya co-founder Ruth Chawngthu shared that, “The only exposure to the queer community is based on stereotypical portrayals in Bollywood which is not only false but has lead to deep-seated stigmas. Creating visibility for our LGBT folks is the prime cause.”

Meanwhile, another gathering led by members of Mobbera Foundation, a non-profit based in Hyderabad, were seen with signs saying, “I am bisexual, will you hug me?” and “Love has no gender.”

Mobbera is Ruling the Media today after yesterday's successful spreading of love and acceptance through "Queer Hugs' at Love Hyderabad pic.twitter.com/8TMjI2hPkI

The decade of uncertainty has finally ended for the LGBTQ+ community in India, however, activist Vinay Borgamkar still believes that there are still people who are afraid to be around homosexuals.

“Many straight people think that hanging out with us will affect their sexuality,” said Borgamkar during an interview with Times of India.

Because of the positive reactions from strangers, the members of Mobbera Foundation confirmed that there will be more events like this to look forward to in the future. Members believed that this is there first major step towards gender sensitivity, as well as, societal equality.

Transgender woman shared how she was discriminated at MRT-3

A rainbow moment in India’s history: Homosexuality is no longer a ‘criminal offence‘