A rainbow moment in India’s history: Homosexuality is no longer a ‘criminal offence’

Thursday this week was indeed the biggest and most emotional day in India. The LGBT campaigners’ cry for gay rights had finally been heard after weeks of deliberations by the court and decades of uncertainty. India’s Supreme Court announced the landmark verdict in Delhi and unanimously struck down a colonial-era law known as Section 377 — which penalizes intercourse “against the law” and  categorizes gay sex as an “unnatural offence.”

The positive outcome instantly reached the people around India. Supporters who had been waiting outside iconic courthouse in Bangalore reveled while others broke down in tears upon hearing the court’s announcement. 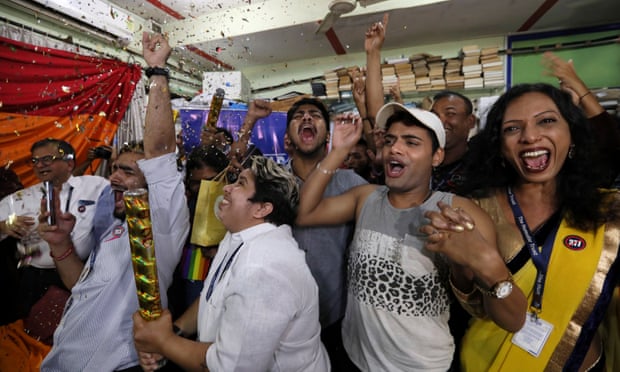 “I can’t even explain how I am feeling right now. The long battle has been won. Finally we have been recognized by this country,” said Bismaya Kumar Raula, while crying tears of joy.

Still overcome with emotion, campaigner Rituparna Borah shared, “It’s an emotional day for me. It’s a mix of feelings, it’s been a long fight. There was not enough media or society support earlier but we have it now. People will not be seen as criminals anymore.”

Regardless of the public opinion who was in favor to repeal the law, there remains strong opposition among religious groups especially in conservative rural communities. But the lawyers argued that gays should be provided equal rights and protections of the Indian Constitution.

In an interview with CNN, Danish Sheikh, a law professor at Jindal Global Law School and LGBT advocate said that a change in legislation will “create a space of freedom where you can start expecting justice.”