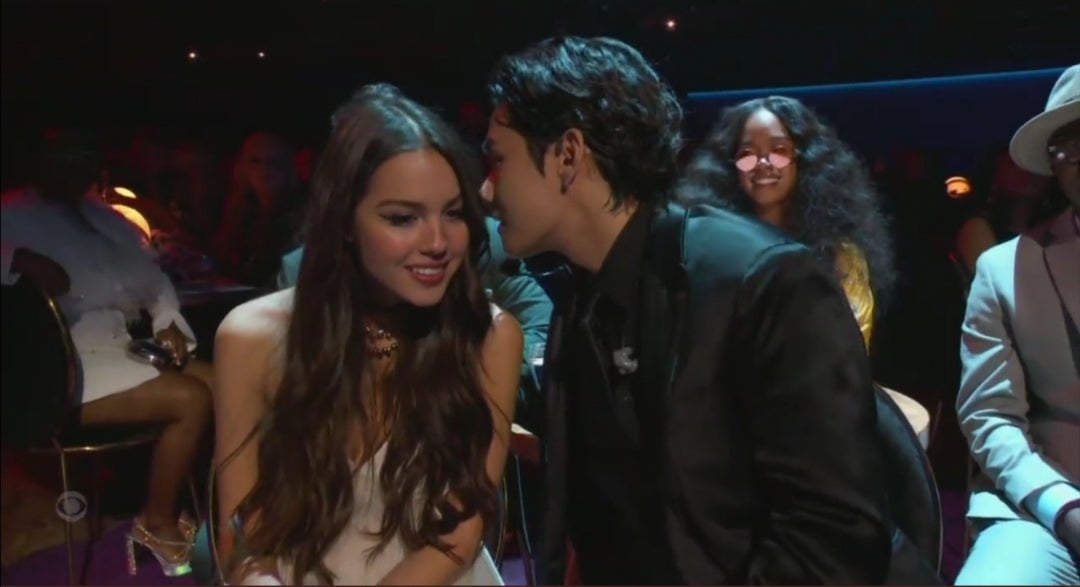 The 2022 Grammy Awards night was never short of great and epic moments. But there seems to be one moment that broke the internet: a cute interaction between BTS’ Kim Tae-hyung (popularly known as V), and Olivia Rodrigo.

In case you missed it: the boys of BTS channeled their inner James Bond during the performance of their hit single, ‘Butter’, at the 2022 Grammys. The group delivered a heist-themed performance with Jungkook descending from the roof and the remaining six members—Suga, RM, J-hope, Jin, Jimin, and V—sitting in the crowd.

Their performance kicked off with V sitting beside the “SOUR” singer where the two shared a flirty interaction.

In the video, V can be seen leaning toward Rodrigo, who’s been smiling, and whispering in her ear. Shortly after, Rodrigo gasped, and V showed her a card. The Korean pop star then pointed to the stage, signaling the beginning of the group’s performance.

Of course, the pair’s skit didn’t go unnoticed. It went viral, sending their fans into overdrive.

I thought JEON JUNGKOOK was the INTERNATIONAL PLAYBOY it was actually KIM TAEHYUNG??? pic.twitter.com/BIhFPpEZSh

me after seeing taehyung flirting with Olivia:

everywhere I go, I keep seeing this olivia and kim taehyung scene and I–😭#GRAMMYs pic.twitter.com/fCZyp44bWu

me when olivia rodrigo brings up the moment she had with taehyung pic.twitter.com/XNAHlRdILQ

it's so💔💔💔💔💔 but ok
WTF TAEHYUNG
WHAT JUST HAPPENED pic.twitter.com/RJ8jTjuUkn

Many fans also expressed how Rodrigo managed to stay calm during the whole interaction, while others wanted to be in the Disney star’s place.

How did Olivia not freak out because if Taehyung looked at me like that I would have fianted right away pic.twitter.com/zfN23fWyV2

I’m still processing this Kim Taehyung x Olivia Rodrigo’s moment. Taehyung is so hot and I wish I was her. #GRAMMYs

Taehyung and Olivia But you remermber Olivia
is half blooded Filipina pic.twitter.com/Y767wXCSx8

Fans also made references to Rodrigo’s songs, “traitor” and “jealousy, jealousy.” TBH, we’re probably going to listen to those songs too as we cure our broken hearts.

Never thought that the line "You betrayed me" from Olivia's song Traitor, will ever be relatable than this.#GRAMMYs #BTSARMY #BTSGrammy pic.twitter.com/2DmHI4gJag

currently listening to jealousy and traitor by olivia rodrigo pic.twitter.com/7hnHcCoLTq

Olivia won the grammys already with this 😭😭😭 pic.twitter.com/eygxBlkvX7

On the other hand, some were also curious as to what V had just whispered to the Grammy Award-winning singer’s ear.

“you better help namjoon hyung get a driver’s license” pic.twitter.com/wugEDl1PAt

I NEED TO KNOW WHAT KIM TAEHYUNG SAID TO OLIVIA #TAEHYUNG #BTSARMY pic.twitter.com/E3of5wTE0I

BTS was nominated for Best Pop Duo/Group Performance for “Butter.” However, the award went to “Kiss Me More” by Doja Cat and SZA.

Olivia Rodrigo is Billboard’s 2022 Woman of the Year

WATCH: Take personal care of your BTS bias via the TinyTAN Tamagotchi line 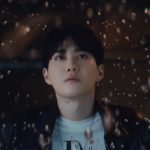 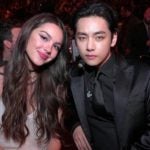