No Way Home (NWH) has finally arrived at Philippine cinemas on January 8, and Filipino marvel fans are as excited as they’ve ever been. Tickets for the premiere were sold out, especially since theaters can now only hold 30% capacity due to the Omicron variant. Luckily for us at POP!, we were able to get hold of a slot for an advanced screening last January 5, and we were one of the select publications who got a first look at Spider-Man: No Way Home in a Philippine cinema. This review of Marvel’s latest blockbuster is spoiler-free.

Marvel has done it again: They’ve created another blockbuster movie that everyone is loving. The third installment to the Spider-Man trilogy in the Marvel Cinematic Universe has already grossed over 1 billion dollars (Php 51 billion) across the world since most countries released the movie in cinemas last December. Clearly, despite the ongoing Covid crisis, people are still going out of their way to watch NWH in cinemas. Critics are loving the movie too – it has an incredible 94% critic rating on Rotten Tomatoes. Let’s go over the movie’s positives and see why people love this movie so much (spoiler free, of course).

For No Way Home’s story, there’s a lot that I can’t say due to spoilers, but what I can mention is the very different tone I felt when watching the movie. It was much more serious, emotional, and heavy compared to the first two movies for Tom Holland’s Spider-Man (Homecoming and Far From Home). Many know that it felt like there weren’t much stakes in these first two movies, especially those who thought that Tom Holland’s Spider-Man was just an heir to Iron Man – an Iron Man Jr. of sorts.

I’m not saying the lightheartedness those two movies had was a bad thing. In fact, Homecoming and Far From Home actually fit well in the context of the MCU. It’s just that many Spider-Man fans wanted more. Others even felt that Tom Holland’s Spider-Man didn’t feel like a true Spider-Man at all. This movie fixes that, by truly embedding the classic Spider-Man motto into the audience’s hearts: “With great power, comes great responsibility.” It does so in a way that no other MCU Spider-Man movie has. 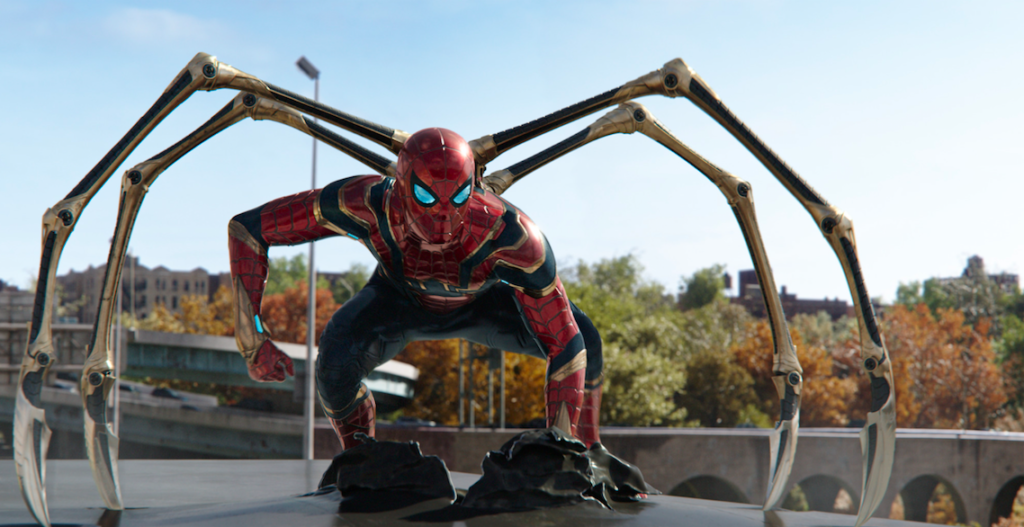 There are a few unclear elements in the story though – a few plotholes here and there. The script also has those typical MCU jokes that sometimes fall flat. These are just minor issues compared to the movie’s amazing and convincing storywriting.

In terms of the performances by actors, Tom Holland does his job well being the actor for Spider-Man. This movie showcases more of the emotional side to his Peter Parker, and he nails it. There’s nothing much more to say about his performance, other than he is a very convincing Spider-Man and Peter Parker – this movie and its script further amplifies his acting.

Alfred Molina, William Dafoe, and Jamie Foxx all comeback as Doc Ock, The Goblin, and Electro – classic Spidey villains from different Spidey movie franchises. Molina never misses a step as Doc Ock, and the de-aging CGI certainly helped out his look. Jamie Foxx switches up his performance as Electro, and it works wonders in the context of the story. However, William Dafoe steals the show as the Goblin. The way he contorts his face to look like a demonic figure still amazes me the same way it surprised me in the Sam Raimi Spider-Man trilogy.

We move on to the movie’s visuals. This movie was very much CGI-heavy, like most Marvel films. It was used well enough to not look glaringly obvious, although at some points it did seem like too much CGI was used. It’s not bad enough to distract from the story though. As for the cinematography, Director Jon Watts is not exactly known for his camerawork, but it was straightforward enough to work well for the overall story of the movie.

Overall, this movie is everything you’d want in a Spider-Man movie. High stakes, a troubled superhero, and a story that really hones in on the famous quote, “With great power, comes great responsibility.” There is so much more about this that I can’t bare to keep mum about, but those would be major spoilers. All I can say about those spoilers is this: Prepare to get your minds blown. You will not be disappointed.