After almost a month since her death, Cinematographer Halyna Hutchins’ was laid to rest last November 20. Her husband, Matthew Hutchins, revealed the addition of “ASC” to the name of Halyna on her grave marker to indicate her work with The American Society of Cinematographers.

With the quote “Her light shapes our lives. Keep chasing your vision.”, her grave marker also sports simple images of a camera and film to emphasize her love of filming and cinema.

It’s been more than a month since the tragic accident that occurred in Santa Fe, New Mexico. The accidental shooting happened last October 21 while star and producer of the film, Alec Baldwin, was practicing his draw with a gun that was declared “cold” or containing no live ammunition. 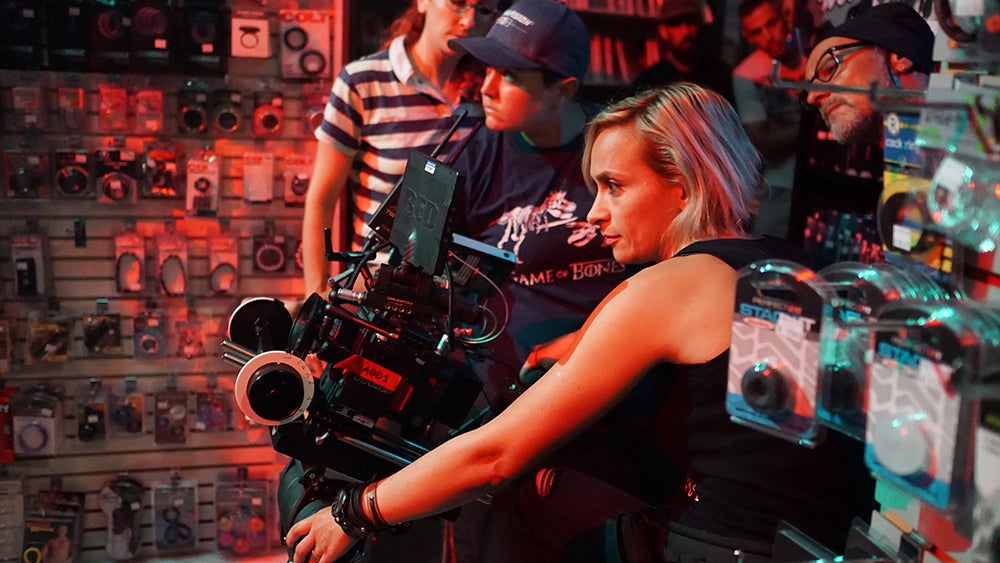 While we do know that it was in fact a live bullet which wounded film director Joel Souza and killed cinematographer Halyna Hutchins, there is still much shrouded in mystery. There are many things to consider such as tensions on set due to prior misfires, questions on safety, rushed production, and crew members’ claims on unfair treatment—which eventually led to some of them walking out of set prior to the tragic event.

The main questions remain to be unanswered: why was there even live ammunition on set? How was the gun handed to Baldwin with the live rounds undetected? Why was the gun fired? And who is truly to be held responsible for its dreadful outcome?

Since October, the situation has primarily been one of finger pointing and dodging of the blame. The blame has been passed from assistant director David Hall who declared “cold gun” on set, to the head armorer Hanna Gutierrez-Reed whose experience and professionalism have been questioned, and now finally landing on the lap of Alec Baldwin himself.

Script supervisor Mamie Mitchell files a lawsuit which states that “There was nothing in the script about the gun being discharged by DEFENDANT BALDWIN or by any other person.” The suit continues to say that Baldwin should not have relied on the word of others that the gun was cold without having checked it himself.

Baldwin has since hired the services of Aaron S. Dyer who was the former Assistant US Attorney and has represented people like Girls Gone Wild creator Joe Francis and astronaut Buzz Aldrin.

Mitchell was the person that called 911 after the shooting occurred, in the released recording of the call she is also heard calling out AD Halls as the person who should be held accountable. Stating that “He’s supposed to check the guns. He’s responsible for what happened.”

Though before Mitchell’s lawsuit was filed, Halls has advised that “he should have checked all of them but didn’t.” Halls’ attorney, Lisa Torraco, later stated that the duty of checking the firearm is “not the assistant director’s job” and that if he did do this it was because he wanted to ensure everyone’s safety and not because it was his responsibility on set.

Mitchell’s lawsuit also names Gutierrez-Reed as one of the co-defendants of the case. The young armorer’s qualification to be designated as head armorer on set has been questioned by most. Prior to Mitchell’s suit, Gaffer Serge Svetnoy, filed a complaint on the grounds of general negligence in the production’s environment.

According to his attorney, Gary Dornick, “My client is a lighting specialist and didn’t pay close attention to the armorers throughout the production, but he couldn’t not notice what was happening.”

Svetnoy has been recorded as the person who held Hutchins after she was wounded. He posted on his Facebook that the situation is “the fault of negligence and unprofessionalism.”

My vision of the RUST tragedyI have received hundreds of calls, text messages, letters with words of support and…

In his post, he stresses the importance of hiring competent and professional employees, exclaiming that it may cost more to hire them but what you are paying for is “peace of mind for yourself and the people around you,” he goes on to say that “No saved penny is worth the LIFE of the person!”

According to her attorney Jason Bowles, Gutierrez-Reed was “hired on two positions on this film, which made it extremely difficult to focus on her job as an armorer.” He expressed that “she fought for training, days to maintain weapons, and proper time to prepare for gunfire but ultimately was overruled by production and her department,” he goes on to say that “the whole production set became unsafe due to various factors, including lack of safety meetings. This was not the fault of Hannah.”

Hutchins’ family themselves have not filed any lawsuits so far. According to the family’s attorney, Brian Panish, the family is still in mourning—considering the recent interment of Hutchins’ ashes. They are also in no rush to file a lawsuit as they patiently await the results of their “intensive investigation of the facts.”

In light of what has happened and the catastrophic outcome, conversations are being established about gun regulations in present and future productions. These discussions may hopefully to prevent any further tragedies due to human error in handling firearms in the future.

As Serge Svetnoy said, no saved penny is worth a person’s life. This may serve as a monumental word of caution to future producers and filmmakers. Complacency kills.

Safety procedures are there for a reason and should not be brushed past due to “tight” timelines. Time must be carved out for these things.

It’s not a bad idea to invest in fresh blood when hiring crew members but it may still be worth considering hiring a more seasoned veteran to help them out as well, as compared to hiring a bunch of newbies simply to minimize cost. Again, as Svetnoy said, what you are paying for is the peace of mind that the work will get done safely and the output will be of high quality as well.

While people from within and outside of the Rust production have expressed their sympathies and condolences, it may be a bit more consoling to the family of Hutchins if decisive actions were taken. If a person, or even a group of people, were to take responsibility for what happened.

It may be tricky to simply boil things down to “accidents happen” because this tragedy was the result of reckless negligence that occurred due to the actions of more than one party.