Crisis is often the catalyst for keeping a journal or documenting a lifeline. Writing feelings and experiences in a notebook mirrors our humdrum activities and how daily memories work, shifting back and forth between past, present, and ideals for the future. Our writings flow together with our attempt to link these encounters with meaning, no matter how dark and how emotional. Come to think of it, most of us has that one notebook where we scribbled our then seemingly nonsense dreams, or statements that cry out for help when we were down, and even just something where we penned our daily activities. That kuwaderno, notebook or journal, was the testimony of our lives.

That is what the critically acclaimed Filipino band Ben&Ben’s latest album is all about. Billed as Pebble House, Volume 1: Kuwaderno, it was launched over the weekend via Sony Music. This highly anticipated sophomore album expands the band’s sound with rewarding experiments and thematically bolder songwriting. The 13-track album marks an important chapter in Ben&Ben’s history as it captures the songs, stories, messages, experiences, learnings, and insights that accompanied them through their self-reflecting but fulfilling journey. 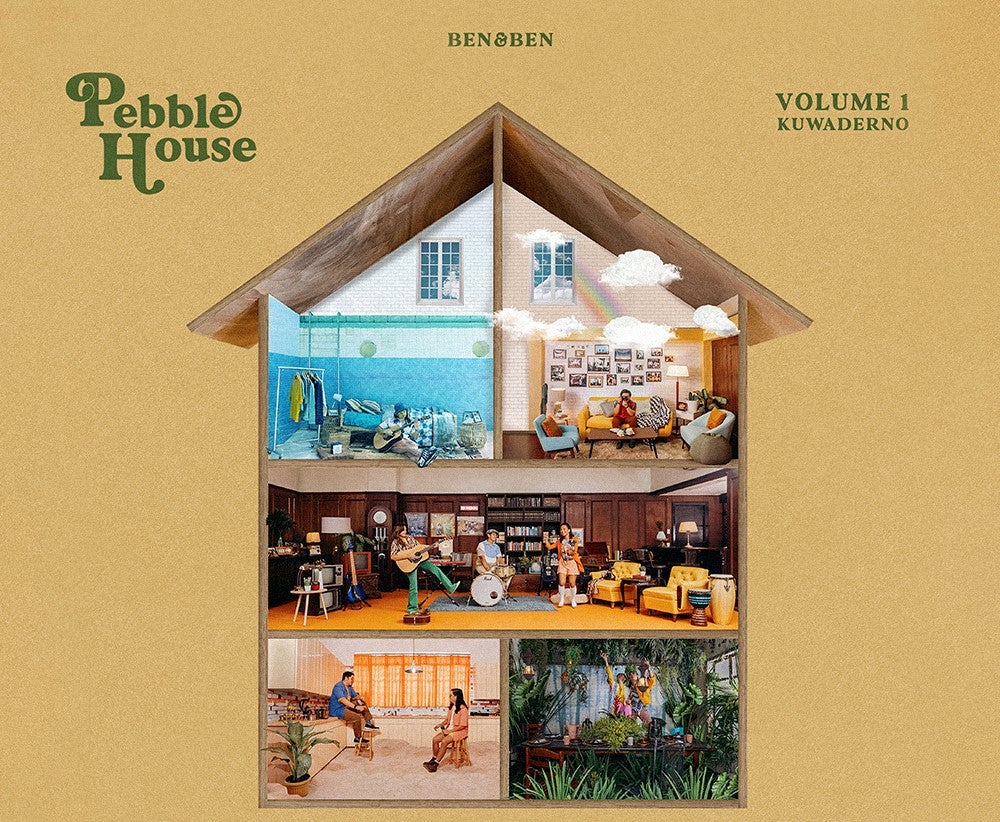 “Each song, much like an entry in one’s personal journal, encapsulates something uniquely special to represent something in a certain point in time,” the nine-piece collective shares in a statement. “We felt it would be important for our second album to be a work that brings us closer to our listeners and introduces them more to the wide spectrum of what we are capable of and of who we are as people.” 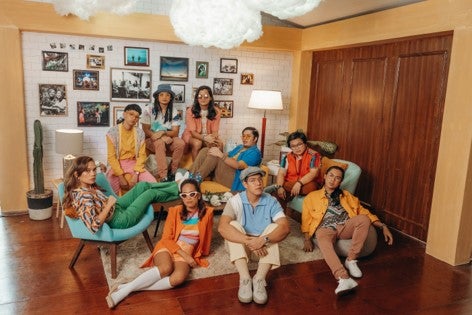 Ben&Ben, a multi-platinum certified indie folk/folk pop band in the Philippines, consist of brothers Paolo and Miguel Guico on acoustic guitars and vocals, Poch Barreto on electric guitar, Jam Villanueva on drums, Agnes Reoma on bass, Patricia Lasaten on keyboards, Toni Muñoz and Andrew de Pano on percussions, and Keifer Cabugao on fiddle. Ben&Ben’s Pebble House, Vol. 1: Kuwaderno exceeds all expectations in terms of musicality and production, a natural evolution from their similarly fascinating debut album, Limasawa Street and yields a delightful anthology that will take every listener to a sneak peek of how, where, and what they are in this seemingly dark and unfamiliar times.

Roslyn Pineda, Sony Music’s General Manager, Philippines and Vice President, Business Development, described the album as “incredible, exceptional, outstanding body of work; so deep in meaning and at time, so joyous”. According to Pineda, it was about two years ago when the band released their debut album Limasawa Street, which is now approaching four times platinum. “Last year we were all ready to fly to the US for what was to be Ben&Ben’s big debut on the world stage. International music bigwigs were set to be blown away by the electrifying live performance of this talented 9-piece from the Philippines. Alas, it was not meant to be,” she shared. Thus, they had to figure out how to make music while apart. “Until I got a call from Paolo announcing that the band was moving in together. Without that visionary decision we would not have this sophomore album,” she added.

With their second album, Ben&Ben has teamed up with the biggest names in the Philippine music industry on six of the songs, including “Swimming Pool” (Feat. Chito Miranda of Parokya Ni Edgar) which talks about the present realities; “Pasalubong” (their second collaboration with Moira Dela Torre); “Lunod” (Feat. Zild and juan karlos), which conveys emotions when one is lost in thoughts and things that makes one unable to breathe; and “Sugat” (Feat. Munimuni), a soothing reminder that despite all the pain that needs healing, we are not defined by our past.

More stand-out collaborations are “Sabel” (Feat. KZ Tandingan), an almost a capella song with subtle hints of body percussions, showcases the power and strength of a woman. Lead vocalist and guitarist Paolo Benjamin revealed that they deliberately limited instrumentation for this track because they wanted the body percussions to create enough space for the message to come through. Another significant song is the socially appropriate “Kapangyarihan” (Feat. SB19). With lines that go: “Huwag niyong tapakan ang katarungan. Akala nyo ba ang kapangyarihan ay sa inyo? Sino ba kayo? Magwawagi ang katotohanan, ang kadiliman ay ibabagsak. Nagsisilbi ka dapat” (Don’t dare step on justice. Did you think that power is yours? Who do you think you are? The truth always wins, the darkness will not prevail. You should serve the people.)—the band wants everyone to realize about what we should do when given the power.

Paolo expressed how they’ve always wanted to collaborate with these artists, but they were also always a bit too shy to ask. “When working on the second album however, our songs and the arrangements gave us confidence to reach out in hopes that these collaborators would likewise believe in our music enough to work with us. Thankfully, they did, and we are immensely grateful for their generosity in sharing their hard work and talent with us,” he said.

Equally captivating songs include “Kasayaw”, a playful exploring and discovery of their lives pre-pandemic, and how they are embracing life now as they have moved in together; the 90s new wave feel “Elyu” (a popular term for La Union, an ideal getaway for wave warriors and those who have always loved the always-summer beach vibe) is also in collaboration with the Manila String Machine; while “Magpahinga” highlights everyone’s desire during this pandemic. “We have been so much during this pandemic but why do we feel we don’t deserve to rest? We do,” Ben&Ben stated.

“Ilang Tulog na Lang” talks about the realities of LDRs—how couples get relationships to thrive even when apart—has a standard-jazzy hint and was executed with a distinctive barbershop quartet vibe. “Kayumanggi”, on the other hand, is a love song to our identity as a Filipino, and about embracing our skin. With “Upuan”, Ben&Ben released a music video—featuring He’s Into Her stars Donny Pangilinan and Belle Mariano (DonBelle)—via their official YouTube channel. Directed by Niq Ablao, mixed by Jean Paul Verona, mastered by Leon Zervos, and written, arranged, and produced by Miguel and Paolo Benjamin, Upuan’s the lyrics and visuals take us into the joy and jitters about asking someone out to a prom and as the band said: “What is meant to happen, is meant to happen”.

Raw honesty in one album

The band feels that they have put their best foot forward in their first album and Pebble House Volume 1: Kuwaderno, they revealed, is rooted in honestly and more heart, and about how they essentially see the world during this particularly difficult time. This all-Filipino compilation (incidentally released in August, also celebrated as the “Buwan ng Wika”) screams of themes that are with so much weight and depth that illustrates who Ben&Ben is, as the band, and as different individuals who could feel different emotions, all at the same time.

Pebble House, Volume 1: Kuwaderno‘s pre-production began in April when the band recorded “Upuan” and “Magpahinga.”, their first two songs. With the collaborations they did, Ben&Ben admitted they had slight hesitation with producing songs with other outstanding artists, especially about how they could make it work. As the album progressed, the group realized that they had a lot to learn about all Filipino music artists. Now, they view their collabs as meaningful exchanges of musical souls. The more they did it, the more they understood and respected the identity of all Filipino music creators who have unique and distinct sounds different from theirs yet can complement and magically jive.

“There has been a lot of growth that has happened both for the band and our individual lives. Limasawa Street depicts the kind of people we were then while Pebble House are the people we are at the moment,” the group said. The album, aptly called Pebble House, came from the name of the street where they live now that they have decided to move together. But as Paolo puts it: “Pebbles are symbols of little things. Each piece is a part of building something big. And that’s how we are living and creating now…one pebble at a time”.

“A lot has happened in the last two years. All of our lives as individuals, as families, and as countries have been affected by the pandemic but in the midst of all these, there were 9 individuals who decided to soldier on and make music for the rest of us and take us out of our funk. It is safe to say we’ve never needed Ben&Ben’s music as much as we do, especially during these trying times. Pebble House Volume 1: Kuwaderno makes everything worth it,” Pineda concluded.

Yes, most of us have that one notebook which is a testimony of the kind of person we were, our juvenile experiences, and how we perceived life then. Pebble House Volume 1: Kuwaderno is that journal or notebook that we have laughed and cried with, and that which we have kept hidden somewhere in our cramped dark closets. That notebook is coming back to us now, with songs that we could find growth from, singing to us and our present-day beliefs, victories, and healing and providing the real texture and the fitting soundtrack of our daily lives. 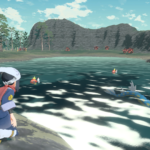 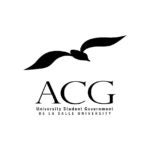