Another month has come and gone, and wading into the month of May, you may (pun not intended) still be getting notifications from one post in particular.

You know which one, the post that was plastered all over Facebook during the latter half of April. The one that starts with a seemingly ominous message “If you’re reading this…” but is actually meant to spread happiness and positivity. Yeah, you know what I’m talking about:

It seems that almost everybody hopped on to #SpreadTheHappiness during the final days of April.

The earliest mention of this “movement” (that could be found) was actually a tweet from American singer, Raveena Aurora (@raveena_aurora), she also gives credit to the mastermind behind the concept, photographer Quil Lemons (@QUILLEMONS). What’s interesting about this whole thing is that she actually posted this “challenge” almost two years ago on December 28, 2019.

thx @QUILLEMONS for this idea 🙂

Almost two years later, the world as we knew it to be in 2019 seems almost like science fiction. Since the above tweet was posted, volcanoes have erupted, people have been murdered, and the infamous COVID-19 pushed the world into a prison of illness, face masks, and “the new normal.”

It seems like there could not have been a more perfect time to resurrect this prompt… and resurrected it was! Adding “Life is hard, especially during times like this…” to Raveena’s original post, numerous personal and even public accounts decided to challenge other people (and themselves) to remember all the fond memories that they have had with others.

The prompt created a sentimental and nostalgic environment within Facebook, encouraging people to reconnect with those they may have lost touch with, giving (even single) people a reason to smile at their phone screens whenever they light up. 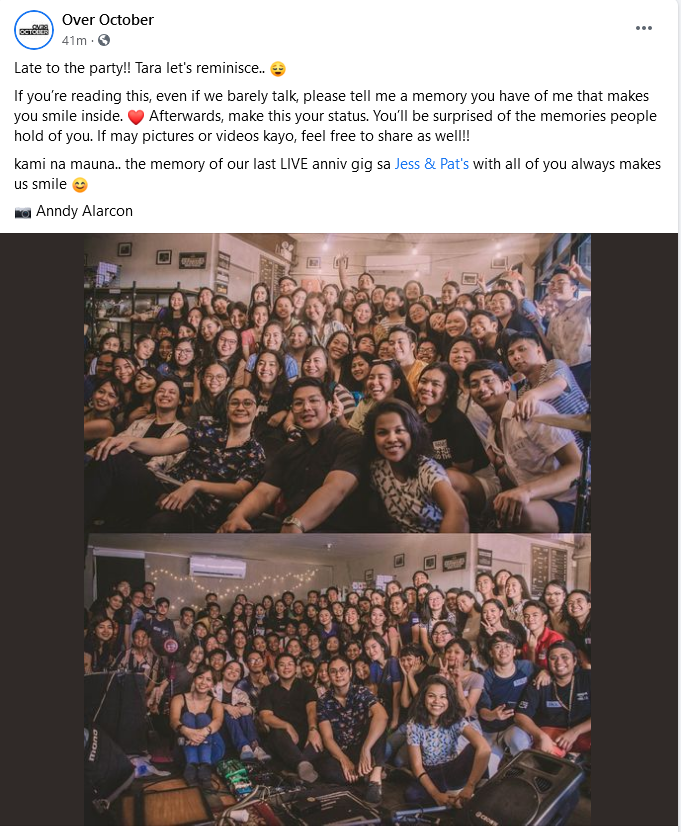 One like, comment, and share on a Facebook post would lead to another and another — creating great traction and visibility for the movement. For a while, logging onto the platform would mean scrolling through a newsfeed containing vignette after vignette of a person’s life along with the big (and small) moments that they shared with others.

A small ball of light was being passed on from person to person with every memory that induced even the slightest of smiles, or possibly even an amused exhale.

With most things that become popular in this day and age, this prompt was also utilized by some as a new type of meme. Creating jokes based on the format of the prompt, giving people even more reasons to smile. 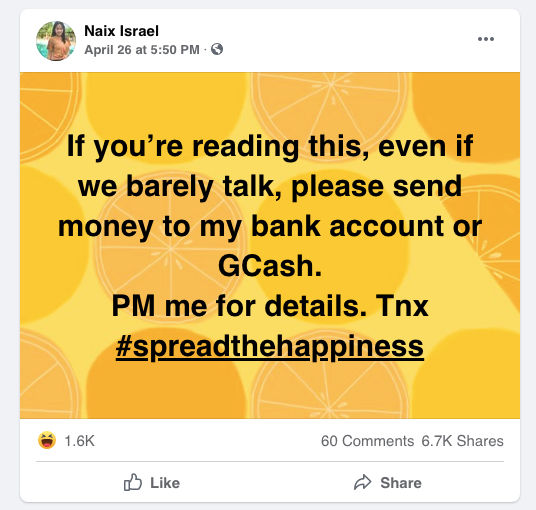 The end of April was filled with so much wholesome goodness — at least within certain spheres of Facebook — providing people with some respite from the cumbersome challenges we face today.

Some people have not seen their loved ones in months, possibly even coming up to a year, but sometimes remembering moments shared with them (and even being reminded of instances we might have forgotten) can make them feel like they are right by our side, and with the help of the internet (and positive Facebook posts such as these) we now know that they truly are.

So with the new month beginning, let’s not forget to continue to #SpreadTheHappiness and keep the ball rolling.