The rise and ‘fall’ of Kris Aquino

It’s a known Filipino trait, albeit bad, to laugh at everyone’s blunders. And when celebrities get involved in stage disasters, audience have a good laugh. But artists are humans, too. They make mistakes, but unfortunately for others, these blunders have literally put them in the spotlight.

Queen of all media Kris Aquino started her movie career three decades ago, with her debut film, Pido Dida: Sabay Tayo (Pido Dida: Let’s Do it Together), a mainstream romantic comedy which she starred alongside the late funnyman Rene Requiestas in October 1990. Aquino was only 19 and a freshman at a Jesuit university. With all the excitement to promote her first movie, the start of a promising career and having your mother Corazon Aquino, as the then President of the country, everything seemed to perfectly fall into place. So, what could possibly go wrong? The actress fell—not off, not out of, but—through the stage.

The fall was so bad that those who have seen it still remembers it to this day. And if you’re one of them, I guess that means only one thing: you’re old. Video clips of the famous fall have started resurfacing online, starting 2016 when a famous radio DJ and podcast host posted it on his Instagram (with caption: I would still be hurting if something like this happened to me” followed by hashtags #krisaquino and #throwback); people started getting curious. The one-minute video link has already registered 1M views on Facebook.

The accident was seen live on national TV during the height of the now defunct noontime Sunday variety show called “GMA Supershow” hosted by German Moreno, a known star maker (who also goes by the nickname “Kuya Germs”). That unfortunate Sunday when Aquino’s mishap happened was also Kuya Germs’ special birthday celebration thus instead of the usual venue, the broadcast was staged at the Araneta Coliseum with a throng of live audience and thousands of viewers watching from their own homes.

As co-hosts Mariz Ricketts and Maricel Laxa introduced the Pido Dida duo, Aquino and Requiestas entered the stage to sing the movie’s soundtrack, Aquino missed the real stair steps, walked through and stumbled into a makeshift area, by the side of the stage, which was obviously constructed out of thin fabric. One minute, Aquino was energetically waving to all screaming fans; the next minute, she was gone from sight.

She fell through it, hitting her nape first, and the rest of her body next. Requiestas immediately sprung to help get the artist out with the help of the production team, as the movie theme song continued to play in the background, the lyrics of which, go: “Isang mahirap at isang mayaman, ngunit tunay na magkaibigan. Pido Dida, mga problema lagi nating nalulusutan” (One is poor and the other one is rich, but they are true friends. Pido Dida, we can survive any problem). 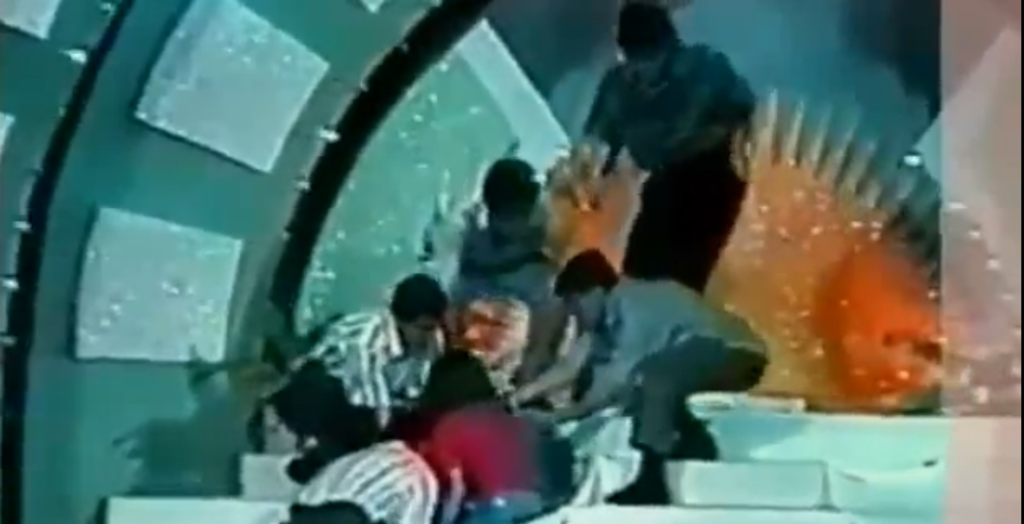 Amidst gasps of disbelief, Kuya Germs immediately called to halt the show temporarily as the crew assisted the actress to the hospital. Shortly after commercial break, an evidently flustered Moreno was seen apologizing to the Aquinos on behalf of the directors, co-hosts, stage designers, and the whole production team. Taking full responsibility for the unfortunate incident, he directed her personal plea to President Cory.

The young Aquino was safely pulled out from that trap and rushed to Makati Medical Center after complaining about pain in her neck, arms, and legs, and after series of tests fortunately declared safe without any fracture or contusion. President Aquino who was excited about her youngest child’s first movie, was also reportedly watching the TV at home and witnessed the incident. She and her other daughters immediately rushed to the hospital. It can be recalled that Cory Aquino was, at first, against the idea of her daughter entering the showbiz industry. After the accident, President Aquino advised the young actress to slow down.

The video clip garnered mixed reactions and opinions from netizens, sympathizing with the actress and blaming the stage designers (for not orienting their guests and not putting emphasis on production value), while some found it funny. There were others who commented on how crude the production elements were—from the stage covered with thin curtain, to the crumpled cue card held by Ricketts and Laxa. One netizen noticed how the Pido Dida soundtrack continued to play, stating “Ang music talaga ang swak. Lagi-laging nalulutusan…ayun, lumusot nga siya sa stage. Pero kawawa siyempre si Krissy” (The music was perfect. They can go through any problem and she fell through the stage. But of course, I pity her).

It was reported that after accident, incident Kuya Germs sent flowers to the young Aquino and paid a visit to Malacanang to personally apologize to President Cory. It was not confirmed, however, if the news circulating then that he knelt down to ask forgiveness to the President was true.

Pido Dida was about two characters, Requiestas (Pido) and Aquino (Dida) who grew up together in an orphanage, thinking they were siblings. They both got adopted but left the family because of abuse. When their own families found them, they discovered they are not related. Pido continued to work as a street vendor while Dida lived in a mansion. Despite their differences, they continued to love each other and eventually tied the knot.

Aquino has been reported to suffer from another bad fall inside her own house, also by missing the last step of the stairs when she was rushing to cast a vote for the 2018 Barangay Elections before proceeding to a particular taping. She scraped her arm and obtained bruises and swelling and complained of a sore neck and ribs.

Because of that classic stage gaffe, merciless people gave Aquino the moniker “Falling Star”. But is she really? Pido Dida out-grossed all films shown at that time. The movie was obviously a hit, and Aquino was enthroned as the certified Box Office Queen. Not bad for a debut movie.

And as the Pido Dida lyrics say: Kahit anong problema, lagi-laging nalulutusan . This is Kris Aquino for you, clearly showing that despite her fall—both in her personal and public life—she has always been one to bounce back like the proverbial Phoenix rising from the ashes, better than ever before.