A huge mural by French street art star JR was unveiled in Paris on Tuesday paying tribute to George Floyd and Adama Traore, a young black man who died in police custody in France.

Traore’s death four years ago has become the focus of renewed protests across France over claims of police racism and brutality following the anger unleashed in the United States after Floyd was killed in similar circumstances in Minneapolis last month.

Some 20,000 people rallied in front of a courthouse in Paris last Tuesday to demand justice for Traore and Floyd, defying a coronavirus ban on public gatherings. 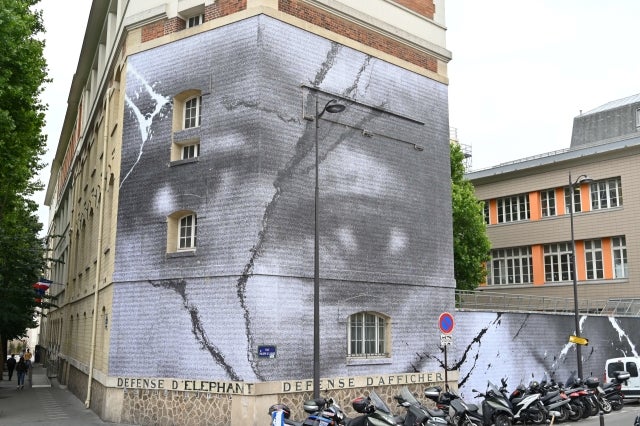 And a further 23,000 attended demonstrations across the country on Saturday calling for an end to police violence. More French protests were called Tuesday as Floyd was laid to rest in Houston, Texas.

Oscar-nominated black French film director Ladj Ly — whose movie “Les Miserables” also tackles the fraught relations between ethnic minorities and the French police — told reporters that “the mural is there to pay homage both to Adama and George Floyd.”

Students at Ly’s Kourtrajme film school in a deprived Paris suburb worked with JR — Oscar-nominated himself along with Agnes Varda for the 2017 documentary “Faces Places” — on the huge photo montage in central Paris.

Faced with rising anger over the behavior of French police, Interior Minister Christophe Castaner said Monday that a controversial chokehold used to subdue suspects was being banned.

Racist insults and comments made by officers on private police Facebook pages have added to public unease.

Traore, 24, died in 2016 after he was pinned to the ground after a routine identity check with the combined bodyweight of three arresting officers, according to the testimony of one of them.

Last Friday, French medical experts said Traore did not die of “positional suffocation,” ruling out the officers pinning him to the ground as the cause of his death.

But a new probe commissioned by the Traore family said his death was caused by the arrest technique.

At a press conference to unveil the mural on Tuesday, Traore’s sister Assa renewed the family’s call for “the police officers to be brought to justice” for what they did to her little brother.