NEW YORK — Paule Marshall, an exuberant and sharpened storyteller who in fiction such as “Daughters” and “Brown Girl, Brownstones” drew upon classic and vernacular literature and her mother’s kitchen conversations to narrate the divides between blacks and whites, men and women and modern and traditional cultures, has died at age 90.

Marshall’s son, Evan K. Marshall, told The Associated Press that she died Monday, Aug. 12, in Richmond, Virginia. She had been suffering from dementia in recent years. 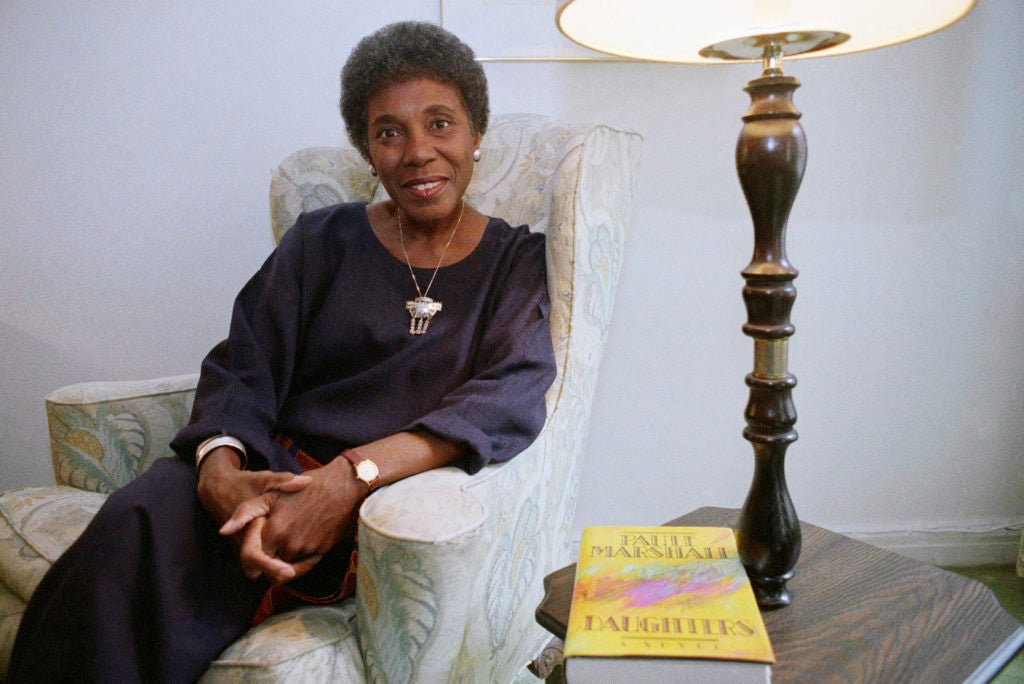 First published in the 1950s, Marshall was for years virtually the only major black woman fiction writer in the United States, a bridge between Zora Neale Hurston and Toni Morrison, Alice Walker and others who emerged in the 1960s and 1970s. Calling herself “an unabashed ancestor worshipper,” Marshall was the Brooklyn-born daughter of Barbadian immigrants and wrote lovingly, but not uncritically of her family and other upholders of the ways of their country of origin.

“Paule Marshall was a profound and luminous writer, as well as a generous teacher, mentor, and friend,” the Haitian-American author Edwidge Danticat wrote in an email to the AP. “Her work delved deeply into what she considered her triangular journey from her ancestral homeland on the African continent, to the Caribbean, then the United States. Reading her novels often felt like reading my own family’s history on a global scale. She will be greatly missed.”

From the start, Marshall contrasted the values of Americans and other Westerners with those from the Caribbean and tallied the price of assimilation. In “Brown Girl, Brownstones”, her autobiographical debut, a young Brooklyn woman seeks her own identity amid the conflicting values of her Barbadian parents — her hardheaded mother and tragically hopeful father. In “The Chosen Place, the Timeless People”, idealistic American project workers in the Caribbean encounter the skepticism of the local community. “Praise Song for the Widow”, tells of an upscale American black woman’s awakening during a Caribbean vacation.

“I like to take people at a time of crisis and questioning in their lives and have them undertake a kind of spiritual and emotional journey and to then leave them once that journey has been completed and has helped them to understand something about themselves,” Marshall told The Associated Press in 1991.

Marshall’s admirers included Walker, Dorothy Parker and Langston Hughes, an early mentor who sent her encouraging postcards in green ink, brought her on a State Department tour of Europe and urged her to “get busy” when he thought the young writer was working too slowly. Marshall received several honors, among them MacArthur and Guggenheim Fellowships and, in 2009, won the Anisfield-Wolf Book Award for books “that have made important contributions to our understanding of racism and human diversity.” She taught at Virginia Commonwealth University and New York University.

Other fellow writers mourned her passing, which came a week after the death of Morrison. Nicole Dennis-Benn, Ishmael Reed and Jason Reynolds were among those posting tributes on social media. Award-winning playwright Lynn Nottage, Marshall’s goddaughter, tweeted that Marshall was the “first champion” of her work and had urged her mother to “Just let her write.”

“I would not be here without her,” Nottage wrote. “#RIP Another beloved elder has crossed over.”

Born Valenza Pauline Burke in Brooklyn, she was an immersive reader who loved old British novels, from “Tom Jones” to “Great Expectations”. But she longed for books that included people more like herself and so made an instant and deeper connection to the poetry in the dialect of Paul Laurence Dunbar, and later to writings by Hurston and Hughes among others. All along, she had been listening to her mother and various neighborhood women gather in the kitchen and expound in “free-wheeling, wide-ranging” style, voices she fictionalized in “Brown Girl, Brownstones” and other works.

“They were women in whom the need for self-expression was strong, and since language was the only vehicle readily available to them they made of it an art form that — in keeping with the African tradition in which art and life are one — was an integral part of their lives,” she wrote in “The Poets of the Kitchen”, a 1983 essay.

Marshall graduated Phi Beta Kappa from Brooklyn College and during much of the 1950s worked as a magazine researcher, traveling to Brazil and the West Indies among other places. Since childhood, she had been “harboring the dangerous thought” of becoming a writer and in her spare time completed “Brown Girl, Brownstones”, published by Random House in 1959 after editor Hiram Haydn suggested she trim her 600-page “sumo-sized manuscript” to the “slender, impressive” novel buried within.

In her early 20s, she had married Kenneth Marshall, with whom she had Evan Marshall, but they divorced when their son was still little. She later married Nourry Menard, a Haitian businessman. Raising a child alone weighed down her already deliberate style and she published just five novels, a memoir and two books of short fiction. She disparaged the old expression “As for living, our servants will do that for us” by adding, “Well, I was the servant.”

Virtually all of her books not only featured women but also women who had adventures and influence. One of her favorite characters was Merle Kinbona of “The Chosen Place, the Timeless People”, a brave and troubled and conflicted soul torn between the Caribbean, England and Africa, a sage and an eccentric who never stops talking, but somehow keeps those around her listening.

“Traditionally in most fiction men are the wheelers and dealers. They are the ones in whom power is invested,” Marshall wrote in Essence magazine in 1979. “I wanted to turn that around. I wanted women to be the centers of power. My feminism takes its expression through my work. Women are central to me. They can as easily embody the power principles as a man.” HM/JB

Charles Santore, illustrator of ‘The Wizard of Oz’, dies at 84