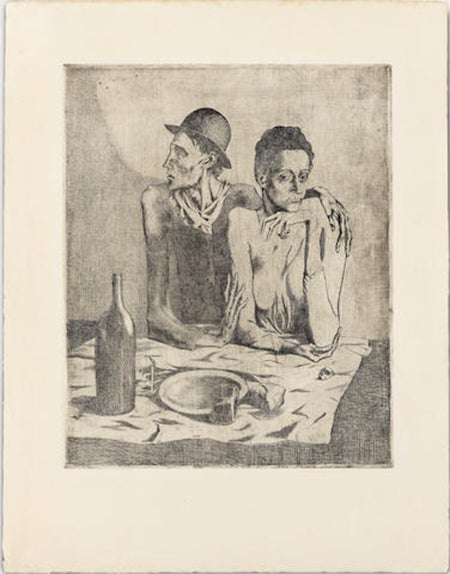 “La Suite des Saltimbanques” comprises 15 etchings and drypoints created by Picasso during the beginning of his career.

They refer to themes that inspired his work during his famous Rose and Blue periods, such as Bohemianism, poverty and the theatrical world.

Several etchings in the series feature acrobats, clowns and harlequins shown behind the scenes, as though caught in private moments.

The standout piece from the collection is “Le Repas Frugal”, which represents a famished-looking couple sitting in front of a nearly empty table.

Due to his poverty at the time, Picasso re-used a copper plate that had been previously engraved by his artist friend Joan Gonzales to create this etching.

“La Suite des Saltimbanques” will be offered at Bonhams’ headquarters in London on June 13, as part of its upcoming “Prints & Multiples” auction.

Picasso in I.Coast? A village tells of its brush with the artist