Spain’s Prado unveiled Wednesday, May 8, the restoration of “The Annunciation”, a 15th-century altarpiece by Renaissance painter Fra Angelico ahead of the museum’s bicentenary celebrations.

Experts worked for nearly a year at the Madrid museum to enhance the colours of the altarpiece, one of the best-known works by the Italian painter and Dominican friar.

The central panel of the altarpiece depicts the moment in the New Testament when the Archangel Gabriel tells the Virgin Mary she will give birth to Christ with the left side showing Adam and Eve’s expulsion from Paradise. 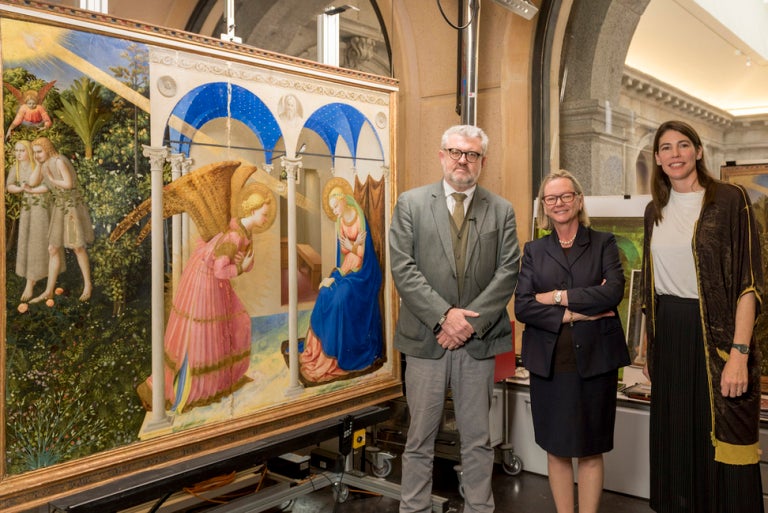 Miguel Falomir with “The Annunciation” (mid-1420s) by Fra Angelico. Image: Museo del Prado. Courtesy Friends of Florence and American Friends of the Prado Museum via AFP

“We have recovered the intense white light that [envelops] the entire composition, the bright and transparent colours of Fra Angelico,” the chief restorer of the work, Almudena Sanchez, told AFP. The cost of the restoration was covered by donations from two patronage associations.

“The Annunciation” will be the centerpiece of an exhibition dedicated to works from the Early Renaissance which the Prado museum will hold from May 28 to Sept. 15.

Spain’s flagship art museum, which received 2.9 million visitors last year, is holding a series of special events and exhibitions to celebrate its 200th anniversary this year. Its walls are lined with masterpieces from the Spanish, Italian and Flemish schools, including Velazquez’s “Las Meninas” and Goya’s “Third of May”. CE/JB

Tatsuo Miyajima’s largest exhibition on show in Shanghai this summer