The youngest sibling is funnier than the eldest, British study finds

When it comes to cracking a joke, there are only two outcomes you can get out of it—either your peers will laugh hysterically at your gesture or they will jeer at your supposed corniness.  If you’re the recipient of the latter, then maybe you should brush up on your comedic delivery. But if you’re the former, there’s a great chance you were gifted with the “funny bone.”

Although technology has yet to pinpoint the science behind being “inherently funny,” British research company YouGov shares findings which suggest that the youngest member of the family is funnier than his or her older siblings.

Based on their study, YouGov explains that “there is a significant divide in the personality traits of the youngest and oldest siblings in British families.” This is seen in the way the siblings deal with their household tasks and duties. Firstborns are reportedly more responsible and organized with a rating of 54%, while the youngest siblings were described to be more “free” and easygoing.

This is exemplified in the chart below which shows that many of the British household’s youngest members believe they are funnier than their elders. 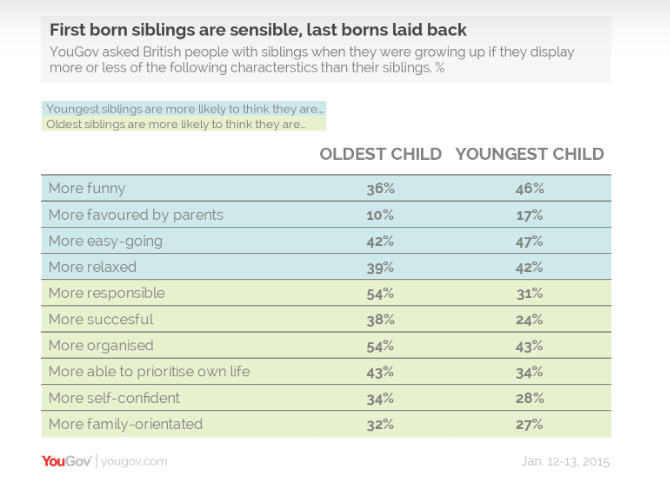 Do you agree with the study’s findings? Tell us in the comments below what you think about it.

People in quarantine share their ‘food cravings’ in these funny, edited pictures

From penne to penis: Shoppers turn to phallic-shaped pasta amidst food shortage