It looks like the question of whether it’s “unfair” to send half-Filipino representatives to beauty pageants won’t stop anytime soon.

Recently, a petition, which prevents Filipino candidates of mixed ethnicities from joining the Miss Universe pageant, has been making its rounds online. The websites, “Yeheey Bizfriends Officials” and “Hopclear,” posted the said online petition.

According to these “sketchy” entertainment websites, Asian countries like Vietnam and Thailand already filed a petition to the Miss Universe Organization shortly after Catriona Gray was crowned Miss Universe 2018. 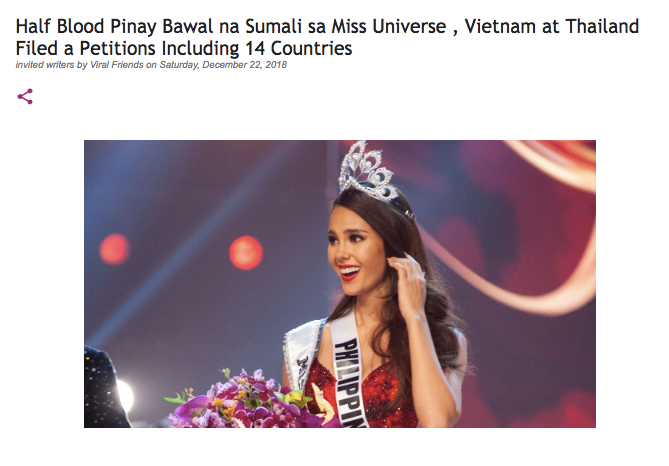 The claim, which is headlined, “Half-Blood Pinay Bawal na Sumali sa Miss Universe , Vietnam at Thailand Filed a Petitions Including 14 Countries,” also mentions 14 countries that have already “signed” the petition.

They even include a quote from Indonesia saying, “We really think this is an insult not only to the organization but to the whole Asian region. The Philippines is the only Asian country to use half-Filipina contestant in the last five years. There is no law that has been violated but it is ethically unacceptable.”

While Indonesia thinks that sending representatives of mixed heritage to the prestigious pageant is “ethically unacceptable,” Miss Universe Organization president Paula Shugart told German Media on Friday that, “We are looking into this kind of possibilities and we respect all country-members. If there are multiple complains then we have to take action. No final decision has been made so far.”

This petition by the other countries prohibiting mixed race Filipina to compete in the Miss U pageant is clearly a discrimination to us Filipinos. Kung ganyan lang naman, hindi dapat Pilipinas lang ang pagbawalan dapat LAHAT ng countries sa Miss U.

Focus on your own country's candidate. Philippines did not do anything wrong to you. It is very unacceptable to straight up judge Phil. and start bringing them down. Work hard! Chop chop!! Damn issues man. Its them embracing their culture more. You dont decide which is which.

But before we believe everything that we see online, it’s important to do a quick fact-check first.

The petition is obviously a hoax as the Miss Universe Organization has not issued any ban regarding the matter. Also, the countries on the list didn’t even file any petition to prevent half-blooded Filipinos from competing in the pageant.

As mentioned in the Miss Universe website, they don’t require proofs of residency or citizenship for applicants; other than the stipulation that says candidates should be 18 to 27 years old and she should not be married or pregnant.

Moreover, it’s important for the titleholder to remain unmarried throughout their reign.