In a horrifying Facebook Live clip, the sea turned red with blood as fishermen brutally slaughtered more than 100 white-sided dolphins and whales.

The gruesome act was part of a local ritual in the Faroe Islands dating back to the 16th century called grindadráp, whereby whales are driven towards the shallow waters where fishermen work together to plunge metal hooks into their blow holes before severing their spines. For Faroe inhabitants, whaling is deeply embedded in their tradition and used to be essential to their survival, as the meat and blubber of the animals are used for sustenance. 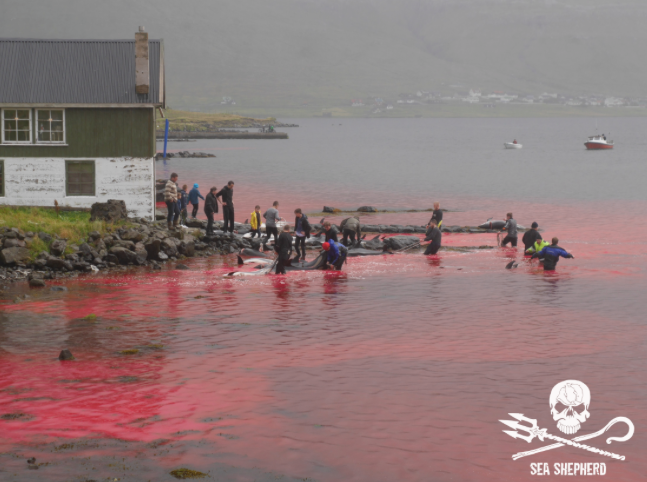 Each summer, countless dolphins and whales are killed off the coast of the islands. A few weeks ago, more than 180 whales were killed as part of the same ritual on the islands.

Marine wildlife conservation society Sea Shepherd shared the disturbing footage on social media. According to them, it was recorded in the village of Hvalvik as part of their campaign “Operation Bloody Fjords,” where 190 Atlantic white-sided dolphins were killed in the most recent hunt — which was the 11th of the year.

The society claimed that in the last 50 years, the Faroese have killed more than 62,000 pilot whales and dolphins; while 1,691 dolphins and whales were killed across 24 grindadráp hunts last year.

So far in 2018, Sea Shepherd says that 561 pilot whales and 255 Atlantic white sided dolphins have been killed in the islands.

However, animal rights activists don’t support this brutal tradition. In a statement, People for the Ethical Treatment of Animals (PETA), graphically described how these animals were killed: “Metal hooks are driven into the stranded mammals’ blowholes before their spines are cut.” 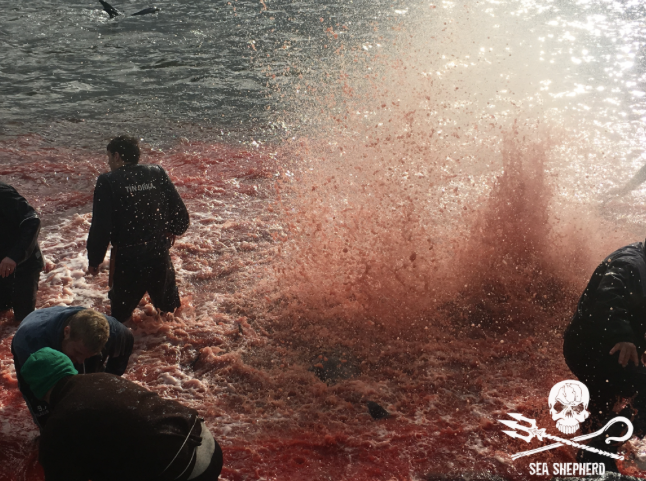 “The animals slowly bleed to death. Whole families are slaughtered, and some whales swim around in their family members’ blood for hours.”

“Whales and dolphins are highly intelligent creatures and feel pain and fear every bit as much as we do,” the group added.

This bloody local tradition also spawned some negative reactions from netizens who were appalled by these stomach-churning footage and images:

It looks like the primitive era! Horrible! So, so so sad😥 Cannot find words to express how I feel.😫

I felt sick watching that.

Why are we not more angry about this….animals, mammals, fish, birds, reptiles and insects have served the human race for millions of centuries…it is our duty to treat them with the respect they deserve https://t.co/q9nNGi8fQ9

After the entire pod of animal killings, Faroe Islands authorities still believed that there is no need to stop this bloody ritual. In an interview with Mirror Online, a government spokesman defended the act, “The use of locally available wildlife is a natural part of life in the Faroe Islands.”

“The pilot whale hunt is dramatic and bloody by its nature. Entire pods of whales are killed on shores and in shallow bays at open sight.”

He also added that the ritual always results in a lot of blood in the water.

“The government of the Faroe Islands states that it is the right of the Faroese people to use its natural resources.

“The pilot whale hunt is regulated and sustainable, and a natural part of Faroe Island life.”