For vegans, they just want to live a lifestyle that doesn’t cause sufferings or death to animals. However, people still can’t refrain from criticizing or mocking them — calling them “preachy” for having such morally high attitude toward their chosen lifestyle.

And yes, this harbored hate towards “veganism” propelled a pro-meat man to show up at a vegan food festival in Amsterdam. In an apparent form of protest, he wore a black tank top with the slogan “Go Vegan and Die,” while gorging on a slab of raw meat that was literally dripping with blood. 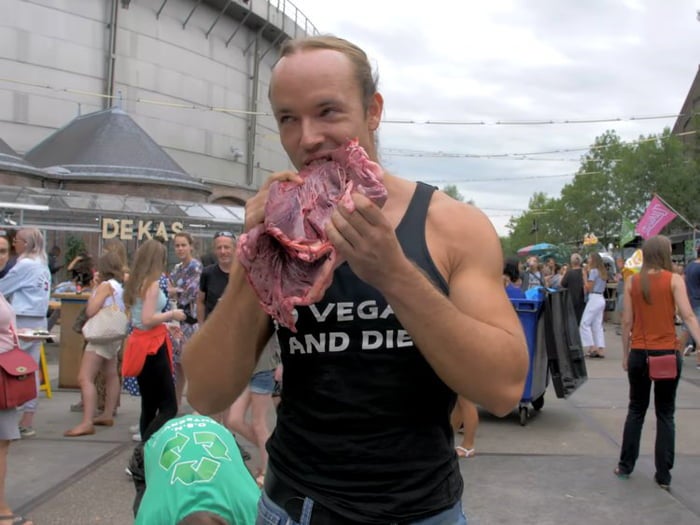 The spokesperson for the festival expressed their disapproval over the man’s action. He explained that the man even staged this shocking pro-meat protest right in front of the kids, claiming that toddlers with “fully-formed opinions on factory farming” needed to be taught a lesson.

“It ruined our health,” the man said when questioned by the police about his protest.

“I was vegan and almost died. They’re making everybody sick.”

Online newspaper The Independent reported that the controversial man, who goes by @sv3rige on YouTube, left after trolling the festival for about an hour.

“While it is of course not forbidden to eat raw meat, it was of course a shocking sight because there was a puddle of blood and fat,” a festival spokesperson told the Independent.

“Besides, there were lots of elderly people and children.”

WATCH: Two drivers settle who gets to overtake by playing ‘Bato Bato Pik’

Learning French can be incredibly hard and funny, and here’s why