They are known for their love for boxes and how they would choose it over the towers, fortress, and comfy cushions or beds their humans bought for them.

They take the shape of every container they try to fit into because “cats are liquid.”

And if their bowl is not overflowing with cat food, it means it’s empty and they won’t eat it until you refill the bowl with cat food. 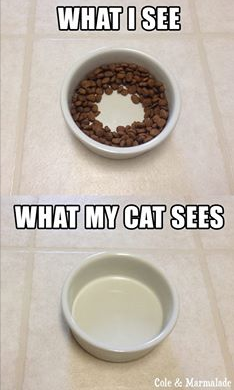 But if there’s one thing that fascinates the internet even more about cats, is that they’ve mastered the art of douchebaggery and not giving a damn as they knock things over all the time. For cats, every object belongs to the floor and needs to be thrown or knocked over.

Knocking over things to the ground and leaving their humans to pick up the mess is just one of the things that prove cats think they are gods. Some people may hate them for it, but it turns out, they’re doing it not because they are the stubborn jerks the internet thinks they are.

According to cat researcher Mikel Delgado, cats might be doing this to get their human’s attention.

“A lot of cats knock things over because they have learned it is a quick and easy way to get their human’s attention,” he tells Inverse. “This behavior typically stems from boredom and/or a failure of the owner to acknowledge cats for ‘good behavior.’”

So it’s still our fault because we don’t keep our cats entertained and we fail to acknowledge their good behavior? HUH. This might be scientifically backed up but honestly, this seems like something a cat would tell us (if they can talk) so we won’t take it out on them — very typical cat move, really.

Aside from that, researchers are also looking at the possibility that their impulse to knock things over is because of their hunting instincts.

“Your cat’s instincts tell her that paperweight or knickknack could turn out to be a mouse,” Dr. H. Ellen Whiteley tells HowStuffWorks. “Her poking paw would send it scurrying, giving her a good game (and possibly a good lunch).”

Cats do a lot of weird things that we can’t explain but we know we’ll still love them despite their impurrfections and even though they can really be a jackass sometimes.