Do you remember that episode of Friends where Chandler can’t quit the gym?

Reddit user Robert Scucci recently went through the same ordeal. According to his post, Scucci needed to cancel his membership to a Planet Fitness gym in Milford, Connecticut because he moved to Nashville, Tennessee. When he tried to do it over the phone, however, the gym told him he either had to come in or send them a certified letter to cancel—even though he already lives in a different state. Instead of getting enraged over the matter, he decided to mail them a breakup letter.

″(I) figured I’d have fun with it because you can either get really mad at something like this or just waste somebody’s time by sending them something official that they then have to take seriously,” Scucci told Huffington Post.

And have fun with it he did.

“It is with deep regret and a heavy heart that I write this letter, but I must come forth with my intentions with sincerity and honesty, ” Scucci began.

“I know I’ve been distant, but it’s because I’ve changed. I have different needs now, and to be frank… you really haven’t changed at all… I don’t want to change you, and it pains me to think that we were once one, but are now separate and in different places.”

Scucci also told Planet Fitness about his new gym, which has a “state of the art whachamacallit that really tones my thighs and masters my ass in ways that were hitherto unknown.”

“I don’t want you to be jealous, or to judge me based on this decision… I still love you, but more like a friend at this point. I’m sorry things couldn’t have been better between us,” he wrote.

He even got a bit nostalgic towards the end of the letter and said:

“I still think fondly of you, and the time we spent together as I drive by one of your many locations. Sometimes, when I’m alone, I even throw on one of my old ‘power-pop workout’ playlists and feel the rush of our past course through me as if we were still one.”

People on Reddit found the letter hilarious, and some also shared their frustrations over trying to cancel their own gym memberships in the past:

You can read Scucci’s entire letter below: 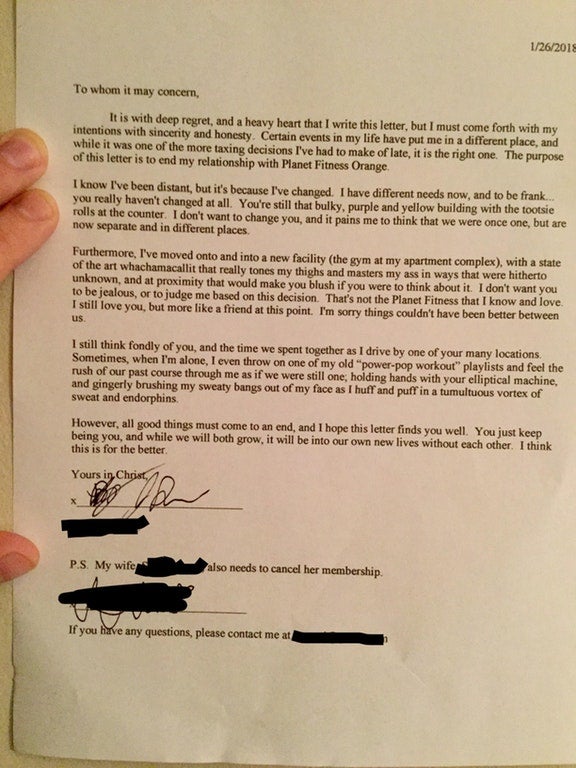 Students get a taste of their own medicine after being caught studying for a different subject in class
Flat Earther attempts to prove Earth isn’t round, blasts off in homemade rocket
Diamonds implanted right into skin in new engagement ring trend
This professor cramming his presentation in a conference is all of us in college
Apparently, funeral strippers are a thing—in China
LOOK: These GIFs ‘reconstruct’ 7 famous ancient ruins around the world
Studio places 84 statues on their roof, one for each man that commits suicide in the UK every week