This public Facebook group serves as a platform for humans to share dog-related content or photos, stories, and videos of their beloved puppers. People also actively send “boops” and advice for those who share concerns about their dogs. It is a strong community bound by humans’ heckin love for doggos and co-pupper parents.

Dogspotting is a public Facebook group where you can share photos and videos of dogs you encounter. The rule is you can’t post your own dog— just those you’ve spotted somewhere. So if you’re the kind of person who can’t go out without taking a photo of a dog you see on the street, you’d definitely want to join Dogspotting and be an active spotter! 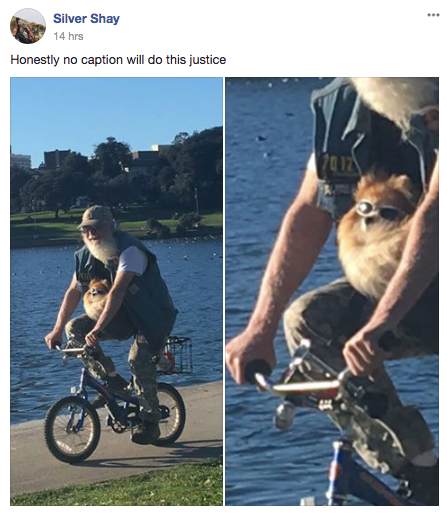 Doge (usually pronounced as Dohj or Dohg) is an internet slang for “dog” and is commonly associated with Shiba Inus or “Shibes”. Doge posts doggo or shibe-related content such as memes, photos, and videos that are either “such cute” or “heckin funny”! There’s no in between. Every post will give you much wow! You will also be visited by different kinds of doggos when you follow this page and good things will come to you if you obey the doggo’s “requests”. 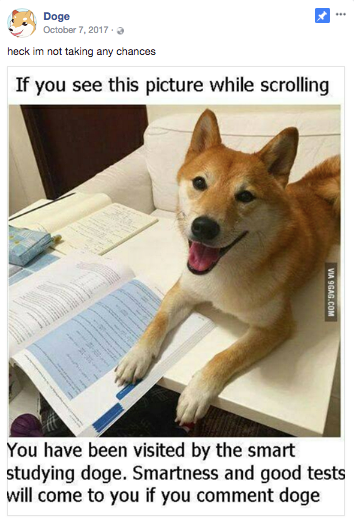 Serving you with the best kind of news and content you’ll want to see every day on your feed. Just like the Doge page, Doggo News also posts doggo memes and dog-related content that will give you a heckin laugh! 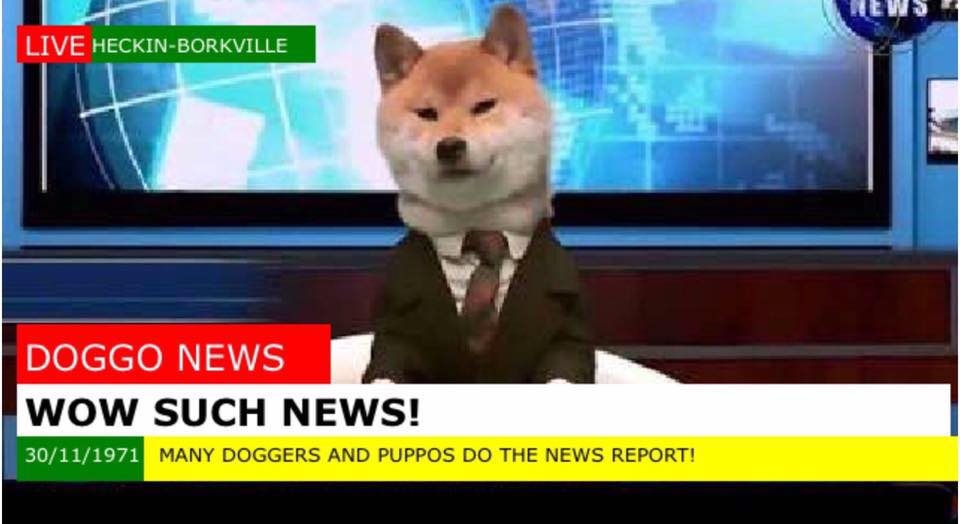 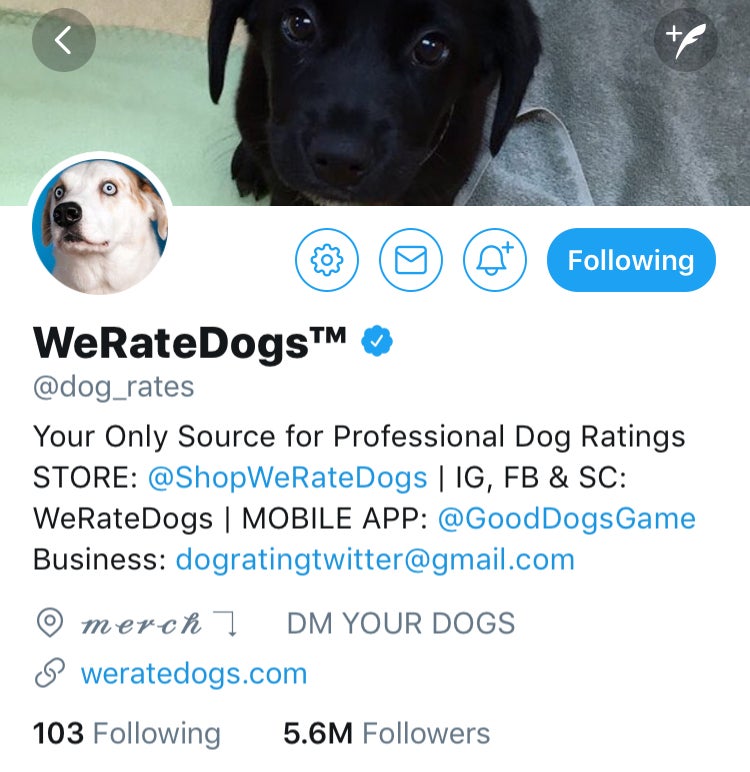 The Twitter account @dog_rates shares submissions of photos and videos of dogs that are too incredible and a-bork-able for humanity. You’ll meet “good bois” that are too pure for this world—so good your heart might cry! 15/10 would follow!

This is Jacob. In June of 2016, he comforted those affected by the Pulse nightclub shooting in Orlando. Four months ago he flew to Vegas to help families of 58 people grieve. Today, he is in Parkland, Florida hugging students who lost classmates yesterday. He is our third 15/10 pic.twitter.com/YlrfUy2nE3 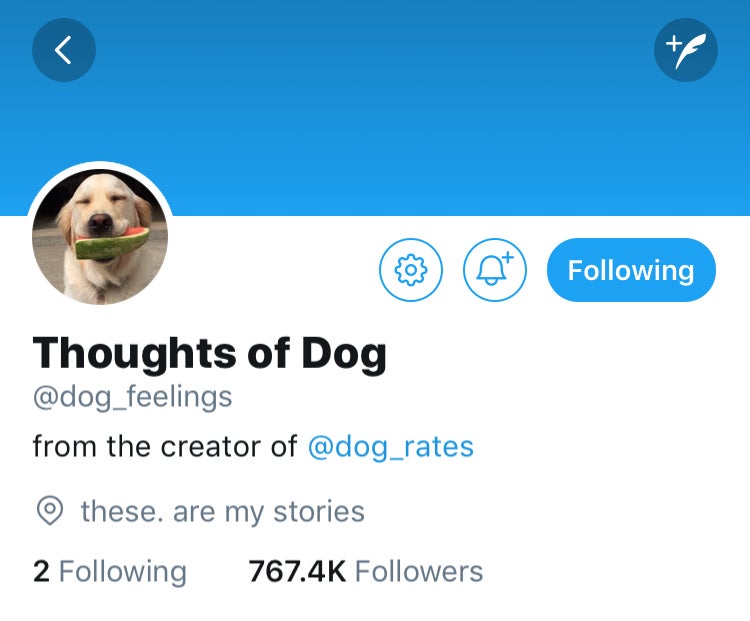 Have you ever wondered what your dog must be thinking every time you look at him/her? The creators of WeRateDogs made a personified account of a dog who shares his/her thoughts and feelings every day. It’s like a watching a dog talk about life and share stories with you personally! You’d definitely look at your dog and wonder if he/she is feeling the same thing.

sometimes. the human gets sad. and i don’t know why. but if i jump. in their lap. and stay there. i can usually fix it They post photos and videos of animals, mostly dogs, that are too cute you might get a heart attack! This account will surely fill your Twitter timeline with daily dose of cuteness and who wouldn’t want that? Like other accounts, they also accept submissions. So if you think your pet is the cutest thing on earth, give them a follow and who knows, they might feature your pet on their account.

All the love for you pic.twitter.com/GhqjpGIWU7 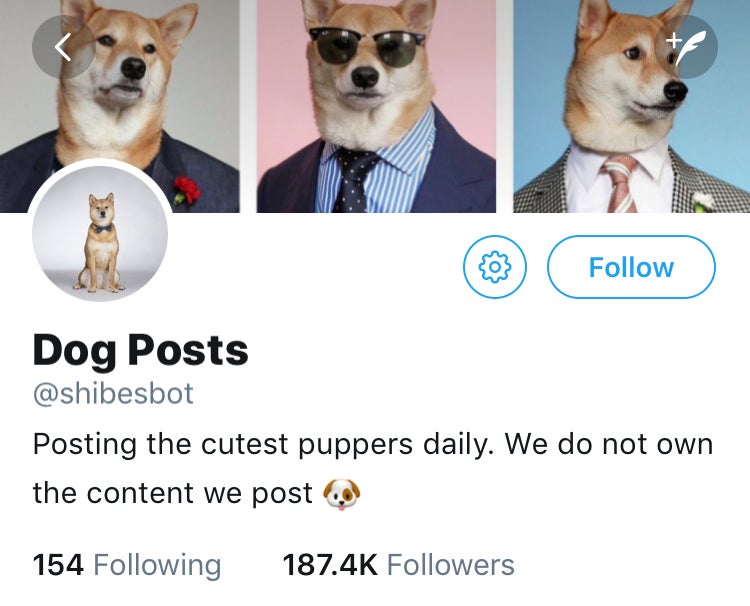 True to their Twitter bio, they post the cutest puppers daily. You’ll definitely scroll through your timeline with lots of cute puppers and doggos. The only thing you might consider is scrolling through their posts can get addicting sometimes. 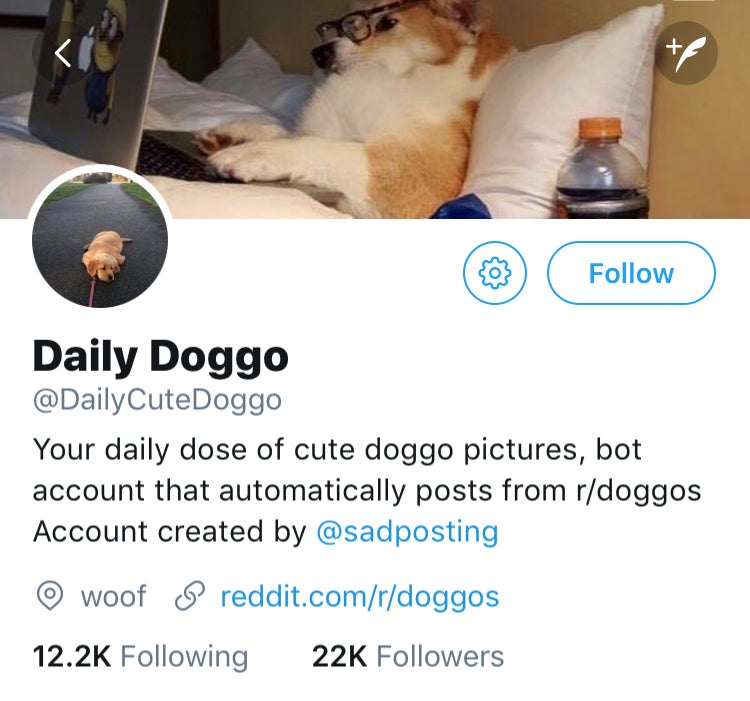 This account will feed your need for a daily dose of dog cuteness! Daily Doggo shares content from a doggo-based subreddit r/doggos that has over 30 thousand “subwoofers” (or subscribers) and is meant for “asking doggos, sharing doggos, and learning about our beloved doggo companions and related doggo-centric topics.”

If you love Shiba Inus, then you’d want to check out these popular accounts on Twitter that posts shibe-related stuff. You can expect seeing shibes always getting stuck somewhere or just being their adorable self. 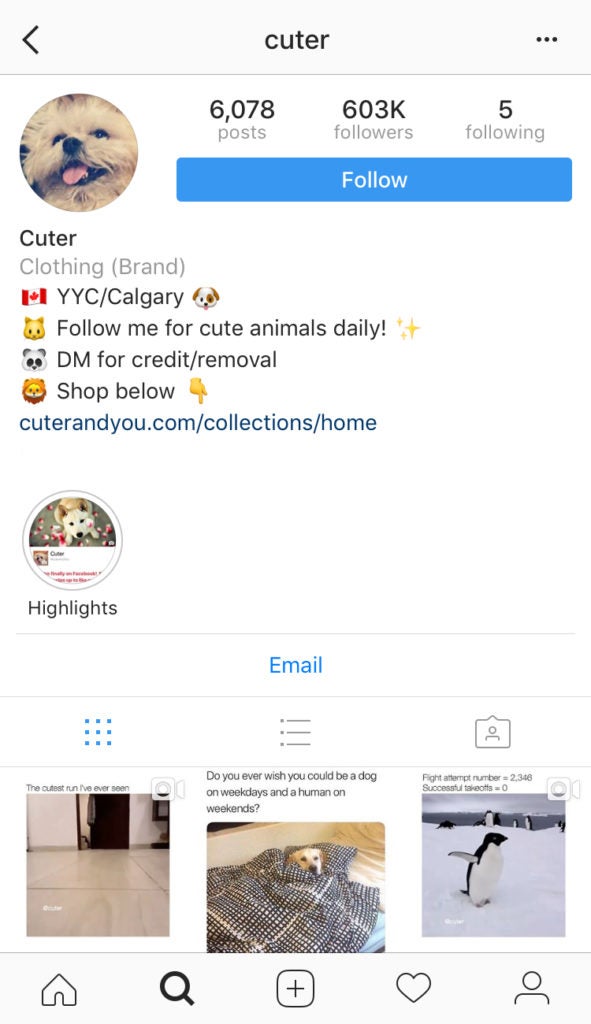 If you’re more active on Instagram than on Twitter, accounts like cuter will feed your need to see cute animals that will definitely improve your mood in case you’re having a bad day. They also post relatable memes that you can share with your dog-lover friends, too! 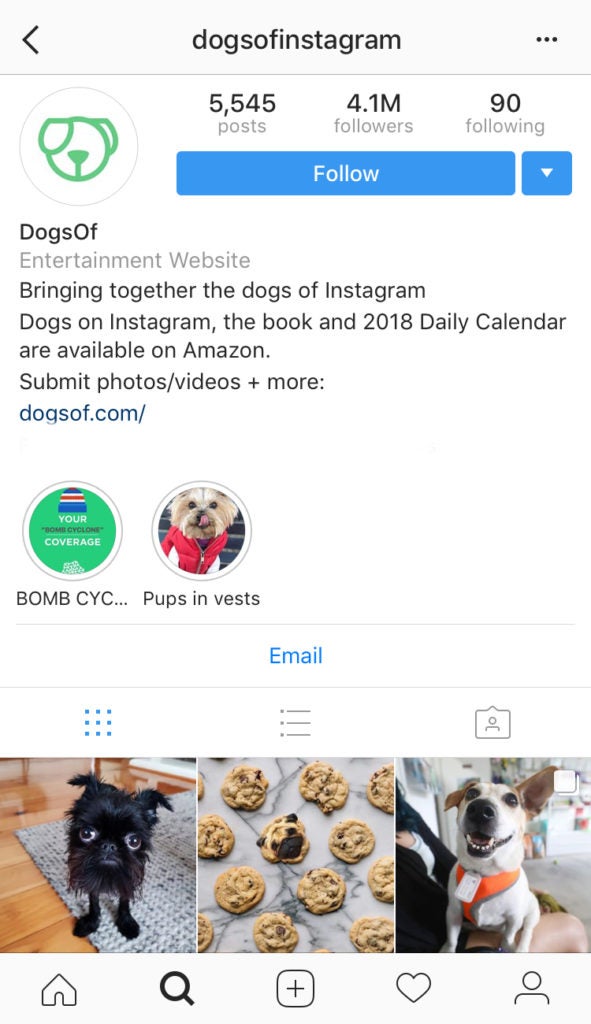 dogsofinstagram or DogsOf is a community of more than 4 million “dog lovers and photographers,
capturing and celebrating moments spent with man’s (and woman’s) best friend.” They share IG-worthy pictures of dogs that might even be more gorgeous than our profile pictures. DogsOf also promotes adoptable dogs through beautiful photography and inspiring stories under the account @dogsofshelters. 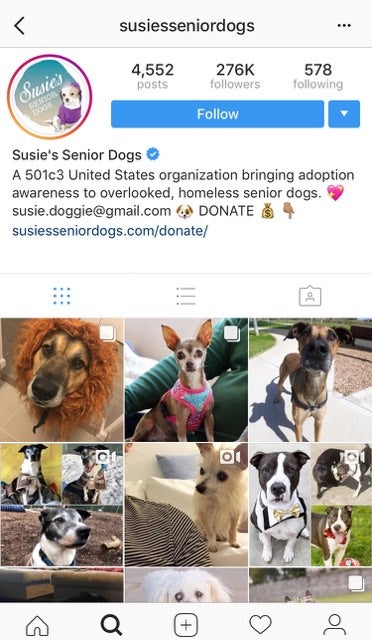 Sussie’s Senior Dogs is an organization in the United States that brings “adoption awareness to overlooked, homeless senior dogs.” They feature photos and stories of several senior dogs who need a loving and forever home they deserve with a family who’ll love them despite their age. 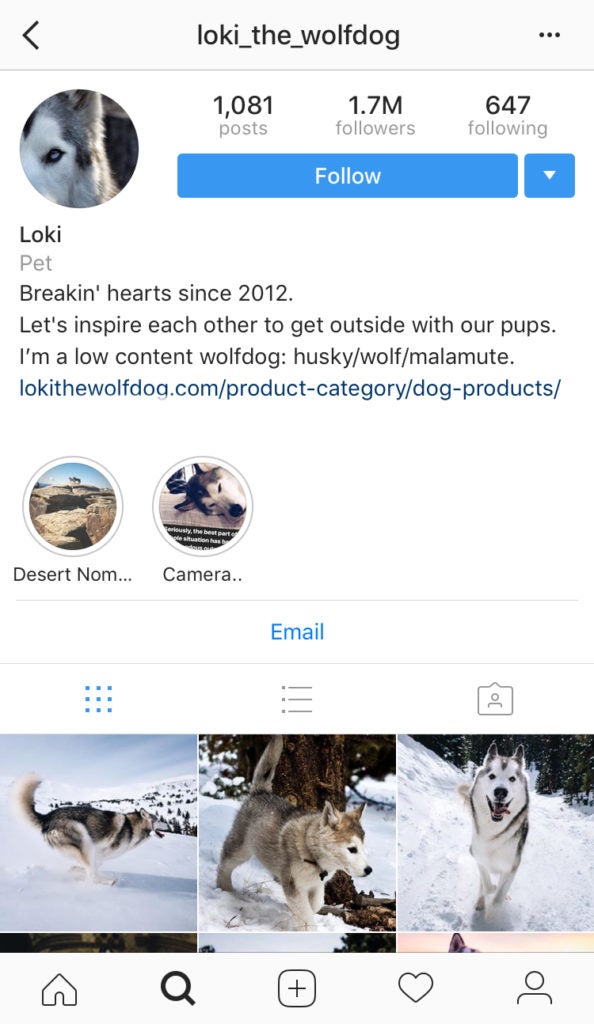 Loki is a husky/arctic wolf/malamute mix living and always going on an adventure with his human Kelly Lund. Loki and Kelly share their stories and photos in the hopes they can inspire others to get out, explore their world, and make memories with their pups. 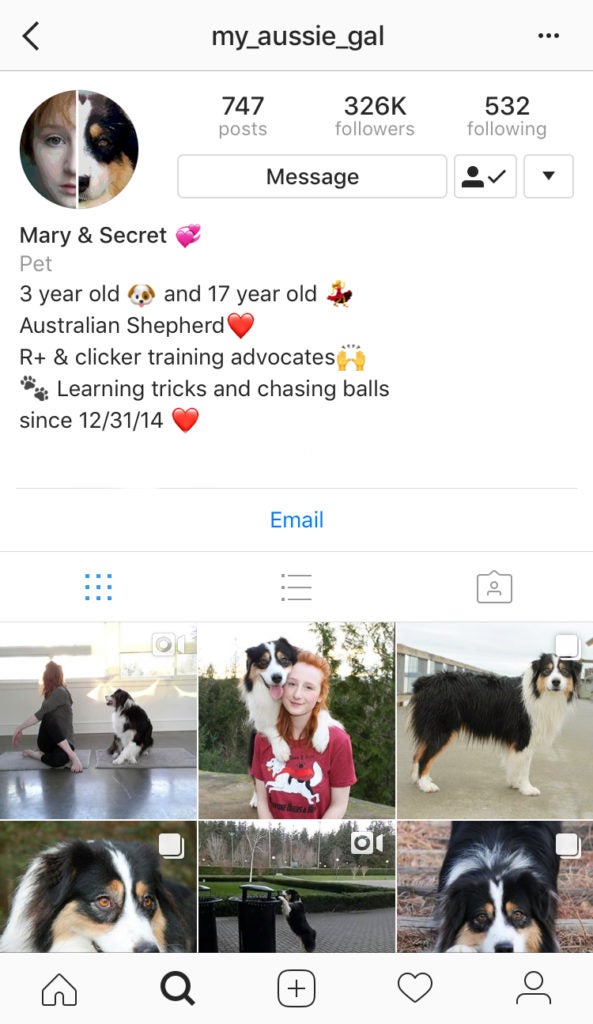 Secret is a 3-year-old multitalented Australian Shepherd who loves doing tricks and “Doga” (dog yoga) with Mary. She has an incredible balance while doing doga, she knows Irish dance, and oh, she paints too!

You’ve probably came across a viral post of a pug doing a parody of popular TV shows and films like F.R.I.E.N.D.S and Harry Potter. Doug The Pug is an internet celebrity with over 11 million followers across his social media accounts and is one of the world’s most famous and most followed dogs. He also loves pizza and he considers himself the “King of Pop (or Pug) Culture”.

I wish these were real tv shows