Follow us:
"Nature Morte: Vase aux Glaïeuls" by Vincent Van Gogh is estimated at between HK$70 million and HK$100 million. Image: Sotheby's via ETX Daily Up

Auction houses continue to announce exceptional lots going on sale at their Hong Kong branches. A still life by Vincent Van Gogh will go under the hammer on Oct. 9 at Sotheby’s Modern Art Evening Sale.

Van Gogh painted “Nature Morte: Vase aux Glaïeuls ” in the summer of 1886, during one of the most transformative periods of his career. At that time, the Dutch painter had left Antwerp and moved into a modest Parisian apartment on rue Laval in Montmartre with his brother Theo.

There he found new energy for his artistic practice, as his brother Theo wrote in a letter to their mother. “He is mainly painting flowers, with the object to put a more lively color into his next set of pictures… He is also more cheerful than in the past and people here like him. To give you proof: hardly a day passes that he is not asked to go to the studios of well-known painters or they come to see him.”

“Nature Morte: Vase aux Glaïeuls” was painted over a still life of potatoes and a bowl. Van Gogh is said to have painted it in the late summer of 1885, while living in Nuenen in the southern Netherlands. Being often short of money, he probably simply reused the painting after his arrival in Paris. Sotheby’s also suggests that he painted over the earlier work because he “felt his art moving in a new and exciting direction.”

This is the first time a Van Gogh painting has been offered at auction in Asia by a major house. It is estimated at between HK$70 million and HK$100 million (between $9 million and $12.8 million). This is a far cry from the record price of $82.5 million achieved by “Portrait of Dr. Gachet” at Christie’s in 1990. 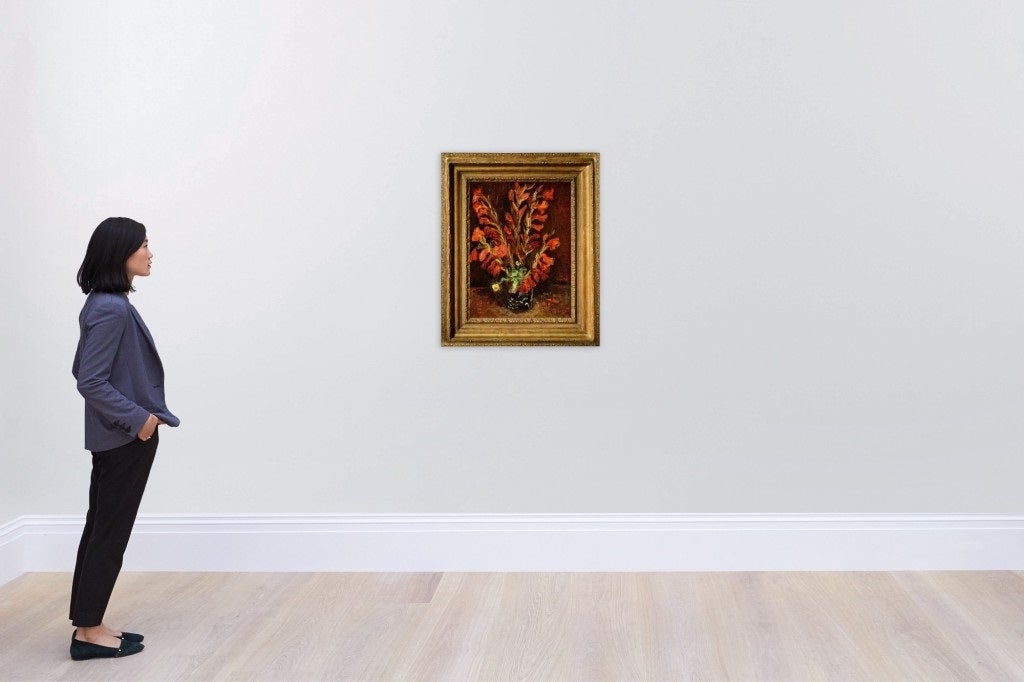 However, bidding could go up given the great rarity of Van Gogh’s floral still lifes on the market. Only two of them, “Still Life, Vase with Daisies and Poppies” and “Fleurs dans un verre,” have appeared on the market in the last decade.

The announcement of the arrival of “Nature Morte: Vase aux Glaïeuls” on the Hong Kong auction market follows the announcement of the arrival of “Untitled (Red Warrior)” by Jean-Michel Basquiat. This painting by the American painter will also go under the hammer on Oct. 9 during the “Modern Art Evening Sale.” Its estimate? Between HK$150 million and HK$200 million (between 19.3 million and 25.7 million). JB

David Bowie painting bought for $4 sold at auction for nearly $90,000