Canon Philippines faces backlash after announcing their complete list of Canon Brand Ambassadors for this year. This year, 2021, the list is comprised of 11 photographers… none of them female… one of them not even Pinoy.

Instagram user @cailinhillaraki called Canon PH out for the lack of female representation in their ambassadors list and reveals the “solution” that Canon PH came up with to face this crisis.

Canon PH’s olive branch was a “Canon Professional Lady Shooters” campaign… needless to say, it was not accepted with open arms. 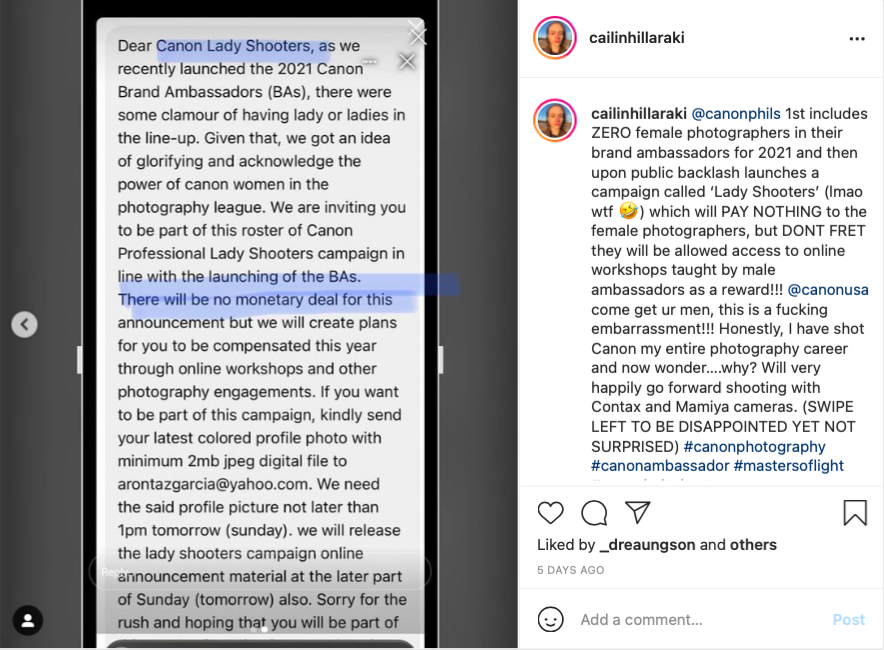 Cailinhillaraki disclosed a screenshot of a message from Canon PH about the Lady Shooters campaign, revealing the fact that the women included would not be receiving monetary compensation for their time and services. But as cailinhillaraki puts it, “DON’T FRET they will be allowed access to online workshops taught by male ambassadors as a reward!!!”

Users viewed this response as a band-aid solution, also scrutinizing the content of the message to the “lady shooters” 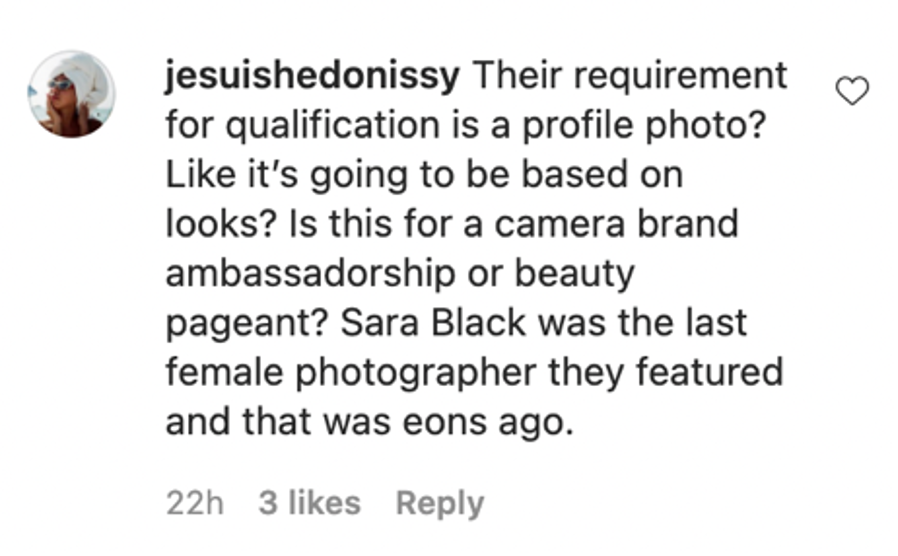 Following the whole fiasco, the brand released an official statement on their Instagram page… at past 1 am in the morning. The language of the statement was seen as vague, sounding positive without acknowledging their fault or apologizing for it.

Of course, the timing of the post also ignited the suspicion of some Instagram users, because honestly… whose PR would ever? 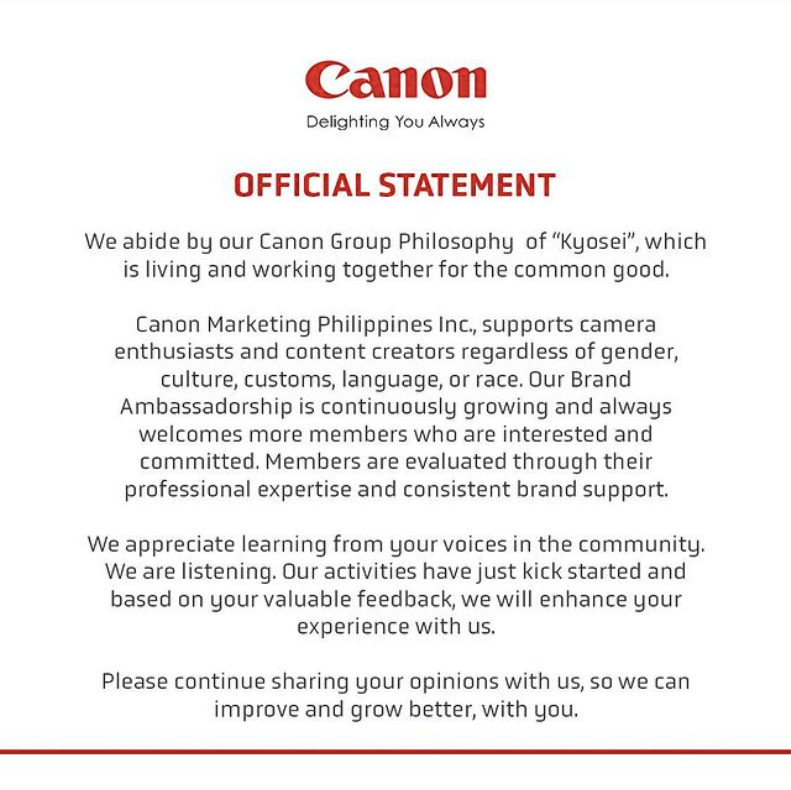 The Canon PH “apology” begs the question, if it “supports camera enthusiasts and content creators regardless of gender, culture, customs, language, or race” then why do they not show it?

Do they truly believe that there are no women out there who have sufficient “professional expertise and consistent brand support.”?

This may be shocking news to Canon PH but there is in fact a vast number of Filipino women, queer, and non-binary photographers out there.

Instagram user @hannahreyesmorales even created a list of Filipino Women/Nonbinary Photographers, but of course there are still hundreds of others outside of this.

Canon PH could argue that the work of women and men are just too different, maybe it wasn’t what they were looking for. But… of course women and men (and everyone in between, for that matter) are going to have different work. Wouldn’t that be even better for their brand, to portray the diverse use of their products? Isn’t that the whole point of art and self-expression? Does the association of a work, with a female artist, make the work any less worthy of recognition and appreciation?

First, excluding women from the ambassador campaign, and then later separating them from it, offering them less in return, does not only insult their sense of worth as women but their identities as photographers and artists.

Whether or not a photographer identifies as a “lady” does not change the fact that they are still a photographer who deserves monetary compensation for their work and the time and effort that they put into this.

This is not to discredit the work or careers of the photographers chosen to be the Canon PH Ambassadors, although some users did think them complicit for still choosing to be included in such a partial list representing Canon users in the Philippines. 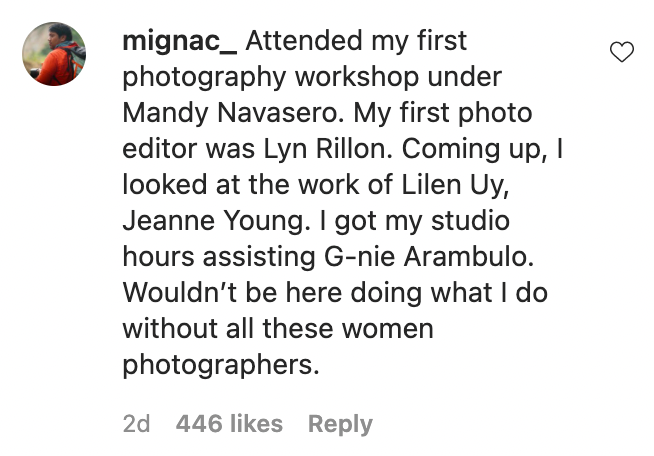 This is not a question regarding the greatness of an artist, but rather what this situation says about the context we are living in. In 2021, one might think that sexism and discrimination are becoming obsolete, but institutions like Canon PH keep proving us wrong.

It is difficult for non-male photographers to “prove themselves” when they are repeatedly being faced with walls created by institutions which are loyally guarded by their gatekeepers.

In Linda Nochlin’s seminal work Why Have There Been No Great Women Artists?, originally published in 1971, and still immensely relevant today, she states that “while great achievement is rare and difficult at best, it is still rarer and more difficult if, while you work, you must at the same time wrestle with inner demons of self-doubt and guilt and outer monsters of ridicule or patronizing encouragement.”

Nochlin argues that it is impossible to fight for the change we deserve if we do not first identify and acknowledge the problems in the first place. It is our responsibility to recognize these things and proactively seek ways in which to improve them. Again, this is not to call out any particular individual. The systems and institutions we are living in are deeply ingrained with years of institutionalized and reinforced sexism from the past.

Nochlin claims that the issue does not revolve “upon the relative benevolence or ill-will of individual men […] but rather on the very nature of our institutional structures themselves and the view of reality which they impose on the human beings who are part of them.”

This is why the statement of Canon PH felt insincere. They were faced with an issue where their lack of inclusivity offended people, they did not acknowledge the hurt that they inflicted, nor did they apologize for it. Their solution to the problem was to “other” women, without pay at that. What message does this send to the people who see this? Every step Canon PH took in dealing with this issue perpetuated the outdated standards of the system.

Nochlin suggests that the answer to her article’s question, “Why have there been no great women artists”, “lies not in the nature of the individual genius or the lack of it, but in the nature of given social institutions and what they forbid or encourage in various classes or groups of individuals.”

Not only do these institutions have to constantly be paid close attention to, but those within it must be willing to lend a sincere and open ear. As Nochlin eloquently puts it “The fault, dear brothers, lies not in our stars, our hormones, our menstrual cycles or our empty internal spaces, but in our institutions and our education-”.

Nochlin believes that once we begin to question one aspect of society, we create a chain reaction. Divulging other forms of discrimination and sexism in our societies, opening discussions for change.

Art is supposed to revolve around self-expression and the chance to view the world through larger and more diverse lenses, stimulating the formation of a broader worldview. Here’s a call to please not be a camera brand that is not only lacking in their sense of recognition for other photographers but is also robbing their patrons of different ways that the world can be perceived.