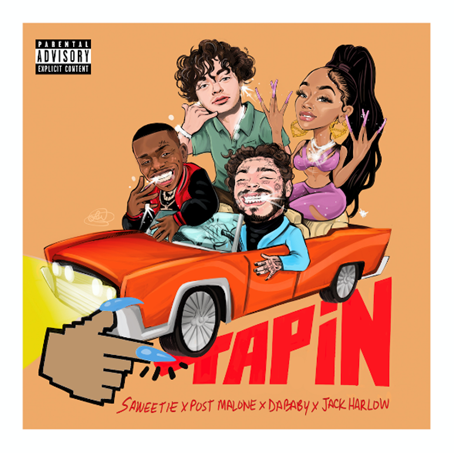 When “Tap In” was initially released, it quickly went viral and inspired over 4.1 million #TapInChallenge dance videos on TikTok. Saweetie fans across the globe are showing out and putting their own spin on the choreography from the original music video, in which Saweetie flaunts her Pretty B*tch style and delivers high energy moves on an iced-out basketball court. Inspired by fellow Bay Area artist Too Short’s smash “Blow The Whistle,” Saweetie’s “Tap In” marks her second single to reach Billboard’s Hot 100 chart and has earned her a 2020 MTV VMA nomination for “Song of the Summer.” The undeniable summertime anthem is skyrocketing up the charts, currently at #3 at Urban Radio, Top 10 at Rhythm Radio, and #1 for two weeks on the U.S. and Global Thriller charts. “Tap In” has amassed 58 million streams with placements on numerous playlists, including Spotify’s coveted RapCaviar, Apple Music’s Future Hits, and more.

Saweetie also tapped in with SHOWTIME’s Desus & Mero for an exclusive interview.

The Maxim summer cover star is preparing to release her Pretty B*tch Music project this fall, featuring production by Timbaland and Danja. Pretty B*tch Music is Saweetie’s self-titled movement, which encourages all women to define their own Pretty. Her empowered meaning of B*tch = Boss. Independent. Tough. CEO. Hyphy. Saweetie also continues to expand her fashion and beauty empire, recently teaming up with PrettyLittleThing for a second “At Home With” collection; all proceeds are being donated to Black Lives Matter.