If you grew up watching SpongeBob SquarePants, you probably remember this one episode where SpongeBob and Mr. Krabs thought that the health inspector was an impostor, so they concocted the poisonous “Nasty Patty” using “Volcano Sauce”, seahorse radish, and toenail clippings.

And to make it even nastier, SpongeBob soaked it in toilet water and Mr. Krabs used his stinky gym socks to dry it up.

Despite its “gross-looking appearance”, the creator of this one-of-a-kind burger, semi-pro food extraordinaire Danny Do, decided to make use of the extra time on his hands and turn the infamous menu into a real one.

(We don’t know about you but it looks appetizing right?!)

I present to you: The Nasty Patty from SpongeBobI made a turkey burger crusted in pea snap crumbs, a goat cheese…

On his Facebook post, Do mentions that instead of using actual toenail clippings (which would be weird), he made “turkey burger crusted in pea snap crumbs, a goat cheese garlic aioli, a pea and turkey gravy, Swiss chard veins and leaf, on a cranberry brioche bun.”

Ever since it was posted, Do has been getting positive reactions from online users.

One Facebook user commented, “Now that is a mother f*cking burger,” to which another person replied with, “Imagine reading those ingredients on a menu and THAT comes out?”

After his post went viral, his only wish now is to get noticed by Andrew Rea—the guy who runs “Binging with Babish” and is known for recreating recipes featured in films and video games. 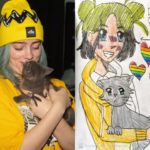