Follow us:
This picture taken on March 10, 2012 shows guests in the bar of the new Ice Hotel in the village of Jukkasjarvi, near Kiruna, in Swedish Lapland. The Ice Hotel gets new design and is reconstructed every year, and is dependent upon constant sub-freezing temperatures during construction and operation. Image: AFP/Francois Campredon

High above the Arctic Circle and nestled in the snow-dusted forests of northern Sweden, gaggles of tourists gathered on a February morning for a glimpse of hallways, bedrooms and a wedding chapel sculpted from ice, part of the 30th incarnation of Sweden’s ice hotel.

Stopping in blue-white hallways to take snaps of a chandelier and ornately decorated bedrooms entirely carved from ice, the tourists are among the 50,000 day visitors to the hotel every year, founded in 1989 by a hotelier looking to attract visitors to the remote town of Jukkasjarvi, 200 kilometers (125 miles) north of the Arctic Circle. 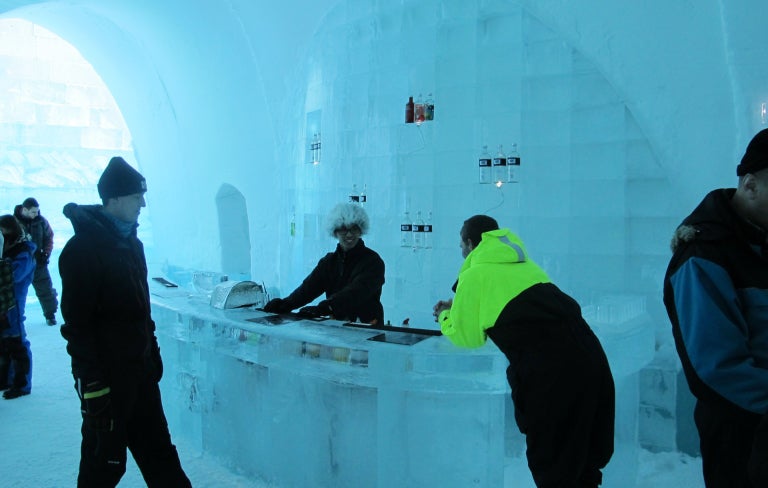 This picture taken on March 10, 2012 shows guests in the bar of the new Ice Hotel in the village of Jukkasjarvi, near Kiruna, in Swedish Lapland. The Ice Hotel gets new design and is reconstructed every year, and is dependent upon constant sub-freezing temperatures during construction and operation. Image: AFP/Francois Campredon

Built every October from the frozen waters of the nearby river Torne, the winter hotel has 35 bedrooms.

Temperatures reach -5 degrees Celsius (23 Fahrenheit) in the rooms, which start at around three times the average price of a night in a three-star establishment in Stockholm.

Individual suites cost more, and feature sculptures and designs by artists from around the world.

One room inspired by the aurora borealis (the northern lights that can be seen in the skies nearby) features lighting that changes colour, as well as a giant snow sculpture of a reindeer’s head, all set to a soundtrack of ambient music and, occasionally, reindeer grunts.

Around 20,000 guests spend a night in the hotel every year.

But 25-year-old guide Julia Hansers said guests usually react less to the cold than to the tranquility.

“A lot of people coming here live in the city, and there you always have some sort of sounds and noise around you, and inside the ice hotel it’s completely quiet,” said Hansers, peering out from under a thick woolly hat.

Bo Bjerggaard, a gallerist from Copenhagen, spent a night wrapped in a sleeping bag and a reindeer-skin throw.

“During the night I had to get up and then it was of course cold,” Bjerggaard said, standing outside in the hotel’s dazzling white courtyard made from snow.

“Then (it’s) great again when you come back into the sleeping bag; you sleep so well because of the temperature,” he said with a smile.

Guests can also enjoy a drink in the ice bar, where all beverages are served in glasses made from ice.

Since 2016 the hotel has also used solar panels to generate electricity to cool a nearby building to below zero to allow them to keep 20 rooms frozen all year round.

When spring arrives, the winter hotel’s rooms are closed and it melts back into the river until October, when construction begins again. JB