It’s safe to say The Witcher is on everyone’s lips these days. In less than a month of it being released, it became one of the most-watched series of 2019, as reported by Parrot Analytics. Having watched all the episodes in a weekend, it can be hard to say goodbye to Geralt until he returns in 2021, but don’t worry – we are here to help you get through the waiting period! This calculator lets you go beyond the eight episodes to get the complete Witcher experience. 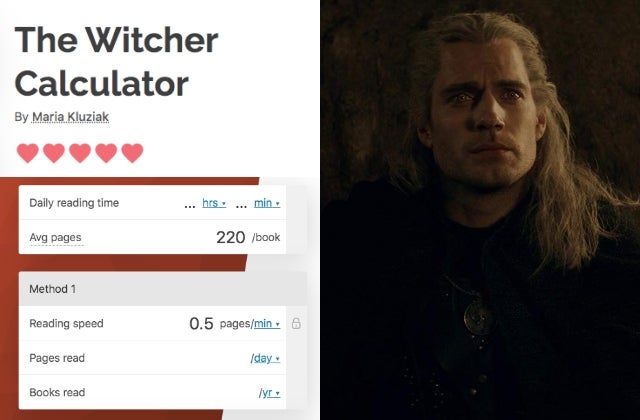 Thanks to the streaming platform, the world went absolutely crazy for ‘Geralt of Rivia’ and his adventures. It can be clearly seen in the sales of the already tremendously popular video games. Sources report an all-time record of 100,000 people buying and playing The Witcher 3: Wild Hunt since the release of the series, and that’s just on Steam alone! The books from Andrzej Sapkowski’s The Witcher saga are also benefiting, being translated and sold in record numbers.  The Witcher’s American publisher announced a return to the press of the whole series, with an additional 500,000 printed copies of the series to meet the rapidly growing demand!

If you found yourself terrified by the thought of waiting for The Witcher’s second season – don’t fret! As you can see, there’s a lot of The Witcher content to keep yourself busy with, and our calculator will help you plan it all out! Use it to see how long it will take you to read The Witcher books, estimate the time it should take you to play through the games and learn in what order you should do these things to get the most fun and enjoyable experience. Thanks to The Witcher calculator, you can bet that the midseason gap will pass before you know it!

After watching episode 1 of ‘The Witcher’, here’s what we think of it