Catch this early Christmas treat from the OPM Hitmen for a night of fun and entertainment as they take us back to the 90s and give back to the hemophilia community.

The OPM Hitmen composed of renowned singers Rannie Raymundo, Richard Reynoso, Renz Verano and Chad Borja will be holding a Christmas benefit concert at the Music Museum this Dec. 14.

Entitled Music for Life, the benefit show intents to raise funds for Hemophilia Advocates-Philippines (HAP), a patient organization for those affected by hemophilia.

Hemophilia is a lifelong, genetic blood disorder where the blood does not clot. It causes physical deformities, excruciating pain and in severe cases, death. The World Federation of Hemophilia estimates that around 10,000 Filipinos are affected by hemophilia and around 1-million from other type of inherited bleeding disorders such as von Willebrand Disease. Treatment for hemophilia and other inherited bleeding disorders is very expensive that ranges between P5,000 to hundreds of thousands per incident. 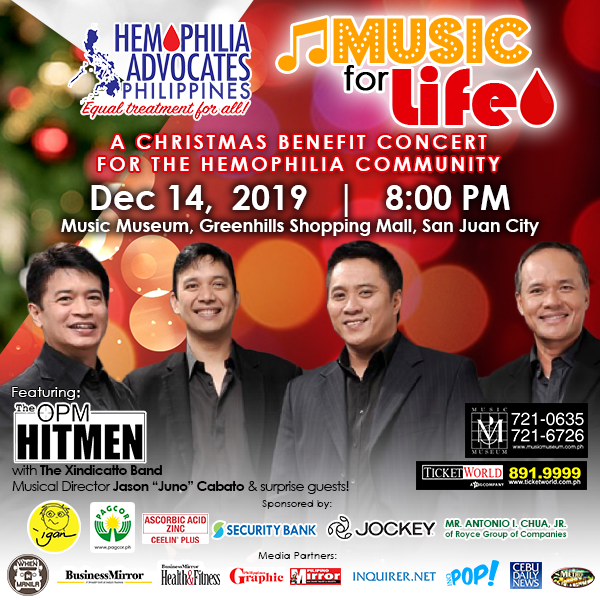 “We feel for those affected by hemophilia and other bleeding disorders and we want to help them in our own little way through this benefit concert,” the OPM Hitmen said in a press release.

World-class performances from the award-winning concert group await as they capture everyone’s hearts with the songs Filipinos grew up.

The proceeds of this event will fund HAP’s programs and projects so the organization can continue giving their members medical and financial assistance, educational support and livelihood opportunities, and equal treatment for all.

Hemophilia Advocates-Philippines
Music for Life
OPM Hitmen
The OPM Hitmen to hold benefit concert for Hemophilia Community
INQPOP! Stories we think you might also like: