Follow us:
Brookhaven police at the scene of the crime in doughnut "carnage." Image: Facebook/@BrookhavenPD

If there is one thing that most American cops love, it is doughnuts. Which is why it broke some local police officers’ hearts when they could not rescue a truckload of doughnuts from falling victim to the “five-second” food rule.

Officers from the Brookhaven Police Department first received a report about a doughnut truck incident in Georgia, United States last Tuesday, Nov. 26. A Krispy Kreme delivery truck filled with craters of fresh doughnuts apparently scattered the products on the side of the road. 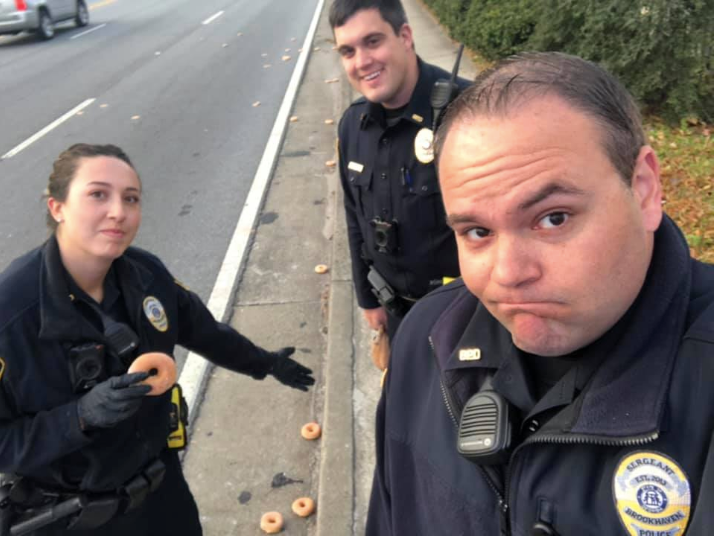 Brookhaven police at the scene of the crime in doughnut “carnage.” Image: Facebook/@BrookhavenPD

The police stated that the scene was “total carnage.” The doughnuts were scattered all over the street and even in the gutters, as seen on the department’s Facebook page on the same day.

“The response time was stellar, but we couldn’t beat the [five-second] rule,” the department wrote.

The police department also mourned the “senseless loss” of the delicious pastries, which they claimed “deeply affected” all their officers.

“We ask that you keep our department in your thoughts and prayers as we mourn this terrible moment,” the police office jested.

Just moments ago, your #BrookhavenPolice officers answered the call each of us fears most 😳. Dozens of donuts fell from…

The locals got a kick from the police department’s comedic posts. The officers even stood at the side of the street, with one officer holding a doughnut in her hand, as the department further stated, “The final resting spot of the once glorious glazed donuts.”

The final resting spot of the once glorious glazed donuts.

The officers also took a photo of some of the crates in the curb.

“Words are not enough to describe the sadness captured in this picture,” the police said.

Words are not enough to describe the sadness captured in this picture.

One commenter named Julie Kahrs decided to ride along with the officers, as she joked that perhaps they need counseling for their loss.

She said, “Those horrific sights will never leave them.” JB