While some may prefer to begin their forever in a picturesque scenery, wearing white gowns and clean suits, a newlywed couple decided that the perfect place to strike a pose for their “post-wedding” photoshoot was in a muddy field in Kerala, India. 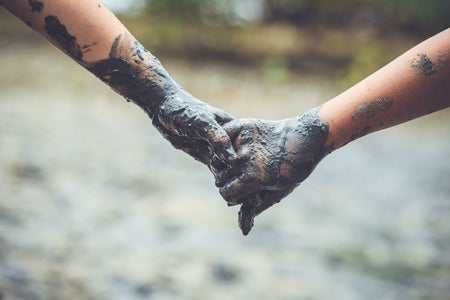 The lovebirds, identified as Jose and Anisha, could be seen lying around the field in various poses, often locked in each other’s arms slathered with mud. The pictures, uploaded by the photo studio Binu Seens Photography via Facebook on Nov. 18, roused hilarious comments from netizens, after it was reposted in Twitter.

Some netizens corrected the poster by saying it was a “post-wedding” shoot, even pointing at the bride’s sindoor (red cosmetic powder worn by married women) on the top of her head.

Another netizen replied that maybe it was too soon in the stage of the newlywed’s marriage to be throwing mud at each other.

“Usually couples do [the] [mudslinging] after a few years but ok,” one @sumeidha said.

Usually couples do mud slinging after a few years but ok.

To that, another Twitter user @Tweeter_kay had a witty retort.

The mud slinging will continue after marriage

“The [mudslinging] will continue after marriage.” JB

LOOK: This couple found the humor in their engagement photo fail