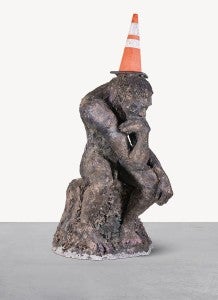 “The Drinker” was set to go under the hammer on Nov. 19 as part of Sotheby’s Curated Contemporary sale, before being pulled from the auction’s catalog at the last minute.

The 7-foot-tall statue satirizes Rodin’s “The Thinker”, with Banksy swapping the iconic pensive philosopher for a drunkard wearing an orange traffic cone on his head.

The anonymous British artist originally left “The Drinker” on display in 2004 in a small square located near Shaftesbury Avenue in London.

The subversive statue was “kidnapped” shortly after by fellow British artist and founder of the Art Kieda collective Andy Link, who registered his found property with police.

Link also asked Banksy for a ransom, with The Guardian reporting that the elusive street artist was only willing to offer “£2 towards a can of petrol” to set the artwork on fire.

Link held onto “The Drinker” until 2006, when the monumental statue went missing from his back garden with the thief only leaving the orange traffic cone behind.

Although the artist reported the heist to police at the time, “The Drinker” only resurfaced this autumn in the catalog of Sotheby’s Contemporary Curated auction.

In a now-deleted sale listing, the auction house claimed that the sculpture was acquired by its current owner through Banksy’s former dealer Steve Lazarides in 2014, without making any mention of Link.

On the eve of the London sale, Link claimed “The Drinker” was going under the hammer illegally, arguing that his ownership was clear since he found the sculpture abandoned on the street.

“I did the right thing, and reported it to the police. I do not understand how Sotheby’s can sell this when I have such proof,” he told the Guardian, also adding that he could not cover the legal costs necessary to challenge the auction.

An hour before the sale was due to start, Sotheby’s removed the allegedly stolen artwork from its catalog, without sharing any detail about the reasons behind this last-minute decision.

Art Newspaper reported that Link and the current owner were informed of the withdrawal by the auction house earlier this Nov. 19.

In a letter dating from Nov. 18, Link was informed that Sotheby’s acknowledged “the interesting story of his involvement in this piece in 2004,” but saw “no reason why the consignor of the work, subsequently authenticated by Banksy’s authentication process, does not have title to sell.”

According to The Art Newspaper, Sotheby’s legal team also stated that it “would require a cogent and persuasive case, with appropriate evidence before — after taking instructions from the consignor — altering the planned sale process on any legal grounds relating to purported title claim by you.”

The satirical painting surpassed its pre-sale high estimate of £2 million (about $2.4 million) to eventually go under the hammer for £9.8 million ($12.1 million), setting a new auction record for the elusive British artist. IB/JB 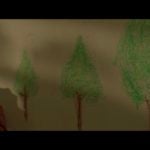 Six things every family can relate to in the Indonesian film, ‘Keluarga Cemara’ 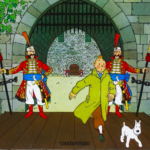