Before all the many characterizations in TV and in cinema, before the classic 1972 tribute song by Don McLean, even before you may have had that notebook with “The Starry Night” on the cover, there was once a certain Dutch painter, and his name was Vincent van Gogh — but you probably already knew that.

Undoubtedly one of the most important artists of the 19th century, Van Gogh rightfully made a name for himself, despite tragic circumstances, through his significant contribution to post-impressionism and art in general. Considering Van Gogh as mainstream may even be a bit of an understatement. 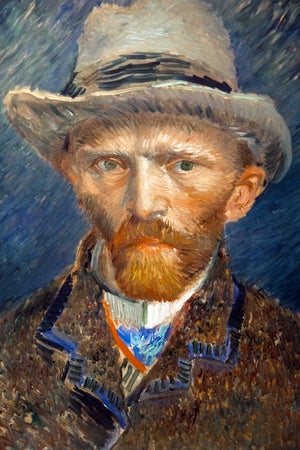 In what netizens described as “gatekeeping,” influencer and calligraphy artist Abbey Sy took to Twitter her disapproval of an upcoming Van Gogh digital exhibit in Taguig, worried that the painter has become “super mainstream” for her taste.

In a now-deleted series of Twitter posts on Oct. 1, Sy aired her dismay as she says “most people don’t know his (Vincent van Gogh’s) work as a whole.”

The coming multi-sensory exhibit “Van Gogh Alive” will feature the painter’s works on digital screens, something Sy did not seem too fond of.

“But Van Gogh’s work on digital screens? I’d prefer going to a museum,” she stated. “Also for sure puro pictures nanaman yan pang #content and honestly it doesn’t give respect to the artist. There’s a reason why most museums don’t allow photography in the first place.” 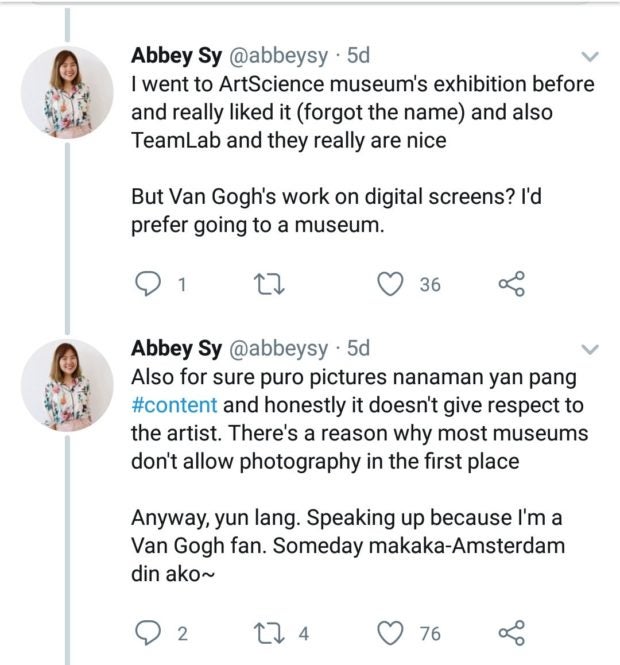 The renowned painter’s original works are displayed in the Van Gogh Museum in Amsterdam. This fact makes his actual paintings inaccessible to the rest of the world, something pointed out by netizens who slammed Sy’s perspective for its “elitism.”

“I’d rather be going to a museum” ang elitist naman ng POV.

blocking ab b ey sy is self care ☺️☺️☺️ pic.twitter.com/3SOa4sbb7O

Netizens offended by Sy’s tweets minced no words in labelling her a “hypocrite” for seemingly not wanting to share Van Gogh’s work to others.

Twitter user @scorsaguin turned the tables on Sy’s comments by poking fun at the artist’s Instagram post of a picture of herself with American artist Andy Warhol’s painting as her background.

Another Twitter user, @itsurchingu, pointed out that Van Gogh’s paintings and art in general are “for everyone,” slamming Sy and other influencers as “selfish” when it comes to art.

Sy claims she “didn’t expect people to get hurt or offended” by her post, as stated in her public apology on Twitter yesterday, Oct. 8.

“I sent those tweets as my personal opinion…” she cited. “I’m sorry to those who took it another way and that was not the intention by all means. At the end of the day, art is for everyone and it is up to us on how we want to consume it.”

Her statement, however, still received backlash as most still found Sy’s apology unapologetic. Netizens questioned her on the intention of her tweet, with some giving her tips on how to issue a proper apology.

If offending people (who do not have the means in their lifetime to travel to other countries to view artworks in museums) was not the intention, then what was the intention then?

Why issue an apology when you’re not apologizing at all? You could’ve just straight up said “You didn’t understand my point but whatever my post is not problematic, your understanding of it is” cause that’s what you essentially said. You apologized for nothing.

Hello. Thanks for the apology, but you can’t say sorry with a closed fist.

“Van Gogh self-portrait”, “The Starry Night”, “Sunflowers”, “Bedroom in Arles” and “Cafe Terrace at Night” are just some of Van Gogh’s most famous works. 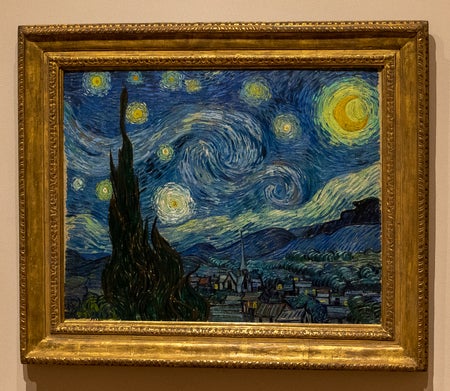 Here lies the irony, though, as people are engaged in the word war: it is no secret that Van Gogh met his end without experiencing the level of respect and praise people have for him now, as he unfortunately took his own life a poor, lonely man.

Considered the quintessential tortured artist, Van Gogh has come to stand for outsiders, the poor, and struggling artists — a fact that has led to the appreciation and admiration of his works by people from all walks of life. JB

Van Gogh’s letter to art critic on show in Amsterdam