“I don’t have to stop writing songs about heartache and misery,” the pop icon declared in her makeshift stool-throne in NPR’s Tiny Desk Concert on Oct. 12, as she reaffirmed her hold on her title as “the Queen of Breakup Songs.”

During her set in the radio station, she performed three exclusive stripped-down versions of songs from her latest album “Lover”, which she described as a “very, very happy romantic album.”

Tiny desk, BIG mood. Thank you @NPR for that awesome experience, I can’t wait to relive it when #tinydesk comes out! 📷 @BobBoilen pic.twitter.com/P3LdI2wXXU

The singer-songwriter also threw in a surprise performance of her ballad “All Too Well” from her 2012 album “Red”, which she personally thought was one of the best songs she ever wrote for the album, and apparently, based on numerous fan-based rankings of all her songs, her fans agree.

The tiny office space in Washington D.C. attracted 300-plus employees and guests eager to watch her perform live, according to NPR on Oct. 16.

“Wow! This is a lot of people in a tiny office!” Taylor commented when she entered the room.

The pop superstar performed her “Lover” tracks in the vein when they were first written, through an acoustic version of “The Man” and a piano version of “Lover”. In between every song, Taylor shared some insight on her inspiration for writing each one of them.

The songstress, who even had an outfit change behind the tiny desk, also spoke about a question consistently asked by interviewers for about fifteen or sixteen years now.

“What will you ever do if you get happy? Like, what will you write about?” Taylor shared the query, causing the crowd to erupt in laughter.

She was silent for a brief moment and asked herself, “What would happen if I was ever happy?”

Apparently, Taylor got the answer to her question when she was writing “Death by a Thousand Cuts”, a seemingly out of place breakup song in “Lover”. Taylor revealed that through the course of the album’s conception, she had a lot of conversations about breakups, through her friends who were going through some tough times. She was also reading books and watching movies with well-executed breakup scenarios.

“This all culminated in me, like waking up one day with all these heartbreak lyrics in my head and I was like, ‘It’s still here!’” she said. Her realization was met with applause and cheering from the audience.

Apparently, “Death by a Thousand Cuts” itself is about saying goodbye to a lover, and all the pain that it causes. “This song is my proof that you know, I don’t have to stop writing about heartache and misery – which for me is incredible news!” 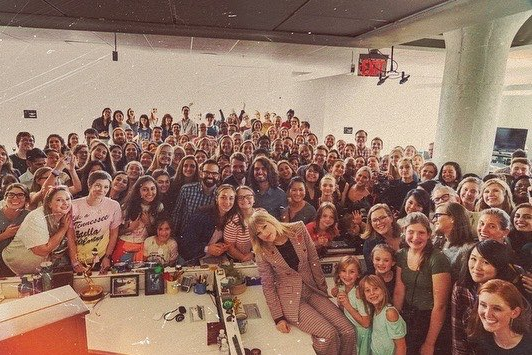 The lyrics she sang showed her skill in stringing together metaphors and concrete images into her melodies: “Saying goodbye is death by a thousand cuts/ Flashbacks waking me up/ I get drunk, but it’s not enough/ ‘Cause the morning comes and you’re not my baby.”

Regardless of the space and the venue, Swift’s ability to command a crowd showed in the set. The atmosphere for her mini-concert was intimate, similar to a friend sharing her compositions to just a bunch of friends and family, with just a guitar and piano by her side.

Glimpses of the crowd’s faces showed them singing along with her. They were having a conversation, a shared experience through music. Even if Taylor Swift does stop writing songs about breakups eventually, it seems impossible for her breakup songs that already exist to stop making an impact among her ardent listeners. JB