Taylor Swift has given fans a first glimpse of her upcoming collaborative collection with fashion icon Stella McCartney, ahead of its highly-anticipated debut later this week. 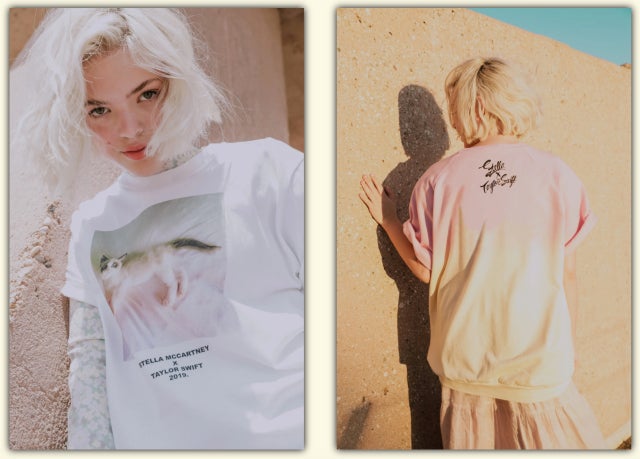 Swift first announced the collaboration in an Instagram Live stream on June 1 — where she also revealed the album artwork for “Lover” — but the singer posted the entire look book for the line on her website yesterday, Aug. 21 prior the launch.

In line with McCartney’s commitment to sustainability, the range has been crafted from eco-friendly materials and features a selection of rainbow and tie-dye band t-shirts, sweaters, hats and bags embellished with lyrics from Swift’s upcoming album and images of her cat, Benjamin Button.

Also posting a picture of herself with McCartney via Instagram, Taylor revealed that she will be sharing more information on the collaboration and a pop-up shop during a YouTube Live event on today, Aug. 22.

The “Stella x Taylor Swift” line will launch in conjunction with Swift’s album on Aug. 23 and will be available at The Lover Experience Taylor Swift Pop Up Shop in New York City from Aug. 23 to 25, with the bomber jacket and bag — which will retail for $1,995 (P104,000) and $795 (P41,000), respectively — to also be available for a limited time at McCartney’s standalone stores.

Prices for the other items in the collaboration have not yet been revealed. RGA/JB