Follow us:
Brad Pitt and Leonardo DiCaprio star in ONCE UPON TIME IN HOLLYWOOD.

DiCaprio & Pitt: A ‘Once’ in a lifetime ‘Hollywood’ team-up

In Columbia Pictures’ Once Upon a Time…in Hollywood, director-writer Quentin Tarantino unites two of today’s greatest stars — Leonardo DiCaprio and Brad Pitt — in a first-ever pairing. They star as TV actor Rick Dalton (DiCaprio) and his longtime stunt double Cliff Booth (Pitt) who make their way around an industry they hardly recognize anymore.

Set in 1969, Once Upon a Time…in Hollywood recreates the time and place of Tarantino’s formative years, when everything – the United States, the city of Los Angeles, the Hollywood star system, even the movies themselves – was at an inflection point, and no one knew where the pieces would land. All this is not entirely dissimilar from the changes buffeting Hollywood today. 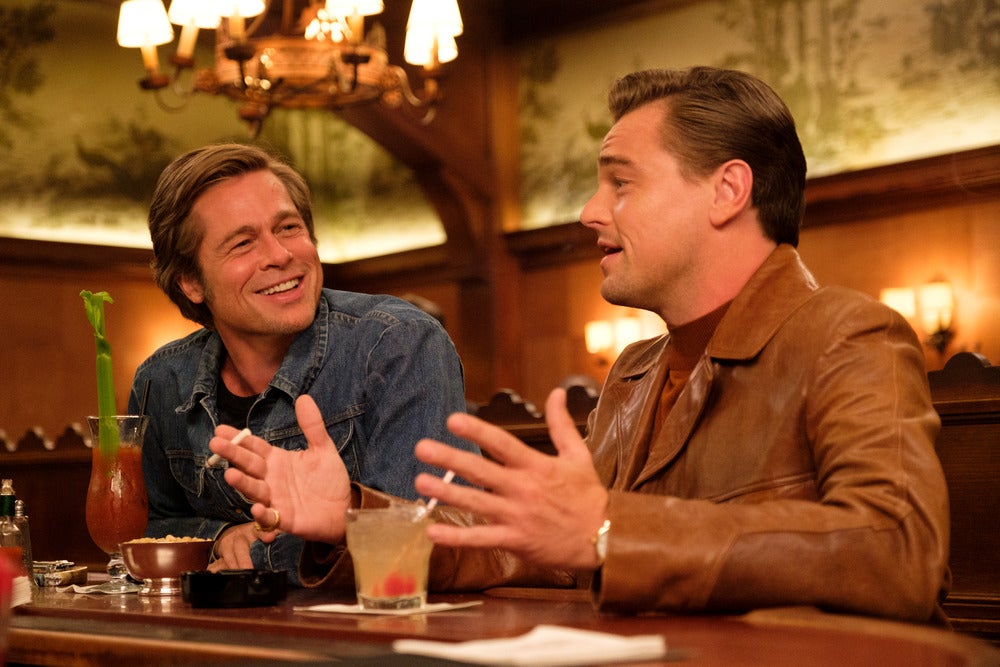 Brad Pitt and Leonardo DiCaprio star in ONCE UPON TIME IN HOLLYWOOD.

At the center is Rick Dalton who had been the star of “Bounty Law,” a hit television series in the 50s and early 60s, but his prophesied transition to motion picture stardom never materialized. Now, as Hollywood moves towards a hippie aesthetic, Rick worries that his time has passed – and wonders if there’s still a chance for him.

“Rick Dalton is a byproduct of the 50s – the 1950s pompadour hero – but now there’s a new era and this train has passed him by,” says DiCaprio. “Working with Quentin, we saw Rick Dalton’s story as a journey of an immense lack of confidence – his inability to be thankful for the position that he’s in and what he’s already gotten. He’s constantly yearning for something more.”

At Rick’s side is Cliff Booth, a former war hero, now Rick’s stunt double. As their careers have evolved and their struggles increased, the one constant for them has been each other. Cliff has proven his loyalty to Rick over and over again, and vice versa – they are the only true family that either has.

“Our characters are based on an actor-stuntman relationship – spending entire careers together was much more prevalent at that time,” says Pitt. “We talked about Steve McQueen and Bud Ekins, who were a strong team with The Great Escape, and we talked about Burt Reynolds and Hal Needham. In fact, we got to talk to Burt about that, which was a real joy. There was just a tighter bond between the two – where we’re more transitory in that way today. Cliff and Rick really rely on each other. The down time is more grueling than the actual work at times, so to have a friend, to have a partner, was all-important. It’s even all-important now.”

“Part of what makes the film so special is to watch Leo and Brad work off of each other,” says producer Shannon McIntosh, who has worked with Tarantino in several capacities for decades. “They’re both fully inhabiting these characters, bringing them to life in a way that leaves you feeling like they are family. For those of us who love making movies, it hits close to home, because ultimately that’s what we love about it: working with these people and forging these lifelong bonds.”

Films about such bonds, and the opportunity for “Butch and Sundance type” casting they afford, are rare in the modern system, so both parts needed to be strong. “I tried a couple of different stories, and then I decided no, I don’t want to put them through some typical melodramatic plot line,” says Tarantino. “I want it to be three rich days in the lives of these characters as they move about Los Angeles, and the conflict of the story builds each day until it reaches a tipping point.”

Watch the film’s new spot below:

In Philippine cinemas August 28, Once Upon a Time…In Hollywood is distributed by Columbia Pictures, local office of Sony Pictures Releasing International.