Why Don’t We Brings 8 Letters Tour to PH

Breakout pop group Why Don’t We is returning to Manila with the new 8 Letters Tour, performing at New Frontier Theater on November 18, 2019 (Monday).

Tickets price starts from Php1,750.00 and tickets go on sale to the general public last 5th September through ticketnet.com.ph and its outlets.

Amassing more than 1 billion global audio streams, 4 million Instagram followers, and total YouTube views exceeding 450 million with over 2.8 million subscribers in under 3 years, Why Don’t We has become one of pop music’s biggest breakout stories. 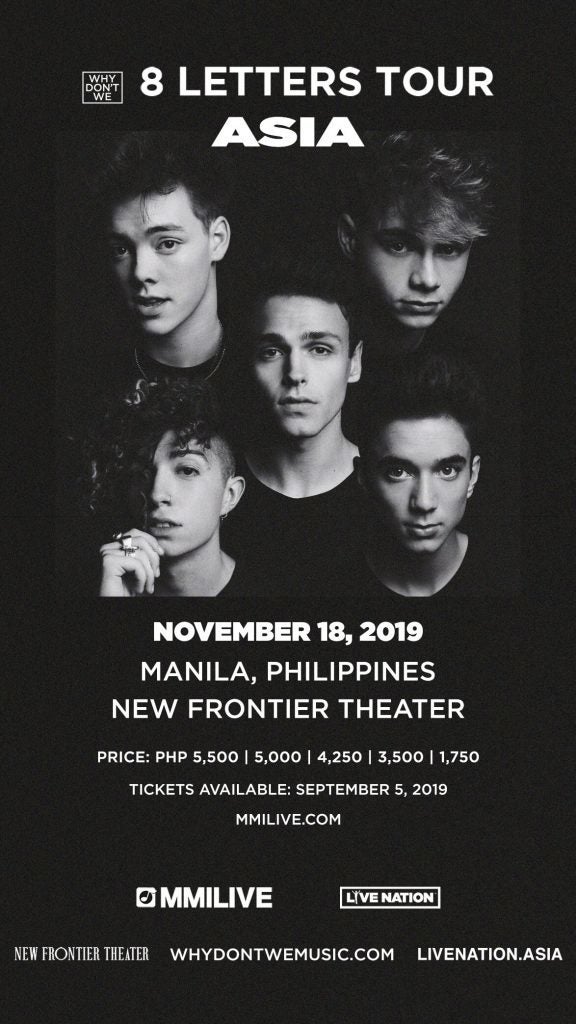 Prior to coming together, the five young men – Jonah Marais, Corbyn Besson, Daniel Seavey, Jack Avery, and Zach Herron – stood out as performer in their own right. Jonah and Corbyn often livestreamed in-home performances to massive audience as Zach served up viral covers that generated tens of millions of views. Jack built a growing a subscriber base on YouTube, and Daniel etched a space in the hearts of viewers everywhere on American Idol.

They crossed paths during tours and fan engagements in the midst of these burgeoning solo careers. Soon, they found themselves on a group text where the idea of joining forces came up. Their collective response: “Why don’t we?”

Taking an innovative and unconventional approach towards releasing new music and actively engaging their rapidly growing fanbase, the prolific young group – the quintet ranges in age from 18-21 years old – put out their first five EPs in under 12 months. The group closed 2017 on a high note, performing on the entire iHeartRadio Jingle Ball Tour, including the New York City stop at Madison Square Garden where they shared the stage with Taylor Swift, Ed Sheeran, Camilla Cabello and more.

In 2018, Why Don’t We released their highly anticipated, debut full length album, 8 LETTERS. The album debuted in the top 10 on the Billboard 200 at #9 and immediately shot to #1 on US iTunes’ Overall Albums chart (along with topping charts in over 20 more territories around the globe) – while the title track is RIAA-certified Gold, hit Top 20 at Pop radio and boasts over 185 million global audio and video streams to date.

8 LETTERS was preceded by a trio of wildly popular tracks, “Hooked,” “Talk,” and, most recently, the album’s infectious title track. The songs have collectively garnered over 43 million streams on Spotify alone in under 3 months in advance of today’s album release; their companion videos have logged an additional 38 million views on YouTube.

In June 2019, Why Don’t We released their sixth new track of the year, “Come To Brazil”. Written/produced in collaboration with JKash (Charlie Puth, Maroon 5) and The Futuristics (G-Eazy, Selena Gomez), the release marks the breakthrough group’s most hands-on studio cut thus far with all five members sharing writing credit on the summer-ready smash.

Known for their prolific and creative output, “Come To Brazil” continues a steady flow of new releases from Why Don’t We – also including collaborative single “I Don’t Belong In This Club” with Macklemore, “Unbelievable,” “Big Plans,” “Cold In LA,” and their soundtrack contribution to STXFilm’s UglyDolls, “Don’t Change.”

Why Don’t We is currently gearing up for their largest headline trek to date, the 8 Letters Tour. Don’t miss your chance to catch their breath-taking live performance!

Why Don’t We Live in Manila

8 letters tour in Asia
MMI Live
New Frontier Theater
Why Don't We
Why Don’t We Brings 8 Letters Tour to PH
INQPOP! Stories we think you might also like: