Follow us:
Photo Credit: Catherine Grilli via Facebook.com/Christina A. Meador

Bride tells maid of honor to ‘wear anything,’ attends wedding in T-Rex costume

Weddings are almost always a joyous occasion for everyone involved. And whether you’re an integral part of the ceremony or you’re just attending for moral support, it is a celebration of love that is often described as sweet and memorable.

However, not all weddings are the same. Some are done with a different sentiment in mind and others are celebrated with peculiar practices. Though a lot of weddings are traditional–with the church venue and a white dress and suit-and-tie combination–others take a more offbeat route. Case in point, this wedding that involves the maid of honor in a T-Rex costume.

Last August 11, Facebook user Christina A. Meador’s sister celebrated her wedding day. But unlike most weddings that have the maid of honor and the bridesmaids wearing the same outfit, Meador decided to show up to her sister’s big day wearing an inflatable dinosaur costume.

On her Facebook post, Meador writes, “When you’re the maid of honor and told you can wear anything you choose…I regret nothing.” 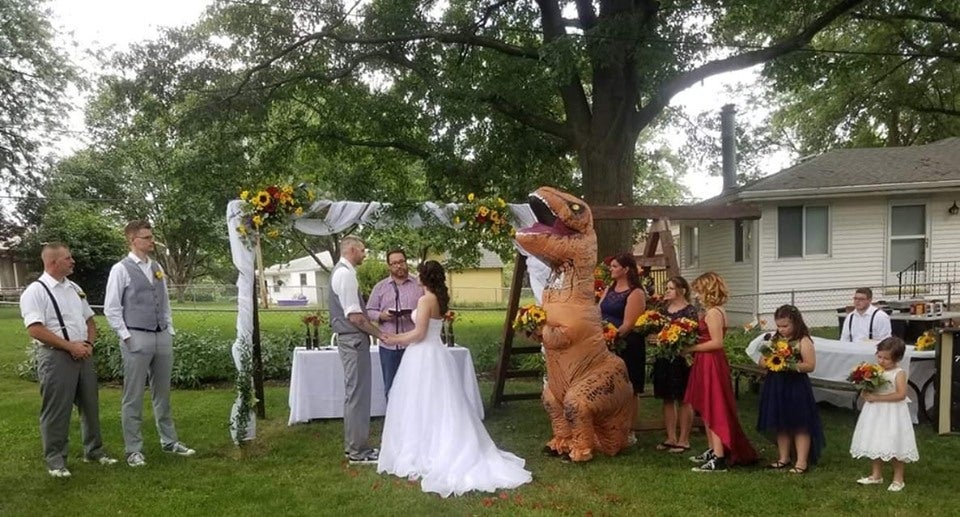 Since the photo has been uploaded, it has garnered over 6,000 reactions, 18,000 comments, and around 36,000 shares on the social media platform. Apparently, many online users just couldn’t get enough of the maid of honor’s funny antics.

Here’s to hoping she got some more hilarious pictures of the wedding in her T-Rex costume!

Italian woman marries herself, proves you don’t need a man to tie the knot

Woman wants to marry antique chandelier she bought on eBay