Mom holds ‘job fair’ for her kids to teach them about money: ‘If you want it, earn it’ 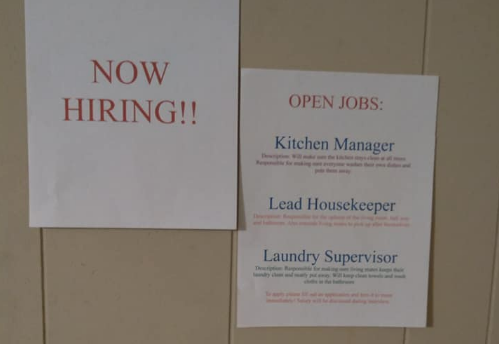 One mother from Georgia, United States, took the creative route when it came to teaching her three kids about money.

Shaketha McGregor shared via Facebook last Aug. 14 that her children had been asking her for new cellphones, trips and allowances. Instead of giving in to their wishes, McGregor decided to hold a job fair at home so they could apply for “jobs” and earn their allowance.

“So, my children continue to ask for a new cell phone, an allowance, and to go places. Yesterday I told them that I’ve heard their requests and that I’ll have a surprise for them today when they get home from school,” McGregor said. “SURPRISE!!! It’s a whole hiring event! If you want it, work for it, earn it! And yes, I also have an in home credit union.”

So, my children continue to ask for a new cell phone, an allowance, and to go places. Yesterday I told them that I've…

McGregor, who is a single mom of three, said she wanted to do something different to make her kids work for what they want, as per Good Morning America on Aug. 20. And her creative efforts were not for naught, as her Facebook post has earned praise and gone viral since the time of posting with over 212,000 reactions and almost 130,000 shares.

“I was like I don’t want to just give it to them,” she said in the report. “I want to do something different to make them work for it this time around so they will appreciate it more.”

Her children Jahkeem, in seventh grade, Takeia in fifth grade, and Serinity in first grade chose among the jobs kitchen manager, lead housekeeper and laundry supervisor. They were made to fill out application forms and have interviews with their own mom. Upon being welcomed to their new “jobs,” McGregor conducted orientation sessions and gave her kids their own name tags.

I can't believe my post went viral! 😂😂😂 Well you guys, the interviews are done and I'm still laughing!!! I'm going to…

If anything, McGregor wants her children to be familiar with the application and hiring process for when they get older.

“Whether they’re applying for school or a new job or something, they can look back and say, ‘I did this with mom all those years ago,’” she said.

The setup is going well so far, as per McGregor, sharing it has allowed her to have more bonding time with her kids and at the same time, impart important life lessons to them.

“It’s all about finding what works for your family and listening to your kids. Really talk to your children and see some things that they’re really interested [in] and find out how those can be implemented around the house and into life lessons,” McGregor said in the report. “What I’m realizing is kids just want to be counted and to be part of something.”  Cody Cepeda /ra

Is doing household chores really the key to a child’s successful future?