From its humble beginnings in 1934 at the University of the Philippines College of Medicine, the Mu Sigma Phi Sorority has continued to uphold a legacy of unparalleled sisterhood, self-denying service, outstanding scholarship, and dedicated leadership for 85 years and counting. In celebration of these 85 glorious years, the sorority has prepared a line-up of events under its chosen advocacy to empower the geriatric community, including — after a decade’s wait — the much anticipated Brilyante.

The first Brilyante was held in celebration of the Mu Sigma Phi Sorority’s 75th year. It was a benefit gala dinner and fashion show, directed by no less than one of the country’s busiest fashion directors, Mr. Robby Carmona himself. It was an unforgettable night in which distinguished designers, celebrity models, and prominent physicians from the Mu Sigma Phi Sorority and Fraternity all came together to brave the runway in tribute of the women who have fought or are continuing to fight the battle against cervical cancer.

Joined again by Mr. Carmona on its 85th year, Brilyante 2019 aims to showcase a history of women empowerment, shedding light on issues on self-image and longevity. The fashion show will feature works from some of the country’s celebrated designers Albert Andrada, Mak Tumang, Michael Leyva, Rajo Laurel, Edgar Madamba, and Nina Inabel. Proceeds from the benefit event will go to the Institute on Aging of the National Institutes of Health, in support of its project to develop 27 national geriatric centers across the country through health and human resource training.

Brilyante 2019 will be held on August 31, 2019 at the new five-star Sarus Grand Ballroom of Marquis Events Place at Bonifacio Global City in Taguig. Tickets are priced at Php 6,000 for Gold and Php 4,000 for Silver, entitling you to a three-course meal and a souvenir program. Join the Mu Sigma Phi Sorority on its 85th year as it proves that age is no limitation — that with each passing year we only become more brilliant, more luminous through time. Order your tickets now at bit.ly/ticketsbrilyante or text Trina Villanueva at 0917-676-7166. You can visit Brilyante’s facebook page: fb.me/Brilyante2019 for more details. See you there! 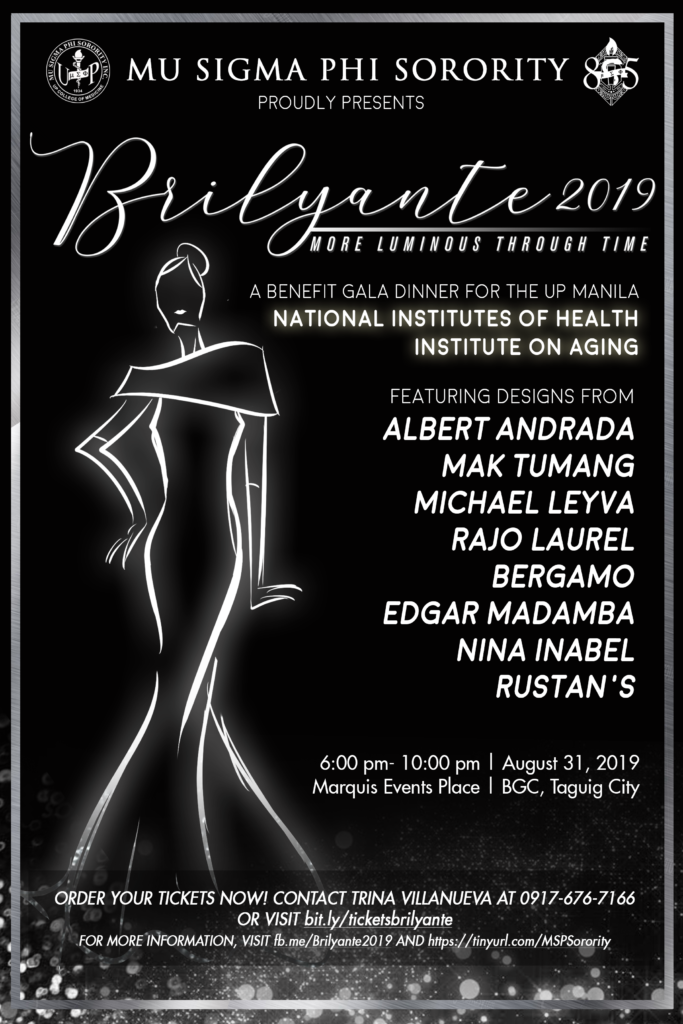