The footwear series, which takes inspiration from the beloved show’s characters, will see the duo collaborate with Nickelodeon to create five versions of the Kyrie 5 and Kyrie Low 2 sneakers, with the merchandise to be available for purchase from next month. 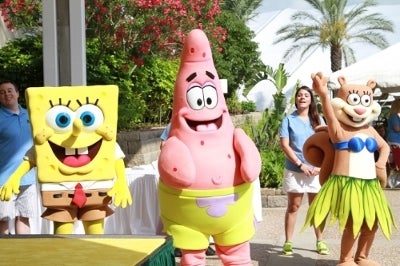 The key style, which takes after the show’s titular character, sees a Kyrie 5 sneaker fashioned to look like a sponge with a yellow polka dot pattern and a red and brown sole that mimics his uniform suit, with an image of SquarePants himself featured on the inside soles; while the style taking after his best friend Patrick Star is designed with a pink polka dot pattern featuring a green and purple sole that resembles the swim trunks the character is seen wearing.

Completing the collection, SpongeBob’s other friends Squidward Tentacles, Mr. Krabs and Sandy Cheeks will also guest star in the limited sneaker series, with the other sneaker styles mimicking their signature colors in red, turquoise and white designs.