This resolved Garfield mystery has the Twitterverse feeling nostalgic

In 1978, American cartoonist James Robert Davis created one of the world’s most iconic comic strips, Garfield. Aside from being a pop culture favorite, Garfield also became a sensation in the licensing world. As a matter of fact, it holds the Guinness Book of World Records for being the most widely syndicated comic strip—with a myriad of record-breaking best-selling books and award-winning animated television series and specials.  Not to mention their 263 million newspaper readers worldwide and licensed products like toys, backpacks, costumes, and credit cards to name a few.

The comic strip chronicles the life of Garfield, a lazy, orange and black tabby cat, who lives in Indiana with his human companion named Jon Arbuckle and Odie the dog. Although it has been 41 years since it was published, this Monday-hating cat is still relevant for Baby Boomers and Millenials alike.

Recently, this grumpy cat has been making headlines after a farmer named René Morvan revealed the answer to this Garfield plastic phone mystery–which has been blanketing the French coast for 35 years now. 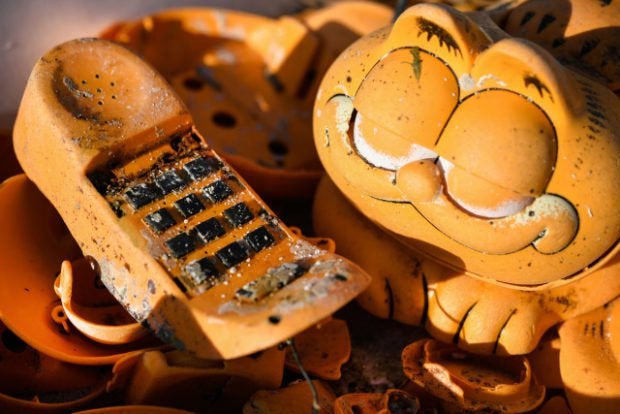 While the issue highlights nothing but the severity of plastic pollution in many parts of the world, Twitter users shared how the said mystery also elicited nostalgia.

My grandmother would have LOVED this phone! She was buried (at her request) with the stuffed Garfield toy she'd received as a gift years before. She was a longtime fan of the lasagne-loving feline.

My granny had lots of Garfields too! And pigs, little ceramic and crystal pigs!

I really wish they never would have found the source. It was kind of fun to just have them washing up, randomly, on the shore. (Not the whole plastic-in-the-ocean thing, but the whole Garfield phone thing.)

Only if you don’t like Garfield. If I knew about this beach, I would have camped there for the free phones.

Would you believe a friend sent a link of this story to me earlier? It’s such a great yarn. If I found a shipping container of old Garfield phones I’d be over the moon.

For an 80s kid, this feline phenomenon might seem like a dream–however, the shocking and longterm impacts of plastic pollution in the ocean continues to be a global crisis that we all need to act upon.

After the PCGA’s coastal clean-up drive, Manila bay is still covered in trash